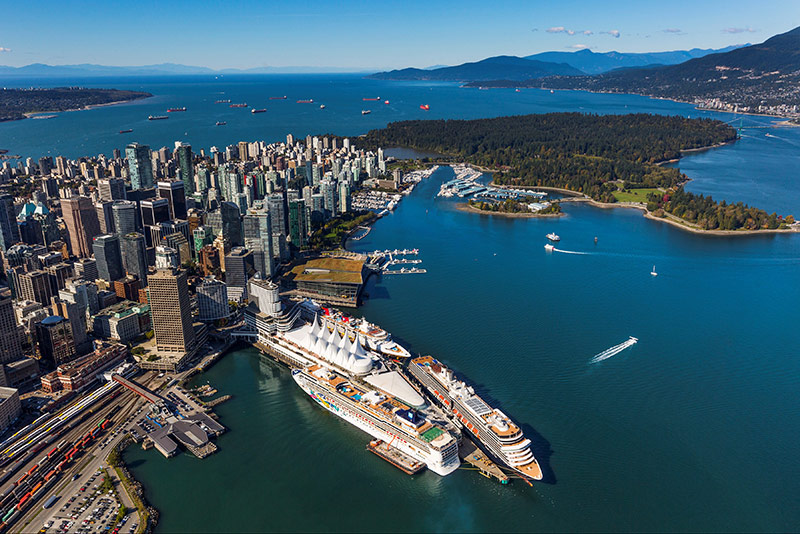 For the 2023 season, Vancouver is expecting a record 334 ship calls, most of which are homeported, according to Mandy Chan, manager of cruise services for the Vancouver Fraser Port Authority.

“This will be a 9 percent increase over last year,” she said, “which means we could get more than 1.3 million passengers. That would be a new record for us, assuming the ships sail full.

“We are also expecting a 33 percent increase in three- and four-ship days,” she continued.

“We are happy to see that the ships keep coming. Vancouver is a lovely destination to visit before or after an Alaska cruise; we have efficient transportation between Canada Place Cruise Terminal and the airport; lots of hotels; fine restaurants; and Alaska is a big draw.

“We had no ships in 2020 and 2021; meanwhile, we laid the foundation for their return with lots of good work with our tourism industry partners and with our local, provincial and federal governments.

“We had a record number of ships last year, 306 calls in total, which was a 6 percent increase from 2019. While we did not expect the ships to sail at full capacity starting up, we did end up with 815,000 passengers, representing 70 percent of what full capacity would have been.”

The port’s previous best year was in 2019 with 1.1 million passenger visits.

The 2022 season ran from April 10, with Holland America Line’s Koningsdam being the first ship call, until November 2, with the last sailing of the Crown Princess.

With all the major operators in the Alaska market homeporting in Vancouver, the port also saw several newcomers, including luxury and expedition ships.

Vancouver announced recently that it is participating in a project along with Seattle, Juneau and several cruise lines to explore the feasibility of creating a “green corridor” from Washington State to British Columbia and Alaska to reduce greenhouse gas emissions.

In 2022, nearly 70 percent of the ships calling in Vancouver were shore power enabled, and most plugged in, compared to 50 percent in 2019. With three berths at Canada Place, two are equipped with shore power.

Work also continues exploring a new cruise terminal to complement Canada Place. The terminal is being considered on the Fraser River, where larger ships would not have to contend with the Lions Gate Bridge, Chan explained.

“It’s exciting to be back in business again with cruise, and I am hopeful we can continue to work with our cruise, tourism and government partners to bring innovation to this industry to resume the work of building a successful and sustainable future for cruising in Vancouver.”

Unique Airbnb stays around the Philippines – Travel Up

What Camping in France Is Like (This Campsite Blew Our Mind!)

Unique Airbnb stays around the Philippines – Travel Up