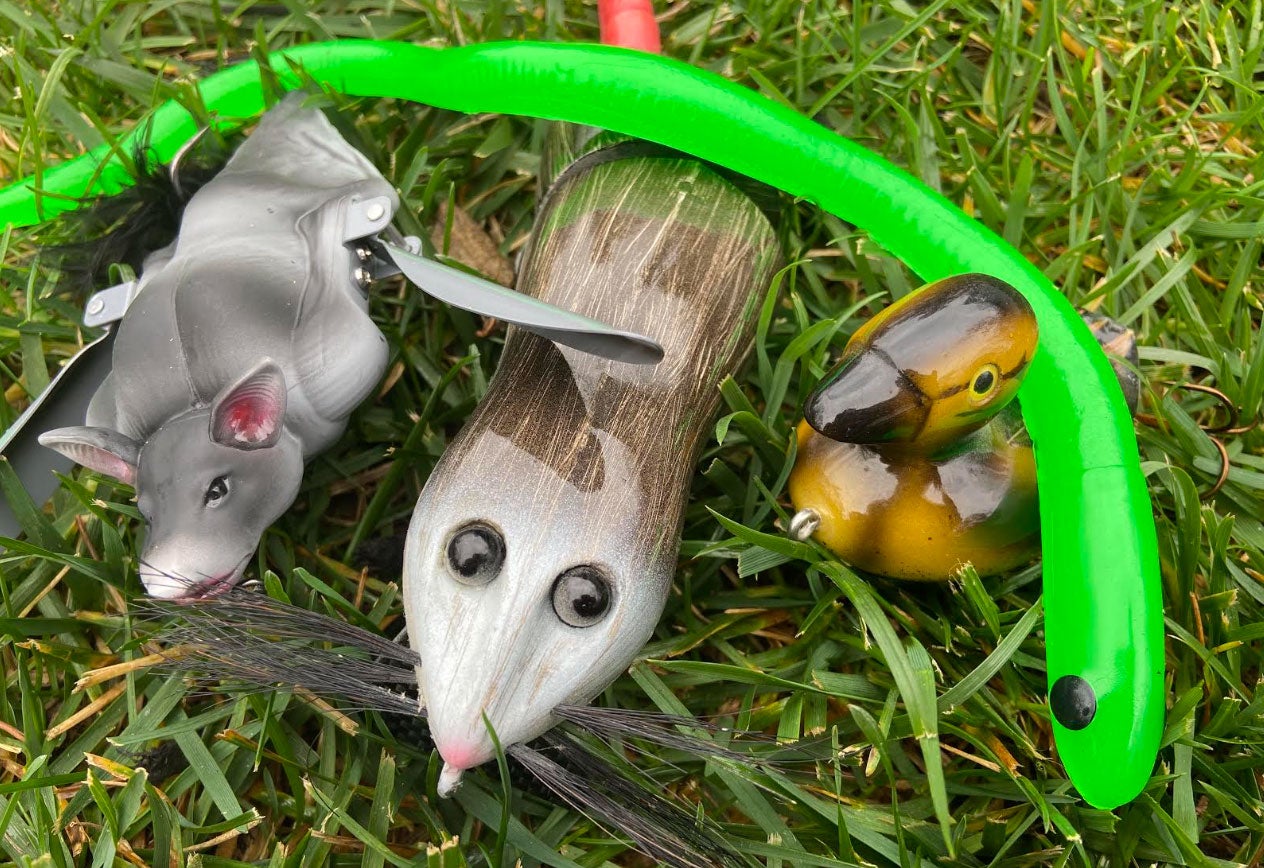 In late October, For The Win ran a story about angler Adam Young, who was fishing in Florida when he caught a largemouth bass on—of all things—hotdogs and bread. The fish only measured 16 inches, but it made the news because of the video Young shot as he pulled a 22-inch garter snake out of its throat. Whenever a critter is discovered in a fish, it tends to get its 15 minutes of fame on social media, even though anglers understand fish are opportunistic and will at least attempt to eat all kinds of odd prey if they think they can get their mouths around it. This infatuation with fish eating land animals, however, is strong enough that it’s sparked an entire category of gimmicky lures that mimic everything from bats to topwater lizards to parakeets.

But are these lures really worth having in your arsenal? With the exception of frogs which fish eat all the time, I don’t believe so. To better explain why, let’s break down the three most commonly seen mammal patterns and their pros (if any) and cons. And yes, snakes are included.

I can’t tell you how many emails and messages I’ve gotten over the years asking about duck lures. People want my opinion about them, or specifically ask where and when to use them. My reply is always the same: “Cast it 20 or 30 times, then cut it off and put on a lure you know catches lots of fish.”

What I’m not suggesting with that statement is that duck lures can’t catch fish. The reality is, if you rig a hook on a set of ear buds or a garlic press or a root beer can and drag it around long enough, eventually you’re going to get a fish to at least swim over and look at it. Sometimes, of course, it happens quickly. Case in point, I had a buddy that threw a duck in Wisconsin for muskies, and it got hammered on the third cast. He thought he just figured out the secret sauce. Three days later, that surface-buzzing waterfowl hadn’t been sniffed again.

With rare exceptions and in certain locations where pike, bass, or muskies are truly keyed in on young-of-the-year ducklings bobbing around, you’d only throw a duck lure because you want a photo of it hanging out of fish’s mouth for Instagram. Most of the time, however, a less clunky popper or Spook or buzzbait would have caught the same fish that ate that duck. Does that mean a duck eat isn’t cool? Hell no! But anyone who claims a duck is the first thing they tie on because it outfishes everything else all season long is quacking nuts.

Four or five years ago, rats infested the fishing scene. From mass-produced models like the BBZ Rat to custom lures like the CL8 Water Vole, anglers seemed consumed with the idea of appealing to fish that craved a warm-blooded, furry meal. I drank the Kool-Aid as well, at least partially. I know for a fact certain fish won’t hesitate to grab a rodent, it’s just a question of what kind of rodent is on the menu.

I’m very into the challenge of flyfishing for trout after dark with mouse flies. These patterns, however, are very small, measuring less than 3 inches. They are highly effective, though I’ll be the first to admit that I don’t believe a trout recognizes the waking fly as a mouse necessarily, but more as just a target. It’s something alive and wiggling that could be food. Maybe they do think it’s a mouse, but it could just as easily double as a toad, or Dobson fly, or minnow swimming up high. All that matters is, they eat it.

These surface-waking rat lures, on the other hand, routinely measured in at 12 inches or longer. They required heavy rods to throw. The funny thing is, there are plenty of shots out there of these baits hanging in the mouths of giant bass, far more than ducks. The caveat was that these were often taken in places like California and Texas that are loaded with truly giant largemouths. In these locations, bass were already accustomed to hammering huge trout-shaped swimbaits and grabbing big meals. So, do they also crave rats? I don’t think so, but that doesn’t mean they weren’t attracted to the sexy wake and wobble of these lures. Had they been made up like iguanas or baby gators, the results would have likely been the same. What happened during the rat craze, though, was many anglers bought in thinking they’d pull a 7-pound rodent eater out of their local lake. Did that happen for some folks? Yes, but there are also lots of rat lures collecting dust in garages all over the country.

Every couple of years there’s a bit of a snake revival. A long time ago, I received a care package from Southern soft-plastic lure maker that swore up and down his 15-inch snake was a secret weapon for monster bass. Last time I checked, KVD isn’t hucking that cobra on tournament day. Likewise, when Savage Gear unleashed their 3D Wake Snake hardbait a few years ago it got press all over fishing media. Measuring 8 inches and featuring 11-joints, the bait made jaws drop as it slithered across the surface in promo videos. How many fish jaws it made open, however, is debatable.

I couldn’t even begin to count how many snakes I’ve watched wiggle across the water. I’ve seen water snakes in bass ponds, garter snakes in pickerel bogs, and even baby rattlers swim across rivers chock full of big brown trout. Every time it happens, I’m giddy, waiting anxiously for the serpent to get jacked. To date, I’ve never seen the deed go down.

Obviously, it does. There’s a strong possibility you’ve witnessed a snake getting sucked off the surface, and Adam Young’s snake extraction landed him in USA Today. But the bottom line is it’s hard to talk yourself into using these oddball mammal lures based on their prevalence as food sources. They will all get bit at some point or on the right day just like those Atomic Beam solar powered motion lights will make your driveway a little brighter. It just won’t be as bright as Yankee Stadium like the commercial would have you believe.

The Best Time to Buy an ISLE SUP Is Right Now

10 Awesome Tools To Monitor Your Business While Traveling

10 Awesome Tools To Monitor Your Business While Traveling