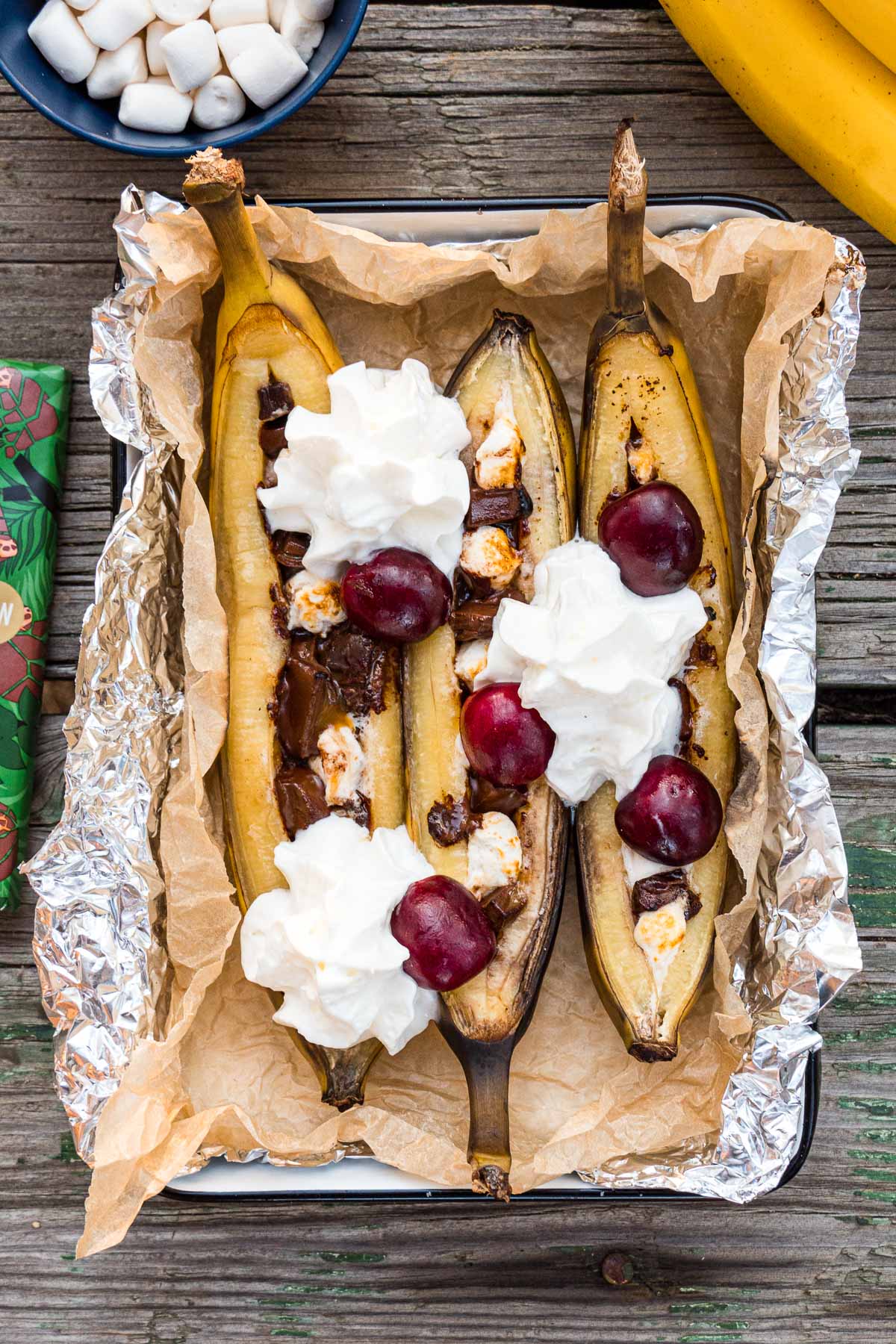 Looking for a new camping dessert? How about a Campfire Banana Split! Banana, chocolate, mini marshmallows, whipped cream, and cherries!

One of our favorite (non-s’more) campfire desserts are Banana Boats. Basically slice a banana down the middle, stuff it with chocolate, marshmallows, and other goodies, wrap it up in foil, and place it in the campfire embers.

The result is a delicious, gooey, chocolate-y dessert that you can eat with a spoon! This Banana Split variation takes it one step further, by using caramel chocolate and adding whipped cream and cherries.

So if you’re looking to switch up your campfire dessert options, give this foil-wrapped Banana Split a try!

Banana: The ideal banana for making a banana boat is one that is uniformly yellow. Not under-ripped (green sections) or over-ripped (brown spots), just a solid evenly ripened yellow.

Chocolate: We used Endangered Species chocolate bars because we love all the great varieties they offer, plus really love their mission of giving back to support animal conservation. We used the Rich Caramel + Milk Chocolate for this particular recipe (the Fudgy Peanut Butter bar is another favorite).

Whipped Cream: As much as we’d love to have ice cream when camping, it’s just not a practical idea. Even if kept in a cooler loaded with ice, it is still slowly melting. The temp in a cooler is ALWAYS slightly north of 32 degrees. That’s why whipped cream is the next best option. Go for the extra creamy stuff for a more ice cream -esque experience.

Cherries: You can pack along a jar of bright red maraschino cherries if you want, but we opted with fresh cherries instead. You’ll only need a couple and fresh cherries are just better for snacking on a campsite.

Aluminum Foil: In order to “bake” the bananas, you’ll want to wrap them in aluminum foil. The banana peel contains a lot of moisture, so it’s hard to overcook them, but the foil helps keep everything together.

Parchment Paper: We like to use a parchment paper line for most of our foil packet recipes, but for this particular recipe it’s kind of optional. The banana peel provides separation from the aluminum foil.

Long Handled Tongs: The best way to place and adjust these banana boats on a bed of hot embers is with a pair of long handled tongs.

How to Make Campfire Banana Split

Using a knife, carefully cut a line down the center of the now exposed banana. You want to cut all the way through the banana but not through the peel in the back.

Gently compress the banana to flex open the cut line

You can now stuff your banana with chunks of chocolate and marshmallows. Over stuffing is totally fine because as the chocolate melts it will more uniformly fill the crack.

Once you have your banana filled with all the chocolate you want, it’s time to prepare it for the campfire.

As we mentioned above, the parchment paper step is totally optional, but we’ll show you how to do it here.

No need to worry about covering the top stem.

The best way to roast these banana boats is to place them on their backs in a bed of hot embers or coal. The aluminum foil should keep all the contents contained, but you will probably want to avoid inverting them at any point, lest the chocolate and marshmallows melt out.

The even, consistent heat of the embers will ensure that they cook evenly without developing any intense hot spots.

All they need is a few minutes on the embers (4-6 minutes) and they should be ready to eat.

Once they come out of the fire, the banana’s will need a few minutes to cool down. Then you can unwrap them, add a dollop or two of whipped cream, and top with a few cherries. That’s it!

Grab a spoon and dig in! What Is an Old-Growth Tree Actually Worth?

37 Fabulous Free Things to Do in NYC (By a New Yorker!)

Douglas Mawson, Antarctic Explorer, Refused to Die Out on the Ice

Overview and Things To Do

Overview and Things To Do