Lost in the northern wilderness 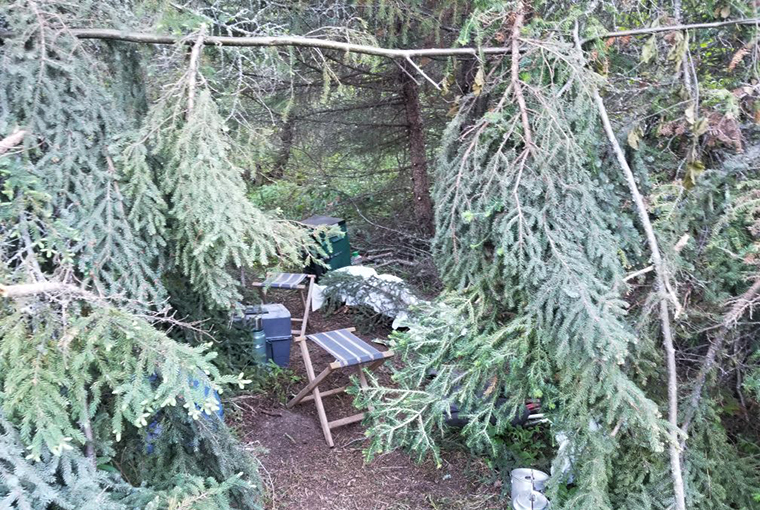 Fishing trips usually lead to stories about the biggest fish or the one that got away. Two American anglers, however, will long remember this year’s excursion for a different reason, after becoming lost near Hornepayne in northern Ontario last month.

After finding out about the rescue near my camp, I contacted the OPP to find out more information. I was then able to reach out to one of the anglers, James Bretz in Indiana, who spoke about his time in the Canadian wilderness. Here’s what he had to say.

Ronald Jerrett, 88, and James “Jimmy” Bretz, 79, have traveled from Indiana to fish the pristine wilderness surrounding Hornepayne for the last 50 years and in that time, have grown to love the land, water, and people. This year, they brought a 2010 Sunseeker RV and towed an Argo ATV, with hopes of returning to isolated lakes full of big walleye.

Jerrett and Bretz were nearing the end of their journey when they decided to take one more trip out on their Argo, heading northwest, looking for a different lake. They had set up camp on a gravel pit near Little Chelsey Lake. The ATV trails enabled them to push deeper into the wilderness and cover a lot of distance.

During a stop at a small clearing to check their whereabouts, they realized their GPS was no longer working. They had a compass, but not a map, and were far back in the woods on a twisting and intersecting maze of trails. They had become lost.

The men were prepared for a shore lunch, so they had cheese, crackers, granola bars, and cans of Vienna summer sausage in case they did not catch fish. They never made it to the next lake. “The bush was so thick and green that if you were to walk 100 feet into it, you’d be lost for sure,” Bretz said.

As the sun set, they decided to make a shelter in the slight clearing and hope someone would come by in a day or two. Some 50 years of camping had taught them to make a decent camp. They used their chainsaw to fell several long skinny trees and attach white garbage bags that they brought for the fish. Afterwards, they hoisted their makeshift flags high up in the air hoping a plane may spot them and radio for help. They never did see a plane.

Fortunately, they “had enough food, not really ever being hungry. But thirsty, man, we were thirsty,” Bretz recalled. Their only source of water was a depression in the trail where they had noticed dark soil from the spring’s high-water level. They dug down about an arm’s length deep and watched as it slowly filled with water.

“Dark, muddy water,” Bretz said with a light chuckle. “It was sure dark, muddy water, but after you let it sit for most of the day, well, it was still dark and muddy, but less so, and the bottom line is, it was the only water we had, so we drank it.” Eventually, the water hole ran dry, and despite trying to dig more holes, the men found no more water.

After six nights and seven days, the men were found by two members of the OPP Emergency Response Team (ERT). The two officers on ATVs noticed the white garbage bags, dismounted and shut their engines off to hear better, and walked right into the makeshift survival camp.

The men had no water and little food when they were food. It was nearly an hour drive out of the bush and back to camp. The men, barely able to walk due to dehydration and exhaustion, were assisted into an ambulance to be seen by waiting paramedics.

Bretz voiced his gratitude to the two OPP officers who rescued them. Unfortunately, he didn’t get their names.

Should have brought more water

I asked him what he thought the men did right to help facilitate their survival. “We both had Gortex rain suits we brought with us on the Argo. They kept us warm and dry, and the hoods pulled up tight at night gave us some relief from the black flies and mosquitos. Although, after three or four days, the bugs either let up or got sick of the taste of us,” he said.

When asked what he would do differently next time, he pointed out they should have brought more water, or a water filter. “That would have made a big difference. I should have also brought a paper map and perhaps my own GPS, batteries, and a compass as well. I relied on my friend and eventually, everything breaks.”

At the end of our phone conversation, I asked if he will return to northern Ontario next year. “Initially we had decided no, but June is another year away and the fishing up there is some good, so we’ll see,” he responded. I mentioned he was welcome to visit me at my camp just west of Hornepayne to which he replied, “you got pickerel in that lake?”

“Heck ya,” I said, with an edge of Canadian pride.

“Well then, I think you should call me Jimmy,” he replied at the end of the telephone conversation.

The OPP offered the following tips and information for anyone planning a wilderness trip.

The OPP contributes to the search and rescue for injured or lost persons in many different ways, including coordinating and conducting ground searches in wilderness areas in Ontario. Members of ERTs, canine units, and aviation services are often part of that response.

It is everyone’s responsibility to make sure they are prepared when travelling in the wilderness and to appropriately manage any risks associated with wilderness recreational activities. Our best advice is to properly plan for contingencies, be prepared for worst-case scenarios, and take along appropriate equipment/clothing.

Anyone planning a wilderness trip or risky recreational activity should:

For detailed information on emergency preparedness during wilderness trips, visit the national AdventureSmart program at: www.adventuresmart.ca

Paul Prowse is the secretary/treasurer for the OFAH Zone J, a captain in the London Fire Department, and camp owner in Hornepayne.

Snoopy Island (Fujairah) – Things to Know Before You Visit

Snoopy Island (Fujairah) – Things to Know Before You Visit