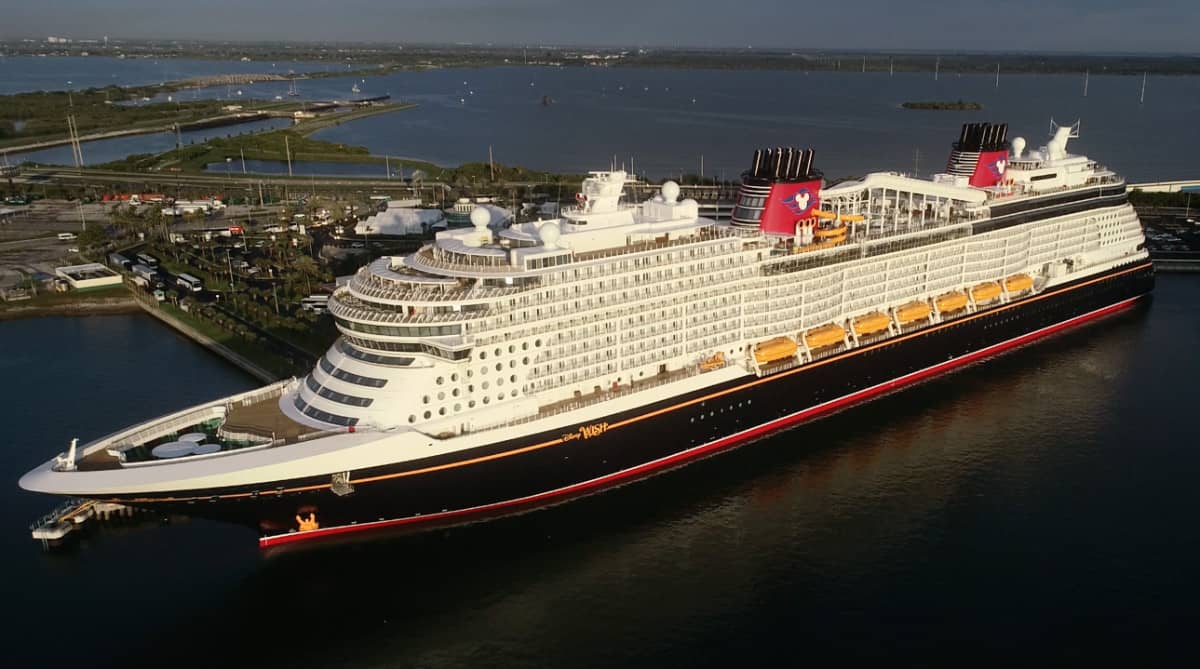 Disney Cruise Line has celebrated the christening of its new flagship, the Disney Wish. The ceremony took place at the ship’s homeport of Port Canaveral, Florida on June 29th.

It comes as the vessel just recently arrived in the U.S. for the first time and prepares to begin guest sailings in mid-July 2022.

The New Disney Wish was christened at an event that took place at her homeport in Port Canaveral, Florida. The ceremony streamed live online on Wednesday morning and it comes after six years the new Disney ship has been in development.

The ceremony began with celebratory dances and performances, including Captain Minnie and Captain Mickey present in cruise attire, displaying the Disney Cruise Line magic. “This really is a wish that comes true,” said Chief Executive Officer of The Walt Disney Company Bob Chapek.

The magic of storytelling was unraveled in the Disney Wish christening. Chief Executive Officer of The Walt Disney Company Bob Chapek described Disney Wish to feature Princess Cinderella in its main hall and technological features aboard “that can’t be found anywhere else.”

Although Disney Wish’s christening had loads of Disney tradition, there were several twists to the event. Not only does the ship feature multiple godmothers, Mariah Carey, Patty Disney, Tinkerbell, and Jennifer Hudson, but for the first time in Disney Cruise Line’s history, Make-A-Wish children were chosen as godchildren of Disney Wish.

Chapek said, “Make-A-Wish children and their families are brave, determined, resilient, and some of the most inspirational people you could ever meet. Wishing is a transformative experience that brings hope and joy, and it is our privilege to proudly recognize children who strive to overcome challenges as our Disney Wish godchildren.”

“Working with Make-A-Wish to support children with critical illnesses and making magic when it is needed most will always be a priority for The Walt Disney Company,” Chapek added.

Three of the history-making Make-A-Wish godchildren, Colby, Megan, and Jenna, took part in the christening ceremony, reciting heart-felt blessings over the ship.

In partnership, Disney and Make-A-Wish have helped grant life-changing wishes for more than 145,000 children. Beginning in 1980, wishes have been granted with visits to Disney destinations across the globe and Disney Cruise Line sailings.

Following the blessings, Anika Noni Rose, the voice of Princess Tiana in The Princess and the Frog, gave a performance of the Disney song “Wishes,” a crowd favorite.

The end of the event presented a traditional breaking of a champagne bottle, accompanied by festive music and fireworks.

Featuring 25 entertainment venues, Disney Wish, will set sail on its maiden voyage to the Bahamas on July 14, 2022. As the fifth ship in the fleet, it will operate three- and four-night itineraries to the Bahamas, including Disney’s own private island Castaway Cay.

Disney Wish was welcomed in the U.S. for the first time with a traditional water cannon salute from Port Canaveral’s Fire Rescue Fireboat 2, Monday, June 20, 2022, along with many fans who gathered at Jetty Park.

It features AquaMouse, Disney’s first attraction at sea. It also has an exclusive restaurant onboard, the Arendelle, A Frozen Dining Adventure, serving as the next sequel to Frozen, bringing each guest into the world of the ever-popular film.

Built at the Meyer Werft shipyard in Germany, the 144,00-gross-ton ship accommodates 2,500 guests at double occupancy. Disney Wish is the first out of two LNG-powered Triton-class cruise ships.

A Guide To The Best Greek Wine