The story behind Montaigne’s Statue in Paris 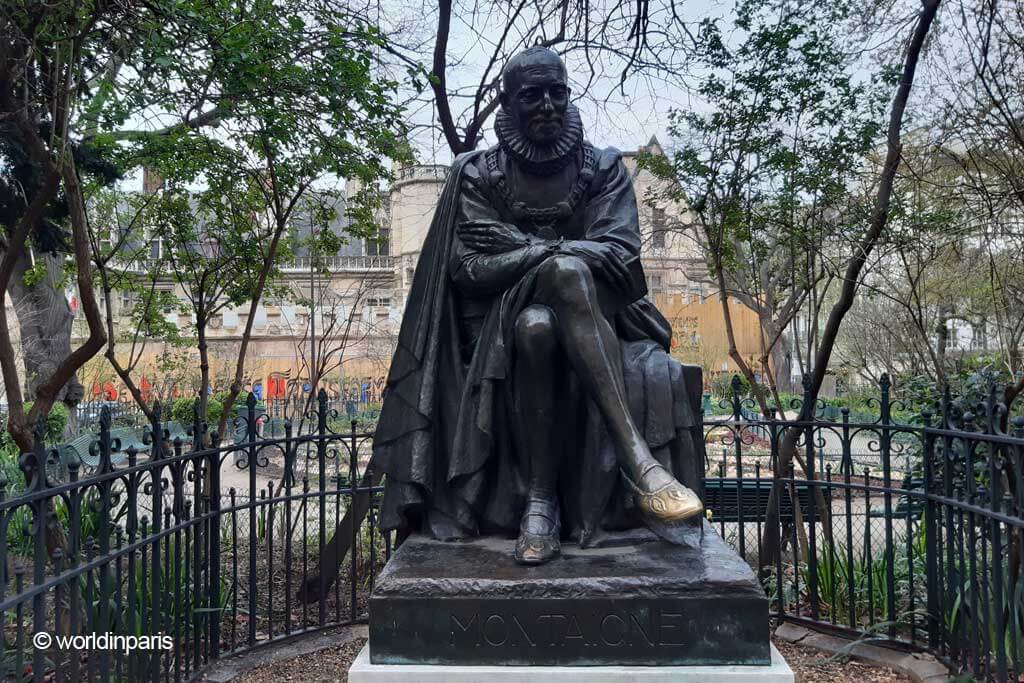 If you decide to visit the Musée Cluny (Medieval Paris), which we recommend, don’t miss the opportunity to have a quick look at Square Paul Painlevé, located a few steps away from the museum entrance, opposite the Université Sorbonne.

Here, we are in the Latin Quarter, the students’ neighborhood. In Medieval Paris, this area in the 5th Arrondissement of Paris was the heart of the first universities in Paris, and students used to have lessons in Latin, hence the neighborhood’s name.

But let’s go back to the square Paul Painlevé. This shady square is dominated by the bronze statue of Michel de Montaigne (1533-1592), who was one of the most significant philosophers of the French Renaissance and had a direct influence on famous writers and intellectuals such as Albert Camus, Charles Darwin, René Descartes, Friedrich Nietzsche, or Marc Twain to name a few. During his life, Montaigne explored in his “Essays” a wide of topics related to life, from friendship to fear, from passion to death. He is also known for his skeptical saying, “What do I know?”

Curious wanderers may notice that Montaigne’s right shoe is much more used than his left shoe. Indeed, tradition (or superstition) says that touching Montaigne’s right foot before an exam while saying, “Salut Montaigne!” (Hi Montaigne!) will bring good luck so it is a kind of “must” with the students of the Latin Quarter with pre-exam nerves. And by the color of the shoe, with a shiny copper yellow, it seems to work!

This Montaigne statue in Paris is a bronze replica of the 1934 stone original from sculptor Paul Landowski to commemorate the 400 years of Montaigne’s birth. Unfortunately, the original statue of Montaigne did not survive the vandalism and the student revolts of the sixties in Paris. After different (and expensive) repairs, it was replaced by the current one in bronze in 1998.

On the sides of the pedestal, visitors can read the history of this statue (in French) and the name of its main sponsors. On the front, the name Montaigne is followed by one of Montaigne’s famous quotes: “Paris a mon coeur dès mon enfance. Je ne suis francais que par cette grande cité. Grande surtourt et incomparable en variété. La gloire de la France est l’un des plus nobles ornements du monde” – Paris stole my heart since my childhood. I am French only because of this great city. Especially great and incomparable in variety. The glory of France is one of the world’s most noble garments.

There are other lucky statures in Paris. One of the most famous is the statue of Dalida in Montmartre. We pass by this statue and tell you about its story in this Montmartre walking tour.

What to See Near Michel de Montaigne Statue, Paris?

About World in Paris

Quirky Parisian explorers with a preference for the lesser-known sights, we are continuously looking for new ideas and tips to bring you the best of the City of Light.

The Cult(ure) of Luxury ⋆ SECRETS OF PARIS