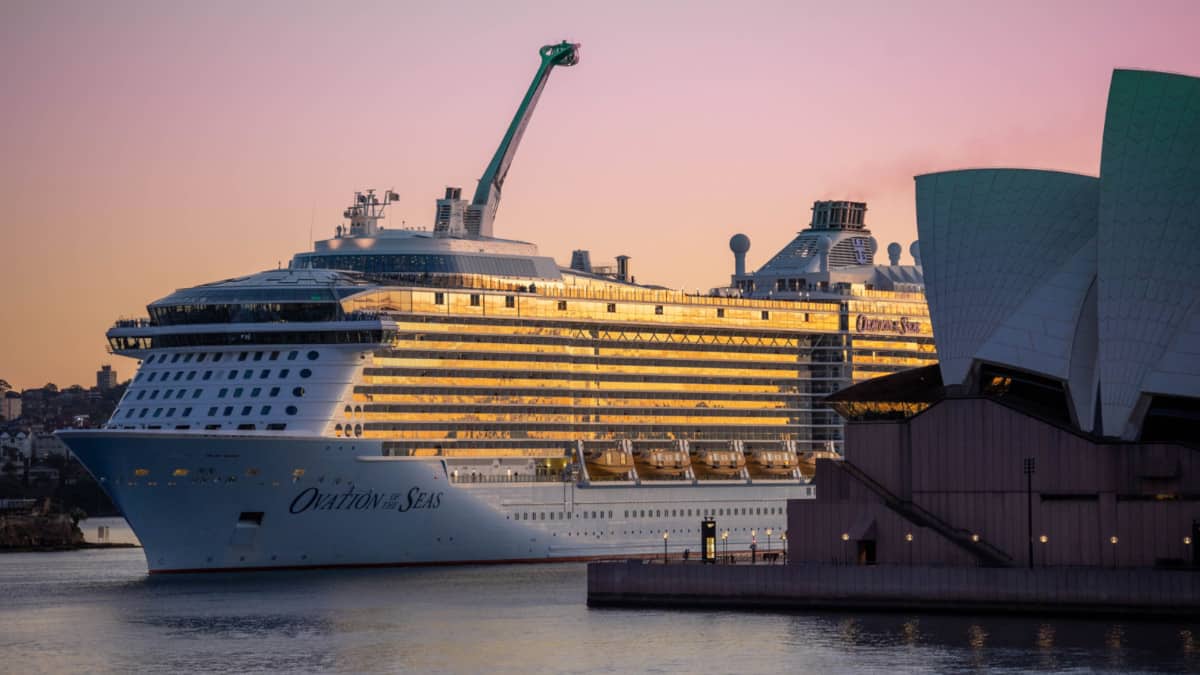 After waiting since 2019 to sail onboard a Royal Caribbean cruise ship, Australians welcomed the arrival of Ovation of the Seas to Sydney on October 29.

This will be the sixth season for the Quantum-class ship down-under, offering cruises varying in length between two and twelve nights to Australia, New Zealand, and the South Pacific islands.

Ovation of the Seas offers holidaymakers everything they could wish for, from bumper cars to a climbing wall and even a surf simulator. A second Royal Caribbean cruise ship, Quantum of the Seas, will arrive in Australia in a few days, on November 1.

Ovation of the Seas Arrives in Sydney

Australia welcomed Ovation of the Seas back to Australia today as the cruise ship arrived in Sydney. It is the first time since 2019 that a Royal Caribbean International cruise ship is sailing from Australia.

In the past two years, the global pause in operations due to the pandemic and a cruise ship ban from the Australian government meant Australians had to miss out on one of the most exciting cruise ships worldwide.

Ovation of the Seas just completed a 19-day transpacific cruise from Honolulu, Hawaii, during which she visited French Polynesia, Tahiti, and New Zealand.

Her first cruise from Australian soil will be an 11-night New Zealand cruise, sailing from Sydney to  Fjordland National Park, Dunedin, Christchurch, Wellington, Napier, and Picton, New Zealand, arriving back in Sydney on November 9.

Gavin Smith, the vice president of Royal Caribbean International in Australia and New Zealand, said Ovation’s sixth season from Sydney is a testament to the demand from Australians looking to have the ultimate summer holiday:

“This is an incredibly exciting time for Royal Caribbean in Australia, with Ovation’s return to Sydney and Quantum of the Seas’ arrival in Brisbane on Tuesday, Nov. 1.

It is fantastic to see Ovation in Sydney Harbour once again, and today is also an important milestone to thank our suppliers, the travel industry, and our loyal guests for the unwavering support they have demonstrated over the last two years.

We are very much looking forward to welcoming back our returning guests and new holidaymakers for a much-needed summer season of adventure and lifelong memories.”

Ovation of the Seas from Sydney

Guests will have the chance to enjoy everything Ovation of the Seas has to offer through the beginning of April 2023. The cruise ship will sail 21 voyages from Sydney, ranging in length between two and 12 nights.

After her first voyage to New Zealand, there will be a seven-night Country and Western charter cruise, followed by a 10-night South Pacific cruise to Vila, Vanuatu, Mystery Island, Vanuatu, and Noumea, New Caledonia. Other cruises will explore the Australian coastline, and Royal Caribbean will also offer several 2-night taster cruises.

On Ovation of the Seas, guests can find everything they want from a cruise. From exciting activities such as the Flow Rider surf simulator and the Northstar observation capsule to a ripcord experience where guests fly over the open decks.

There are more than 20 restaurants, bars, and lounges, including Jamie Oliver’s Jamie’s Italian and state-of-the-art entertainment. In April, the 4,162-passenger, 167,800 gross tons Ovation of the Seas will return to the United States, where she will spend the summer sailing in Alaska.

From November 1, one more Royal Caribbean International cruise ship will arrive in Australia. Quantum of the Seas will be cruising from Brisbane, Queensland. The itineraries will be two to 12 nights in length and will visit Australia, New Zealand, and the islands of the South Pacific.