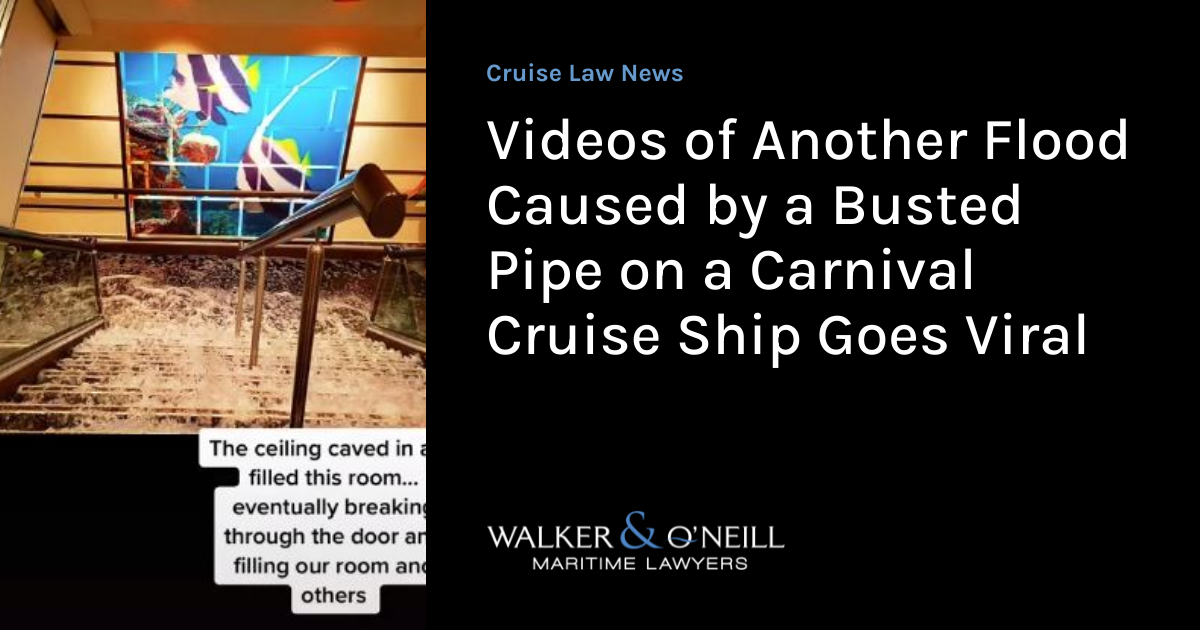 A massive flood aboard a Carnival cruise ship captured on videos recently posted on TicTok became viral sensations today. The two videos posted by adrienne_marie_1 of a flood which started in a passenger cabin on the Carnival Vista has been viewed over 14,000,000 times today. There is no date on the video but news accounts suggest that allegedly this was a “recent” cruise.

Disclaimer!! We are not trash talking the crusieline or the crew. Just documenting a scary experince that turned out funny. We did actually wake up to this flood and water past our ankles…so titanic vibes for about 5 minutes😳😅 #titanic #indoorflood #cruiselife #cruiseship #immersiveexperience #flood #vaca #funship #itscorn #forthemems

This is not the first time that a pipe has ruptured on a cruise ship. Four years ago, a broken pipe aboard the Carnival Dream flooded around 50 cabins on the ship. A video shows shows water dramatically cascading down deck 9. Photos (below right) and videos posted on Facebook show water pouring from the ceiling and down the walls. Carnival explained that the water line break involved “clean water from a fire suppression system.”

By all accounts, Carnival did the right thing in that flood. After crew members quickly dried the area and replaced the carpeting, Carnival offered a 100% reimburment to those affected, an additional 50% off a future cruise and the option to be flown home.

There is no indication how Carnival has handled this current, soggy mess.

Also around four years ago, the MSC Seaview suffered a flood down the main stairwell when a water line apparently broke on the ship (photo below left).

But some cruise lines have not been generous when passenger cabins flood during cruises.

A flood aboard Royal Caribean’s Serenade of the Seas back in January 2015 affected several hundred cabins, but the cruise line offfered only a partial cruise credit to the affected guests.

Probably the most egregious situation involved a flood due to a broken pipe aboard the Freedom of the Seas back in January of 2011. Royal Caribbean refused to refund any portion of the cruise fares of the inconvienced passengers – instead offering only a 50% discount on a future cruise. One story involved the couple’s first vacation after the husband returned from service in the Iraqi War.  You can see a video of the mess here.

Anyone know when this latest leak occurred and how Carnival handled this flood?

Please leave a a comment or question below, or join the discussion on our Facebookpage.

MSC Cruises’ Largest Ever Ship to be Named in Qatar

The Perfect Kit for Bouldering

The Perfect Kit for Bouldering