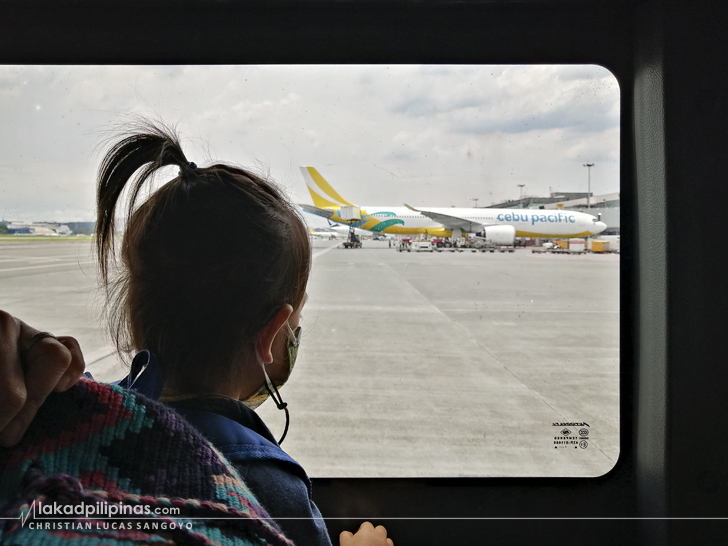 “Tatay, I thought we’re gonna ride an airplane? Why are we on a bus?” So went my two-year old son as we rode Cebu Pacific Air’s bus across the airport tarmac en route to our plane. It was A’s first time to ride one. And it was also his first time to really travel—being born just before the pandemic hit.

This trip has been months in the making. My wife has been wanting to go and have a trip somewhere, anywhere, just to get out of the house—cabin fever has definitely struck. But I was quite hesitant, since our son has yet to be vaccinated against Covid19. So, when virus cases finally leveled down, we quickly booked our flights and hotels, and packed our bags. We’re finally going.

►CHECK FOR AFFORDABLE HOTELS IN BORACAY

The break timed with C’s teaching vacation, lucky. While this isn’t gonna be like our usual epic two-month summer backpacking trips, we tried to make it epic in scale—relative to our son. We’re spending twenty two days in paradise. That said paradise, Boracay Island.

It’s more than two years since we last stepped inside an airport, but for our son A, it’s a lifetime. We actually checked in the night before to minimize close contact with airline personnel and fellow passengers.

There wasn’t much queue at Cebu Pacific Air’s counters, due probably to their easy three-step procedure for those who have checked in online—queue at the line, self check-in at the kiosks provided for your boarding passes and baggage tags, then drop your bags at the bag drop counters. Easy peasy, it didn’t take us five minutes to complete everything. And I also like the fact that there are automatic sanitizers right beside each check-in kiosks.

The only hitch we encountered was actually during our online check-in—the seats assigned to all three of us were scattered all over the plane. It took a minute for the courteous CebPac staff to sort everything out. We finally got seats right next to each other.

We were at the NAIA Terminal III early so before going to the boarding gates, we checked out the shops around and treated A to his first ever airport meal, Jollibee! We haven’t been dining out since forever, so this was also a treat for us, lol. Yum!

It didn’t take long before it was time to board the plane. And since we have a toddler with us, we were given boarding priority along with the PWD peeps.

Inside the plane, A buckled his seatbelts like he’s been doing it for the longest time (it was something he got from the shows he watched on TV) and quickly went for the Passenger Briefing Card. He thought it was a comic book, lol.

After tiring of it, we quickly brought out our distraction cards—one of his favorite Sesame Street books—and a few toys C specifically bought for this plane ride. This was our first time to fly with a toddler, we didn’t want him squirming and turning like a top throughout the whole flight.

I noticed the seats on our flight are thinner than usual and are non-reclinable. It turns out we’re riding one of the newer Airbus A321 planes from Cebu Pacific Air. This variant of the A320 seems to have a bit more legroom—due probably to the thinner seats, and it has a USB slot for charging your phones and gadgets. It definitely felt more comfortable—yes, even with the non-reclinable seats.

Our flight went without a hitch—although there were no inflight games, which we terribly miss, lol—and we were soon landing at the Godofredo P. Ramos Airport’s or simply Caticlan Airport’s tarmac.

We pre-booked our transfer from the airport to Ferra Hotel Garden Suites, our Boracay hotel, from Klook, so after getting our bags, we were quickly whisked to a van that drove to Tabon Port—this is the smaller ferry terminal at Caticlan used during Habagat season (instead of the bigger and much more efficient Caticlan Jetty Port) to avoid the waves brought by the southwest monsoon winds.

And then, total chaos. The Tabon Port Terminal was just too small to accommodate the queues made by the hotel and Covid19 verifications. It probably took us almost an hour—considering this is a weekday—to get our papers checked and we finally got sit on the ferry en route to Boracay Island.

And finally, finally, finally after some minutes across the narrow sea that separates Boracay from mainland Aklan, our sandals’ soles finally stepped foot on its fine white sand. A, we’re finally in Boracay!

Cruise Passenger Attacked, Killed By Shark While Snorkeling In the Bahamas

Cruise Passenger Attacked, Killed By Shark While Snorkeling In the Bahamas