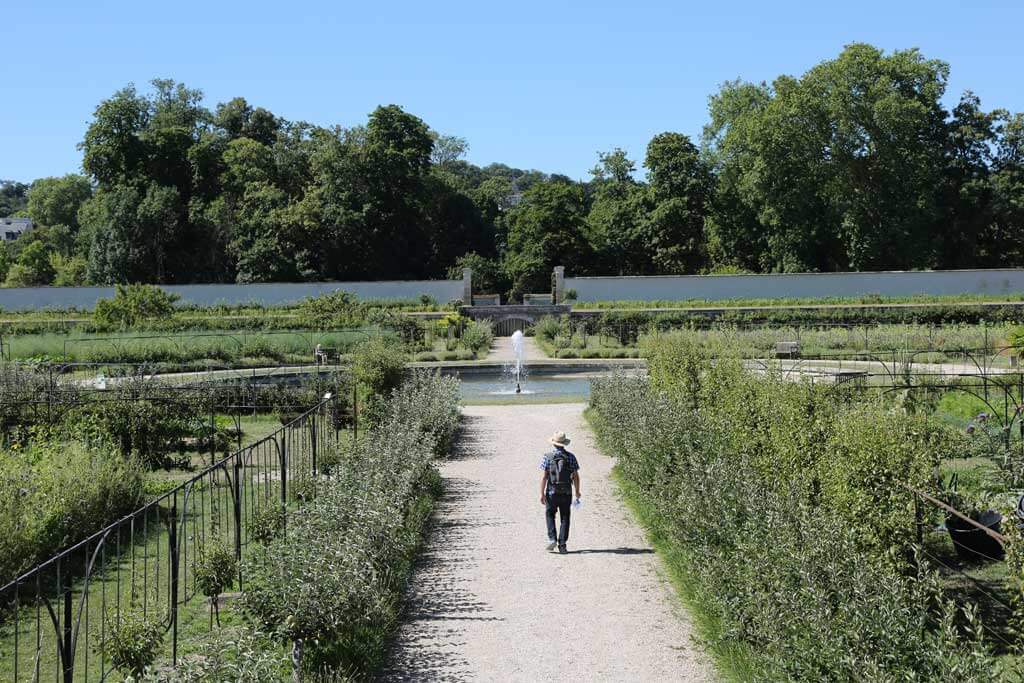 Located in the heart of the city, not far from the Château de Versailles, Le Potager du Roi (the King’s Kitchen Garden) is still a hidden gem in Versailles, unknown by the day tourists. Listed as a Historic Monument, Le Potager du Roi continues to produce the fruits and vegetables that made King Louis XIV’s table famous!

Don’t miss this exceptional site, one of the most prestigious gardens in France, where the gardeners perpetuate the art of pruning and they cultivate a wide variety of fruits and vegetables in a French-style garden. You can visit Le Potager du Roi on a self-guided visit or with a tour by one of the local guides (guided visit in French).

Le Potager du Roi was built between 1678 and 1683 by the gardener and botanist Jean-Baptiste de la Quintinie at the request of King Louis XIV. The main purpose of this garden was to supply the King’s table with fruits and vegetables.

The site chosen was not ideal for the establishment of a vegetable garden: a marsh nicknamed ‘stinking pond,’ not far from the Palace and the Swiss Pond. The King wanted it close to the Château so that he could visit it easily.

The construction works cost a million liards and required five years and the work of thousands of men to drain the pre-existing swamp and fill the ground with good quality soil from the plains of Satory. This also explains the use of an underground aqueduct, rubble drains, and raised beds. Significant masonry work, for the construction of terraces and high walls, was carried out by the architect of the Château, Jules Hardouin-Mansart.

The creator and sponsor of the Potager du Roi were inseparable and their influence in the fields of horticulture and gastronomy was major.

Indeed, until then, vegetables were considered food for poor people. They were growing at the level of the ground or, worse, below the ground, while fruits growing in height were closer to God. This still medieval thought was swept away by the taste of King Louis XIV and La Quintinie’s skills, who turned the production, harvest, and consumption of fruits and vegetables fashionable both in France and in Europe.

The King was not fond of apples, he considered apples a fruit for the poor. Instead, he loved the fruits with suggestive, female shapes like pears and peaches. The garden had an incredible variety of peaches, nectarines, and pears, often named with suggestive names.

A central Grand Carré devoted to the cultivation of vegetables. With an area of 3 hectares, the Grand Carré is divided into sixteen squares arranged around a large circular basin (used as a reserve for irrigation water) adorned with a central fountain. This area is surrounded by four raised terraces under which fruits and vegetables were sheltered in winter, including artichokes and cauliflower. Each of the sixteen squares is bordered by summer, autumn, or winter pear trees. The high walls of the terraces are covered with Muscat grapes.

Along the north terrace, eleven enclosed gardens (called “the Eleven”) sheltered vegetables, berries, and above all fruit trees, mainly pear trees, partly trellised in espaliers on the walls or in free form or led in espaliers.

The first winters in Versailles were particularly harsh, hence the need for these walls to protect the fruits and vegetables from freezing. During the reign of King Louis XV, winter temperatures were milder so, in 1785, six walls were removed in the southern part, which was too humid and insufficiently ventilated. Then the “Eleven” became five enclosed gardens.

At the end of the 18th century, the east and west terraces were transformed into ramps to facilitate the movement of carts.

King Louis XIV loved all kinds of salads. The King seasoned them with tarragon, burnet, and basil, but he also liked them sprinkled with violets. Meat and fish were boiled or roasted. The dishes were seasoned with lots of spices: salt, pepper, curry, and other exotic flavors. Sweets and pastries were most welcome.

King Louis XIV loved peas that an ambassador would have brought him as a present one day. Asparagus, figs, and strawberries were also in fashion! He had them sent in baskets when he was out of Versailles. The Bon Chrétien pear was the fruit that the “Most Christian King” liked to offer to ambassadors.

Here’s what a Royal dinner looked like in Versailles under the Sun King:

First came appetizers, plenty of them, then four soups. Next came what was called “roasts,” usually poultry and fish. After, there were presented the entremets (dishes served between the roasts and the dessert), the salad, and the cheeses.

Finally, the King liked to be served a hard-boiled egg to finish his meal, before eating some sweets.

During the meal, the dishes were not served one after the other. They piled up on the table so that it was never empty. In the center of the table, there was the “surtout,” a kind of basket that was permanently filled with small snacks and delicacies to eat. The guests were picking snacks from the “surtout” throughout the duration of the dinner, in addition to the dishes that were presented to them.

Le Potager du Roi was designed as an intensive production garden for the King and his court. La Quintinie delivered regularly his production to the Palace of Versailles when the King was present and sent it to him in large suitable baskets when he was not in the Palace.

La Quintinie developed cultivation techniques that enabled him to offer Louis XIV’s favorite fruits and vegetables produced out of seasons, such as strawberries at the end of March, peas in April, cherries in May, figs in June, asparagus, and head lettuce in December.

To do this, he brought together dozens of different varieties to obtain the best possible fruits. The fruit trees were trained in fan-shaped espaliers along the walls, to take advantage of good exposure to the sun. He used fresh fertilizer from the royal stables. The land had been drained and it was supplied with water by pumping from the plains of Satory.

During the winter, the vegetables were brought under a bell or under a glass shelter to capture the sunlight while in the enclosed gardens, the construction of walls protected fruits and vegetables against frosts and preserved the heat of the sun. For Louis XIV’s favorite fruit, figs, La Quintinie built a Fuiguerie (fig house) on the model of the neighboring Orangerie, and the trees were put in boxes in a greenhouse.

“Heat, both in the earth and in the air, can only regularly come from the rays of the sun. I dare say, however, that I have been lucky enough to imitate it in a small way with regard to a few small fruits: I ripened them five and six weeks ahead of time, for example, strawberries at the end of March, early ones and peas in April, figs in June, asparagus and head lettuce in December, January, etc.”

extract from JB de La Quintinie in his Instruction for fruit and vegetable gardens, in 1690.

The extraordinary results obtained by La Quintinie made the reputation of Le Potager du Roi in Versailles. The King himself regularly visited the vegetable garden to chat with his friend and he learned how to prune fruit trees there.

Descending from the castle by the “Hundred steps” bordering the parterre of the Orangerie, the King arrived through the King’s Gate which you can still admire (this is the only original gate that survived the French Revolution). He then went up an alley punctuated with pear trees before discovering, from the terrace the Grand Carré where the gardeners were busy. King Louis XIV was so proud of his Kitchen Garden that he didn’t hesitate to show it to illustrious guests like the Doge of Venice or the Ambassador of Siam.

La Quintinie was ennobled by the King in 1687. His successors continued their research and developed innovations that allowed the cultivation of exotic plants brought back by international travelers.

A kitchen garden of rare elegance, the Potager du Roi is above all an incredible landscaping library, which aims, in particular, to preserve old-fashioned pruning practices with more than 60 different fruit shapes. With around 4,000 espaliered trees, Le Potager du Roi is the largest collection of trees in the world grown in ancient fruit form!

Today, 450 fruit varieties and 400 vegetable varieties are grown in the Potager du Roi, with 15 tons of fruit and 25 tons of vegetables produced each year.

Since 1991, the place also housed the Ecole Nationale Supérieure du Paysage, where students can practice with the recent and old vegetable species that are grown.

The plants in the Potager du Roi are grown the old-fashioned way. The gardeners and landscape students cultivate the plants by hand, and there’s no use of phytosanitary products. Gardeners also accept the presence of certain varieties of flies, bumblebees, fungi, bacteria, mammals, and plants depending on their usefulness. They don’t hesitate to remove insects by hand if they can harm the trees and plants.

Most of the harvest is sold in the shop at the entrance for the joy of the inhabitants of Versailles: fresh, in canned version, or in juice, as well as a selection of books on gardening and plants.

The Potager du Roi is open to the public from Tuesday to Sunday from 10 a.m. to 6 p.m., from the first weekend of April to the last weekend of October. Guided visits (in French) are run by one of the main gardeners and combine history and lots of interesting information about the fruits and plants grown there.

How and When – Colleen’s Paris