Where to See Baby Whales in Mexico 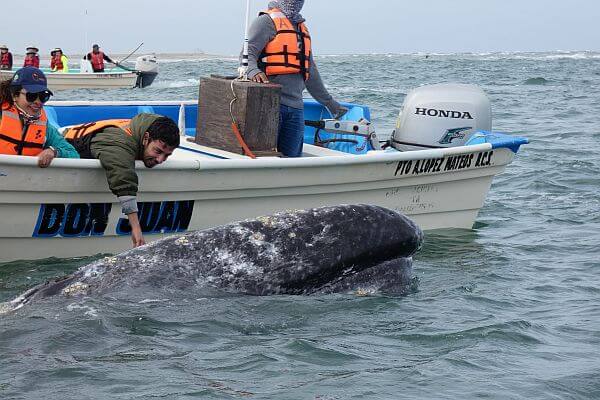 There are plenty of places to go whale watching in Mexico and in most areas of the Pacific Coast there are certain times of year where they’ll be drifting by. But the Baja Peninsula off the west coast of Mexico, south of San Diego, is whale heaven if you time it right. There are two bays there where gray whales come to give birth and nurse their young, so these are some of the best spots in the world to see baby whales up close. 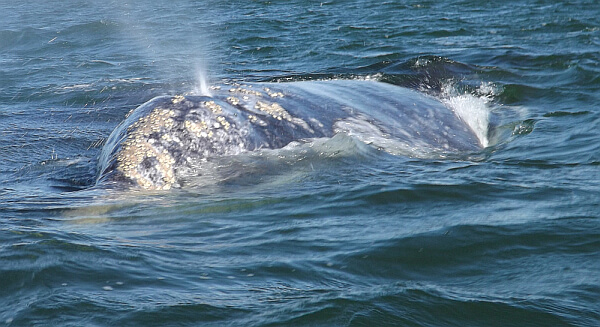 Baja Sur is the Mexican state with the most coastline and there are multiple bays and migration channels loved by whales of all kinds. You’re almost sure of seeing humpback whales around Los Cabos in January and February: I even saw some while teeing off at a golf course. You might even see water shooting up from a spouting blue whale blowhole around Loreto.

If you travel to two specific spots on the west side of Baja, however, you can get up close and personal with mothers and their cubs.

I didn’t quite believe this encounter was going to happen until I was actually out on the water and a baby whale poked its snout up right at the side of the boat. It used to be prohibited to touch them, but then the naturalists figured out that the little tykes actually like it. They enjoy being petted in the same way your cat does and apparently the mothers like sending the kids off to play.

So we’d see mama cruising around the boat after poking her head up to check out the scene. “Spyhopping” this is called and it’s a dramatic thing to witness. It’s not uncommon to see five or six mother/child combinations in the course of an hour and a half that the boats are allowed to visit. The mothers swim very close to the boats, or occasionally under them, coming up and spraying from their blowhole. The babies come right up to the boat and look at the passengers with their big eye. The director at the camp said they like to be rubbed around their lips. 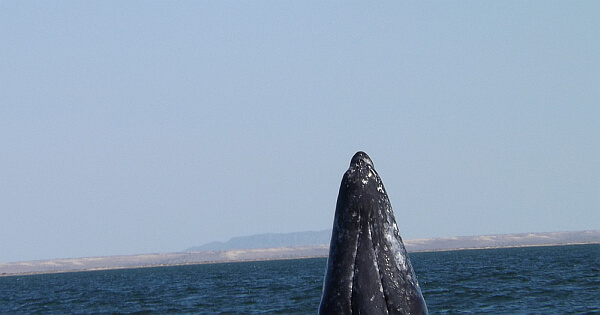 It’s not guaranteed this will happen of course. They might decide you don’t look like an ideal playmate. But there’s a pretty good chance of it happening and if nothing else you’ll see some whales in much closer proximity than usual.

San Ignacio Lagoon is essentially a big nursery. There’s mating going on, which you can see early in the season sometimes (be advised it’s kind of rough). Then there’s birth—just one cub per mother—and the males take off after the deed is done. In this protected bay the children can grow up and get strong. The area where the boats are allowed is the play area, but there’s a much larger area where boats are prohibited: the whales can go there anytime they want to have some peace and quiet. 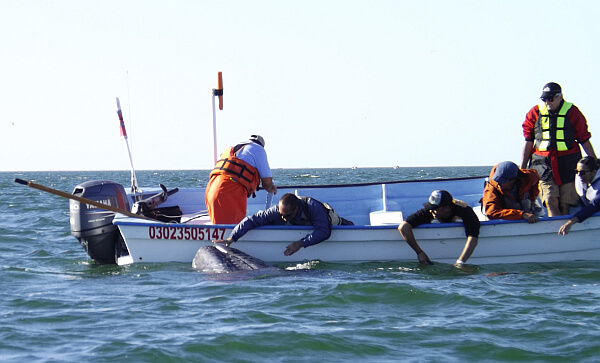 This well-managed protected area supports about 90 local Mexican families, many of them fisherman who have seen the light and become sustainable tourism types instead. Fishing stocks have been declining for decades and this way they’ve got more of a chance of recovering, plus it’s a steadier income for participants.

It’s a long haul to get to San Ignacio Lagoon as you travel several hours north from Loreto, to the oasis town of that name, then ride across some barren salt flats to get to the lagoon. This is a pristine, protected area right at sea level so you won’t find big resorts fouling up the ground and sea. Instead you stay in small huts or eco-friendly camps run by local communities, like the one I stayed with: Kuyima.

They have a few different options for sleeping. There are mattresses on cots in tents or you can rent a solar-powered cabin with a permanent bed. There’s a good restaurant with a bar powered by wind and solar.

The best way to work out this trip is to make it part of a multi-day adventure with an adventure tour company that runs trips in the region. They’ll mix in nature walks, visits to historic missions, and a stop by a famous cave painting spot over multiple days. See our past feature article on adventure travel in Baja for more.

The busiest times, when you’re sure to see plenty of whales, are from January through March. The insider advice though is to come in April. There are still plenty of whales who haven’t gone north yet, but the crowds have dwindled down considerably.

The second time I saw baby gray whales, it was more than just a one-day encounter. I stayed at a seasonal tented camp on a barrier island and went out multiple times on a boat to see the gray whale mothers and babies.

This was a trip organized by Sea Kayak Adventures, though be advised you’re not actually allowed to kayak around the whales. You’ll have to wait until you’re in Loreto, La Paz, or Espiritu Santo Island for that. What makes this adventure so special, however, is that you’re out on a motorboat before the day-tripper boats get there, plus sometimes you can see whales swimming by in the morning from the camp during breakfast. Here’s where you have your sundowner drink at the end of the day: 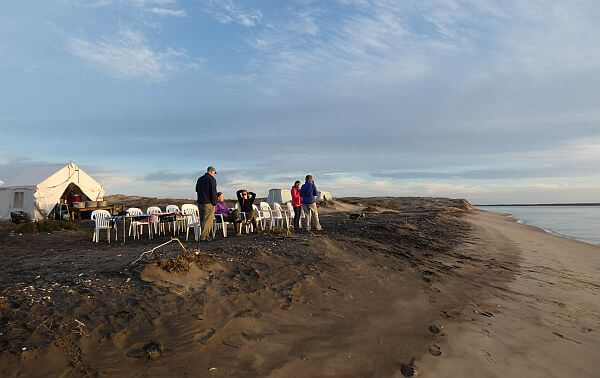 There was no shortage of whales when I visited Magdalena Bay in Baja, but the guides said the whales came out later that year, perhaps because of climate change, but nobody knew for sure. The tides and barrier islands are constantly moving as the winds push the sands around from year to year.

The babies were a little shyer in Magdalena Bay when I was there than they were in San Ignacio Lagoon, but it could have been the time of the year, rougher waters, or some other factor. I didn’t actually get to pat one on the head in my few days there, but we did see a few of them come up to other boats nearby. Even the babies are not exactly small though. They weigh a ton (literally) when they’re born and then can gain 60 pounds of weight per day. Within a week, they’ve got barnacles attached to their bodies.

You won’t always see a whale up close, but if you come during the prime part of the season, you’ll at least see some in the distance and your boat captain can usually pull closer when there’s a pod. Bring a good camera with a zoom though because the boats do have to maintain a safe distance and cut their motors when they get close. It can be hard to get good phone photos if you’re not right on top of them.

Gray whales aren’t all that photogenic anyway, plus they can sometimes be the same color as the water, so some patience is required to get a good photo. Sometimes it’s better to just kick back and enjoy the encounter than making 20 attempts to get the timing right for a baby whales photo.

If you don’t want to sleep in a tent and go #2 in a latrine, there are some basic hotels in Puerto Lopez Mateos town where the boats dock at night. Otherwise you can come to the whale sanctuary on a day trip from La Paz. That’s a long trip though, across the whole peninsula from the Sea of Cortez. It would take an entire day and then some, most of it in transit. 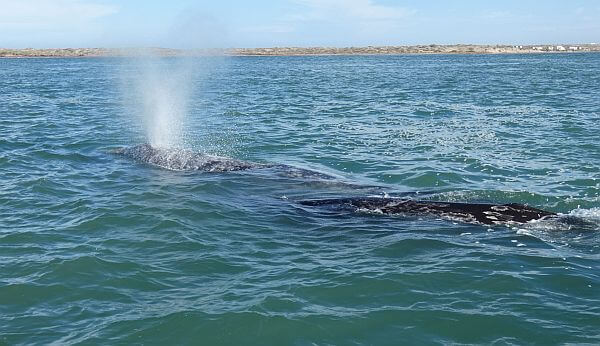 If you can rough it for a few days though, you sleep on cots with camp mattresses in the tents and there’s a big dome tent where you have meals, drinks, and nature presentations. We went on hikes among the dunes and took a boat trip to a mangrove area where there were lots of seabirds. It can get surprisingly chilly at night here though, despite being at sea level in Mexico, so bring ample layers and a jacket.

See an itinerary and prices here.

For more information, see the links above and also the Visit Baja Sur website.

The 10 Best Eye and Facial Masks for Jet-Setters