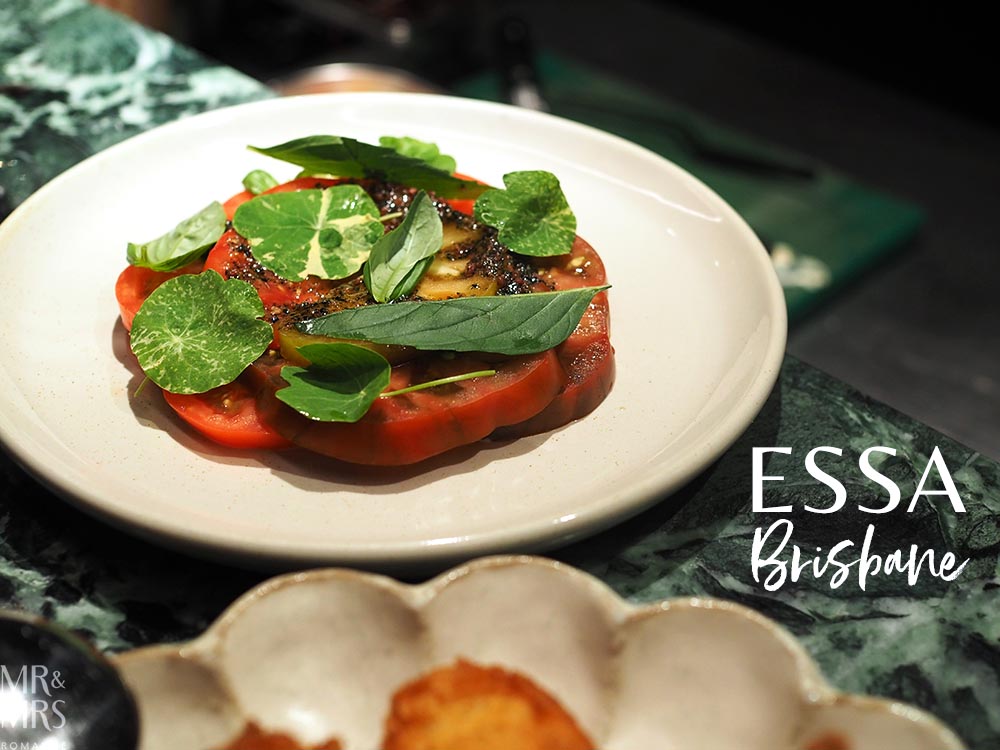 As Brisbane’s fine-dining scene expands and evolves like the rings of a pebble dropped into a still pool, the ripples of Essa’s focus on flavour, senses and style are making waves in the city’s gastronomic circles. 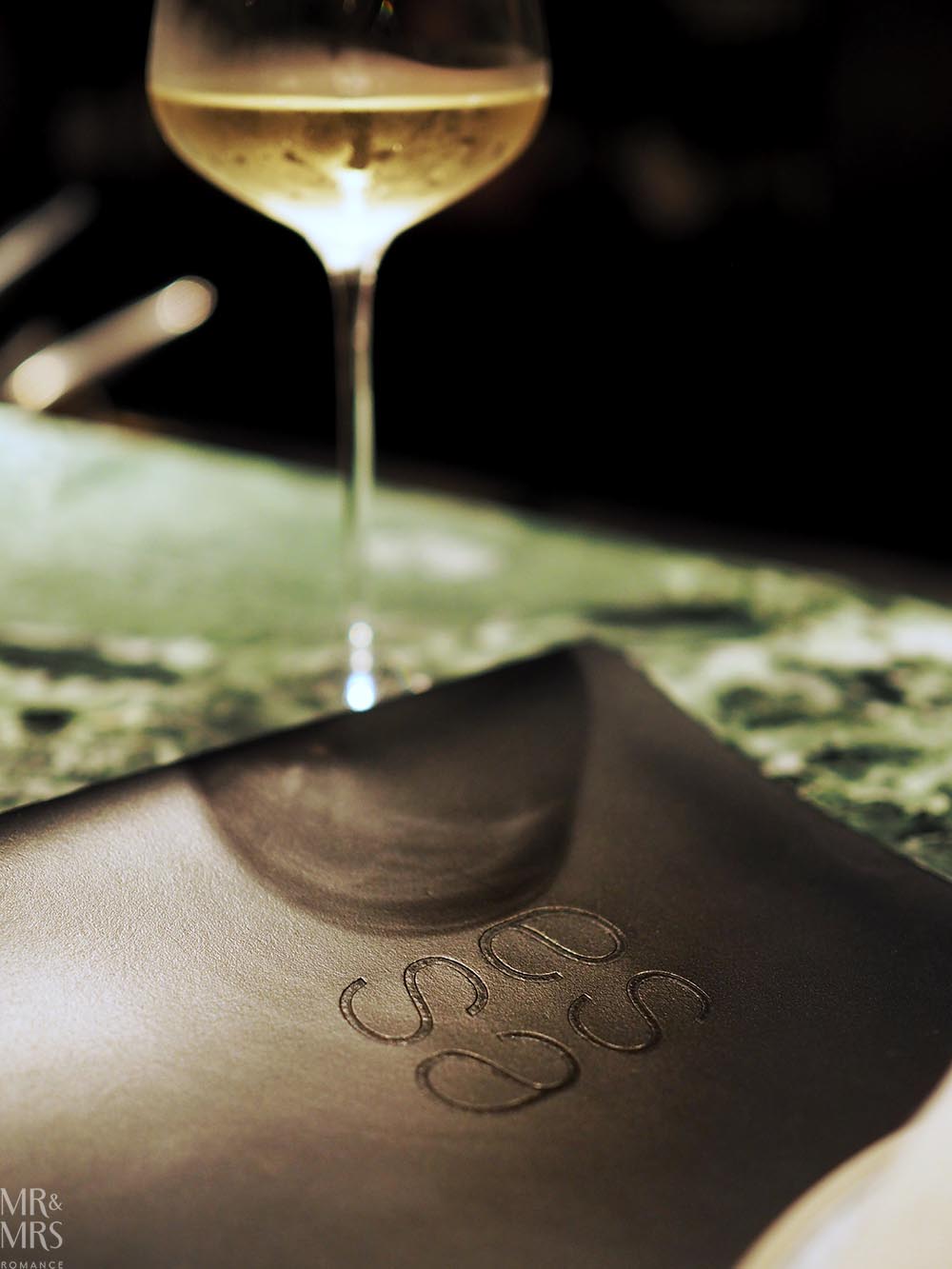 Just off the busy thoroughfare of popular James Street in the high-end side of the Valley, Essa hides behind its discreet doorway ready to tantalise, excite and satisfy.

Once inside, you’re greeted to a warm sanctum, heady with the aromas of exquisite dishes and the sounds of diners revelling in them.

White brick walls lead you down the somewhat narrow seating area, which gets narrower as you come to the robust yet elegant rich green marble bar. Under most circumstances, you’d expect the fingers of claustrophobia to begin to grope for you, but not here. 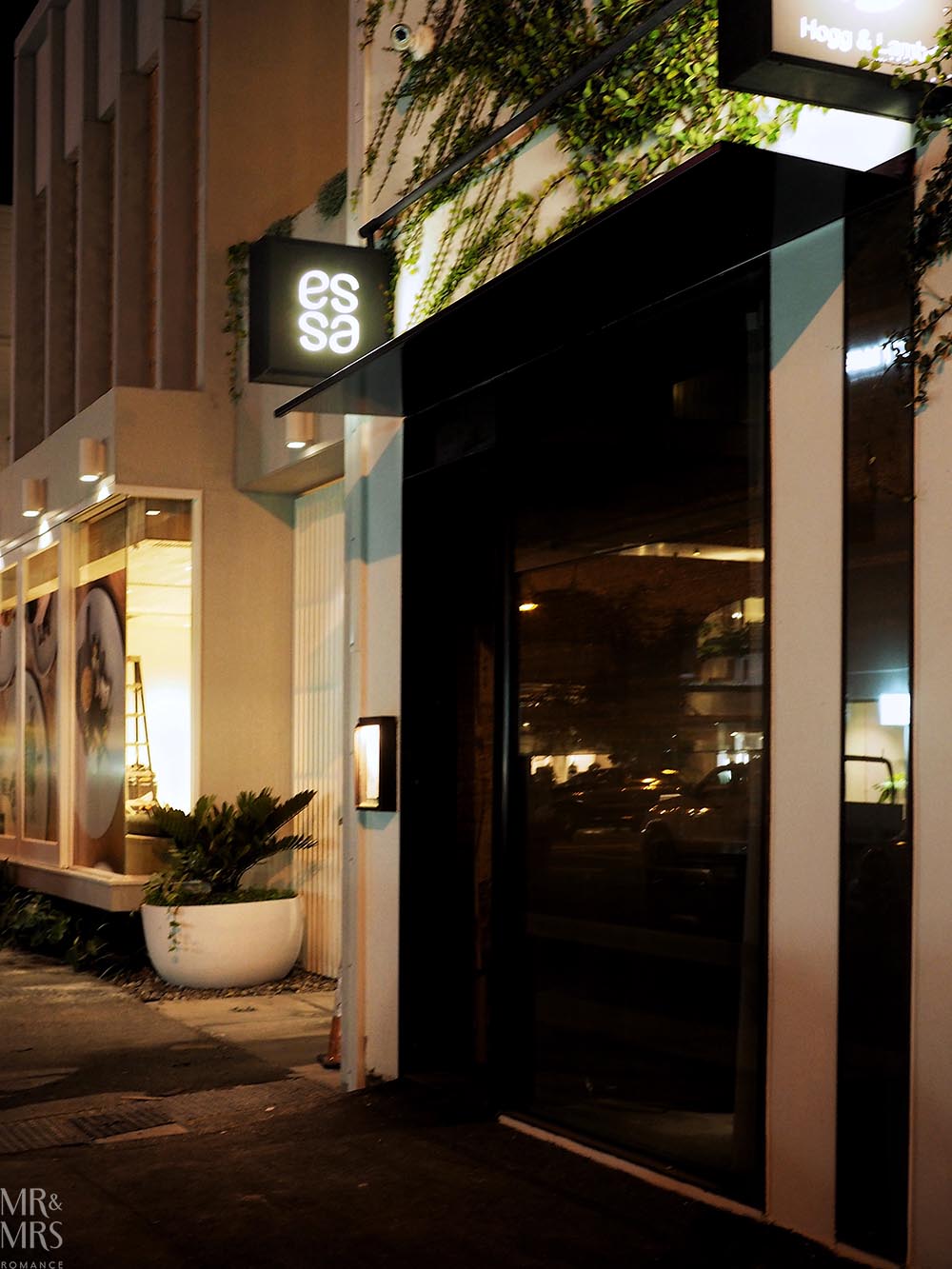 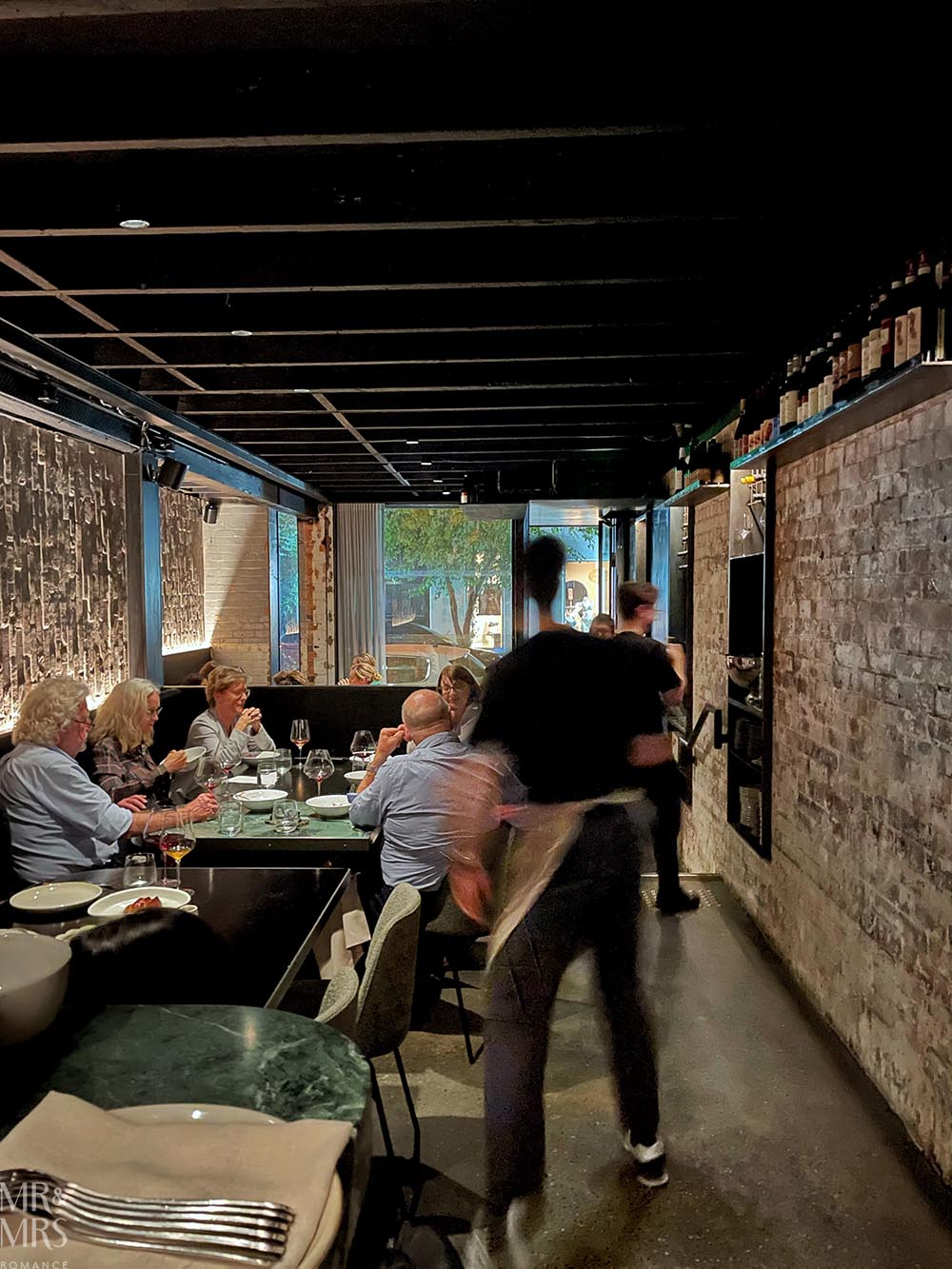 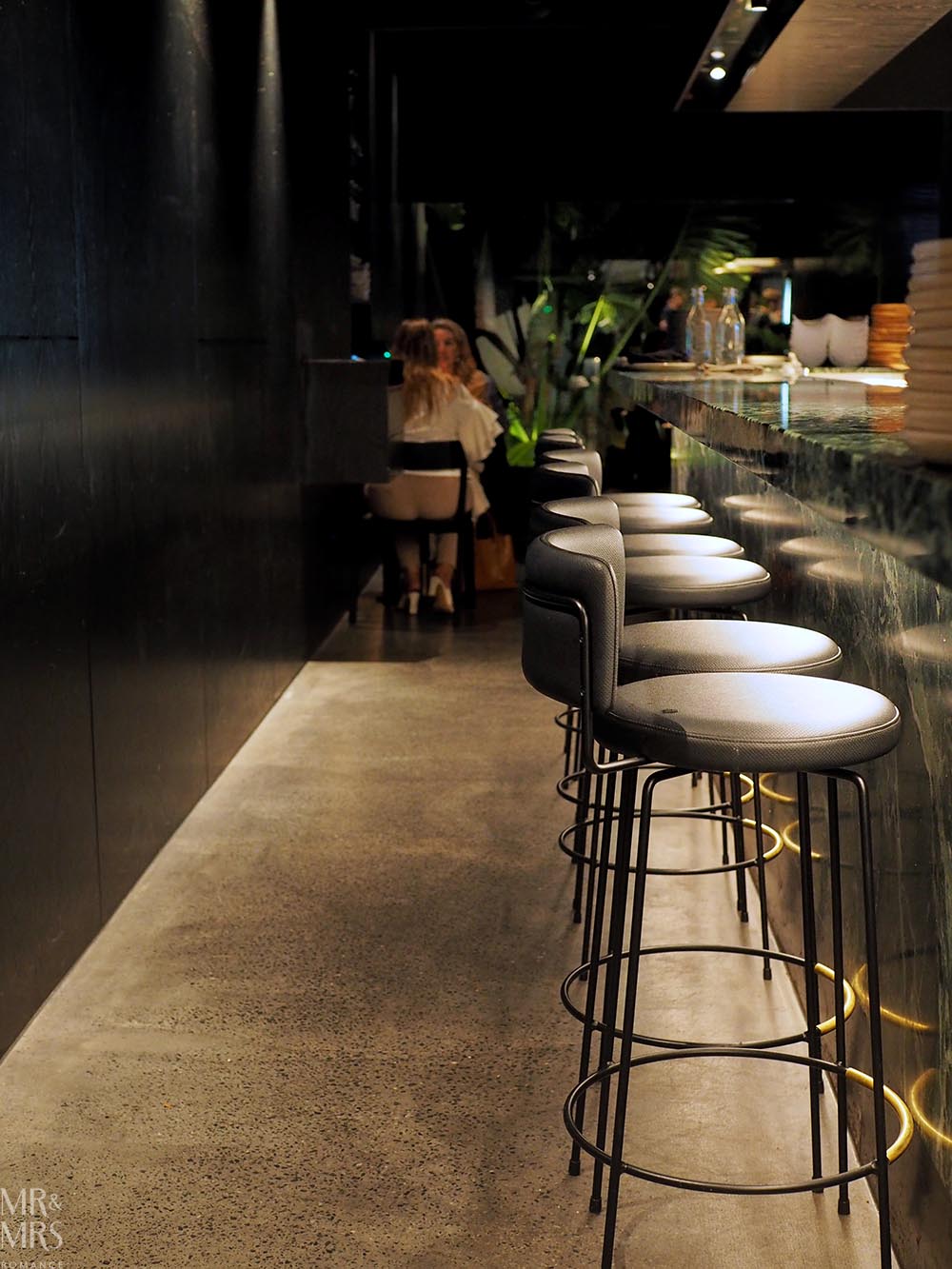 Clever lighting, the dark raftered ceiling and the general ambience creates an intimacy, a cosiness that many Brisbane venues miss out on for all their other attributes.

And as narrow Essa is, it goes back and back until it finishes at a little indoor garden on the far wall.

We’re seated in our favourite of all spots: up at the bar.

Being able to watch the creative cogs of a kitchen whirl and synchronise is fascinating.

It reminds us of our first visit to the vaunted Rockpool in Sydney, and to some extent the Ternary, where we were able to see the chefs in action. 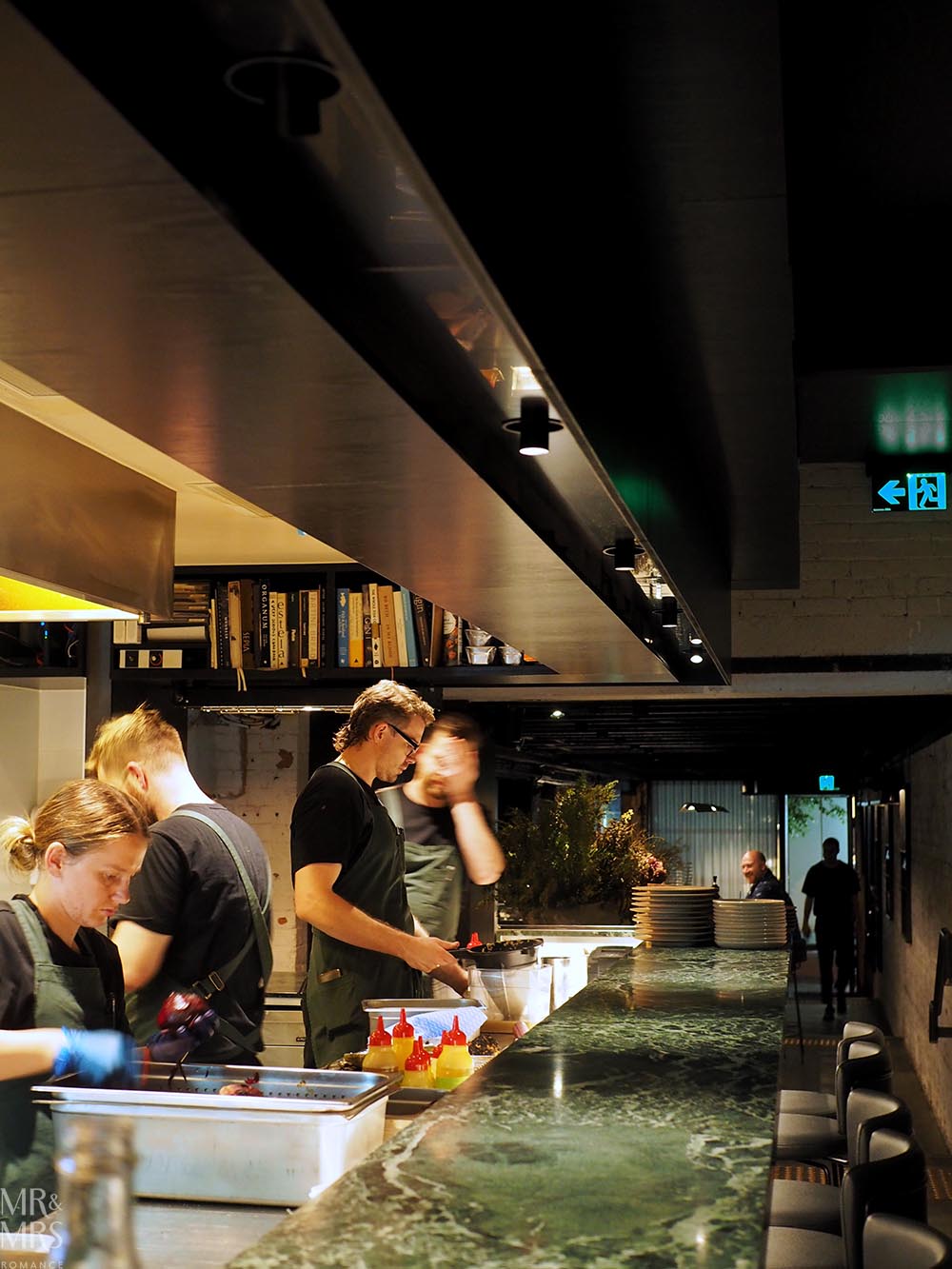 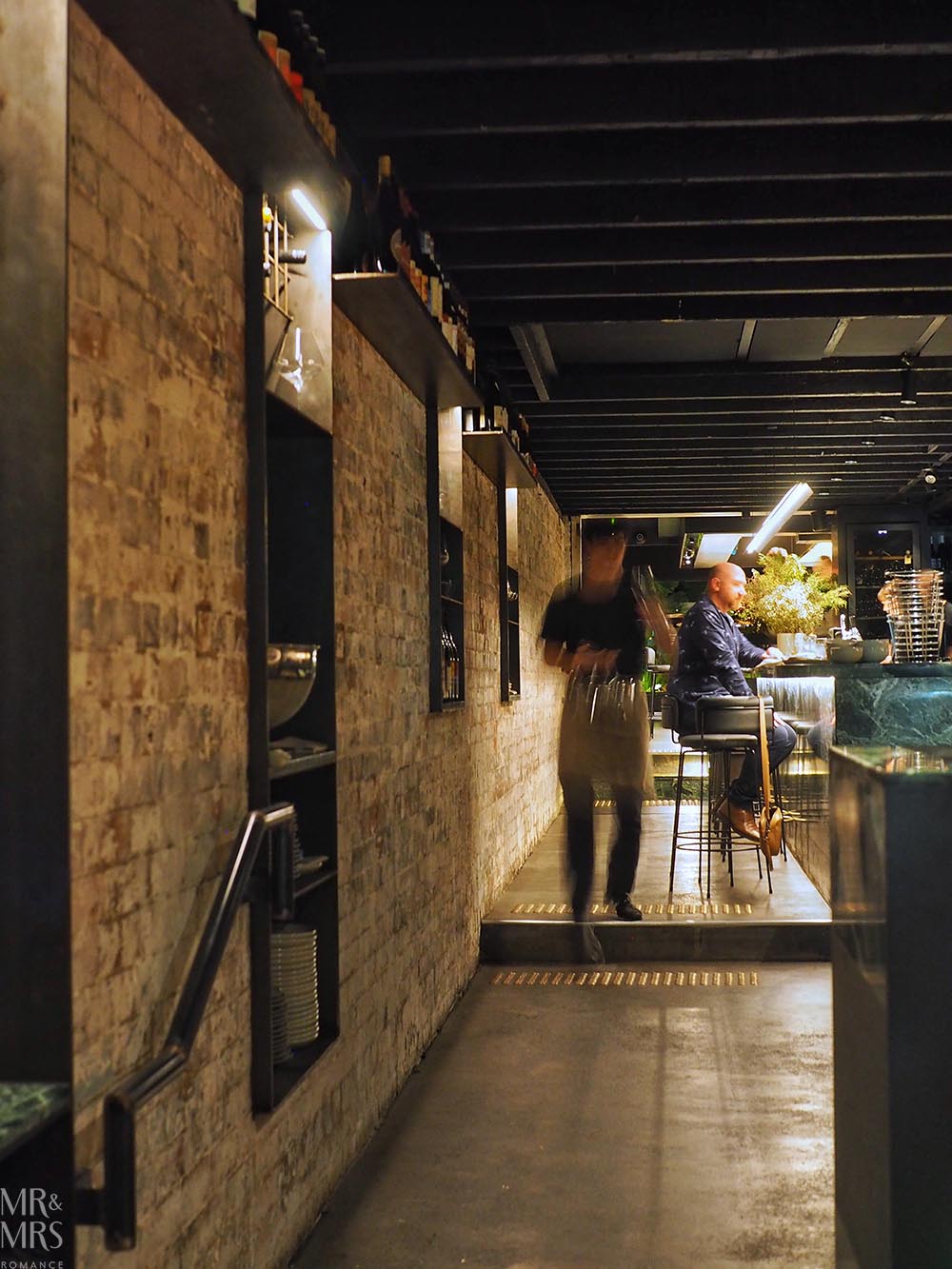 At first, we’re seated facing the grill chefs and their blazing charcoal fires. It’s very dramatic, but also very warm. So in spite of the literal conflagration lighting our place setting, we’re relieved to move down in front of the raw food station.

The line chef here, Lettie, is immediately friendly, and we chat when she’s not too busy and watch on in awe when she is.

She’s happy to answer our random questions about the food as it comes out, some of which she’s prepared and plated herself right in front of us. It’s like having a private chef! 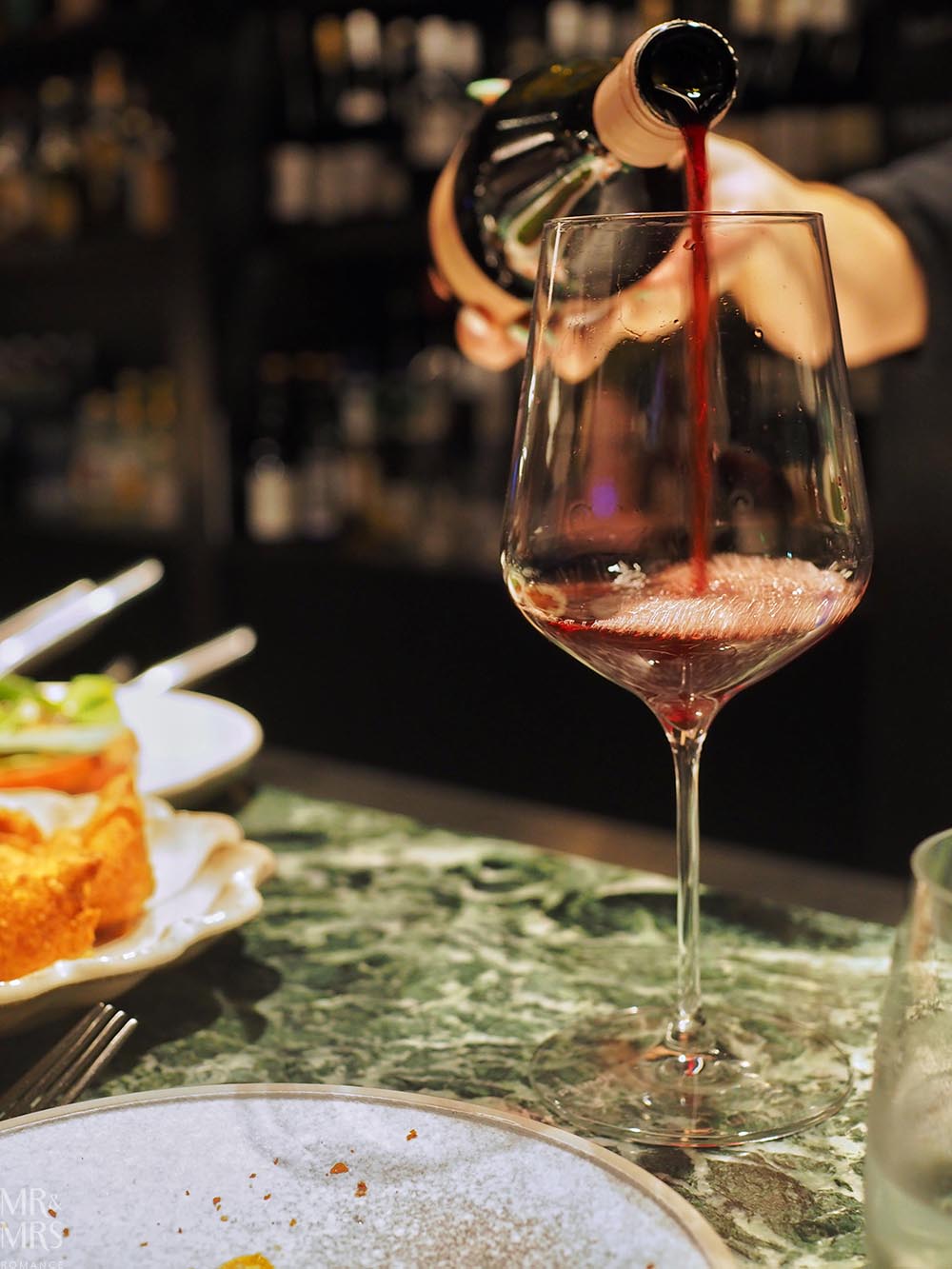 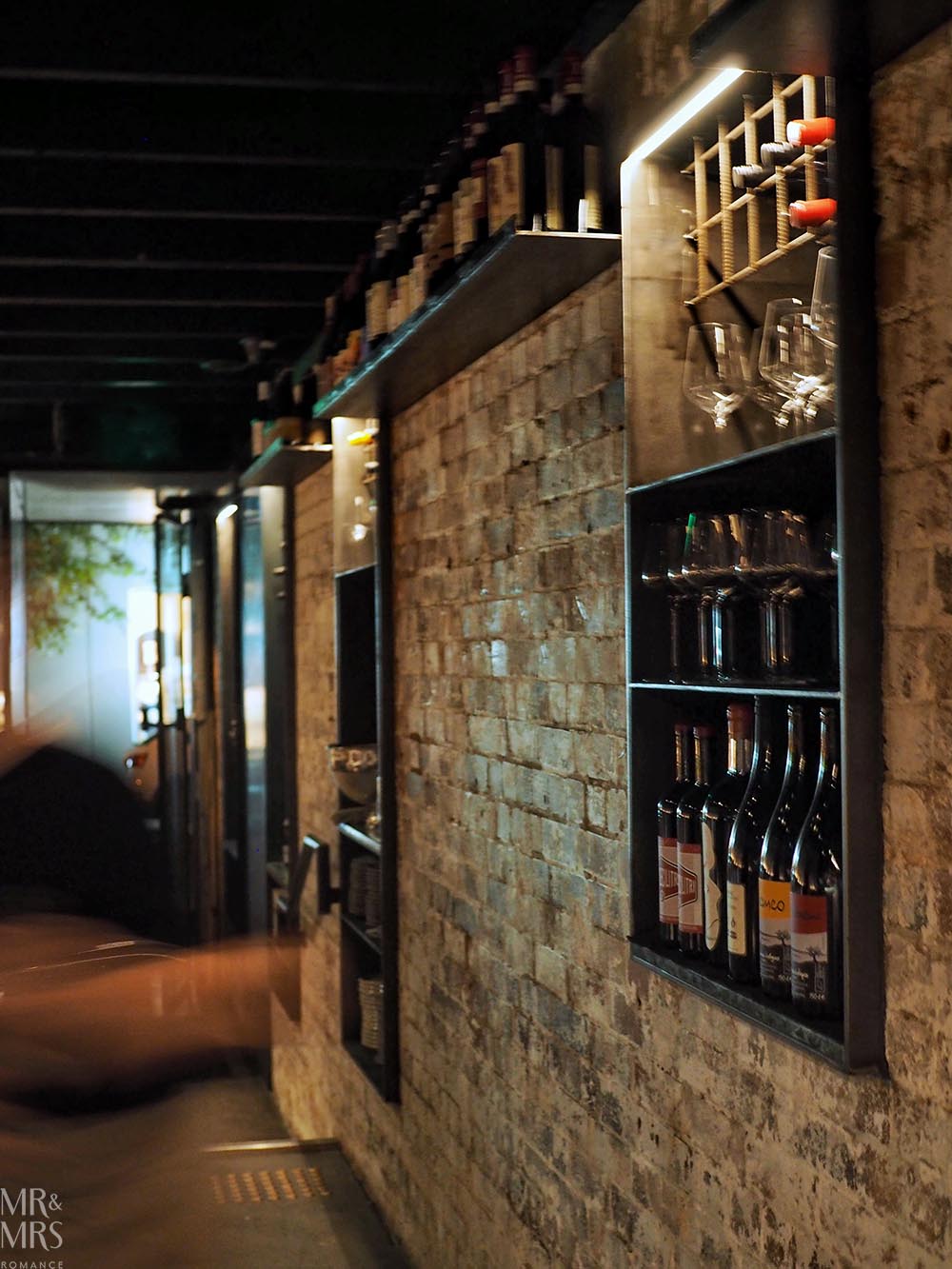 What to eat at Essa

The menus at Essa are always changing depending on what’s in season and availability, but two things remain the same.

Firstly, the quality. Thanks to excellent local produce, the remarkable skill of the chefs and the brain of owner and head chef Phil Marchant, the food here is exceptional. 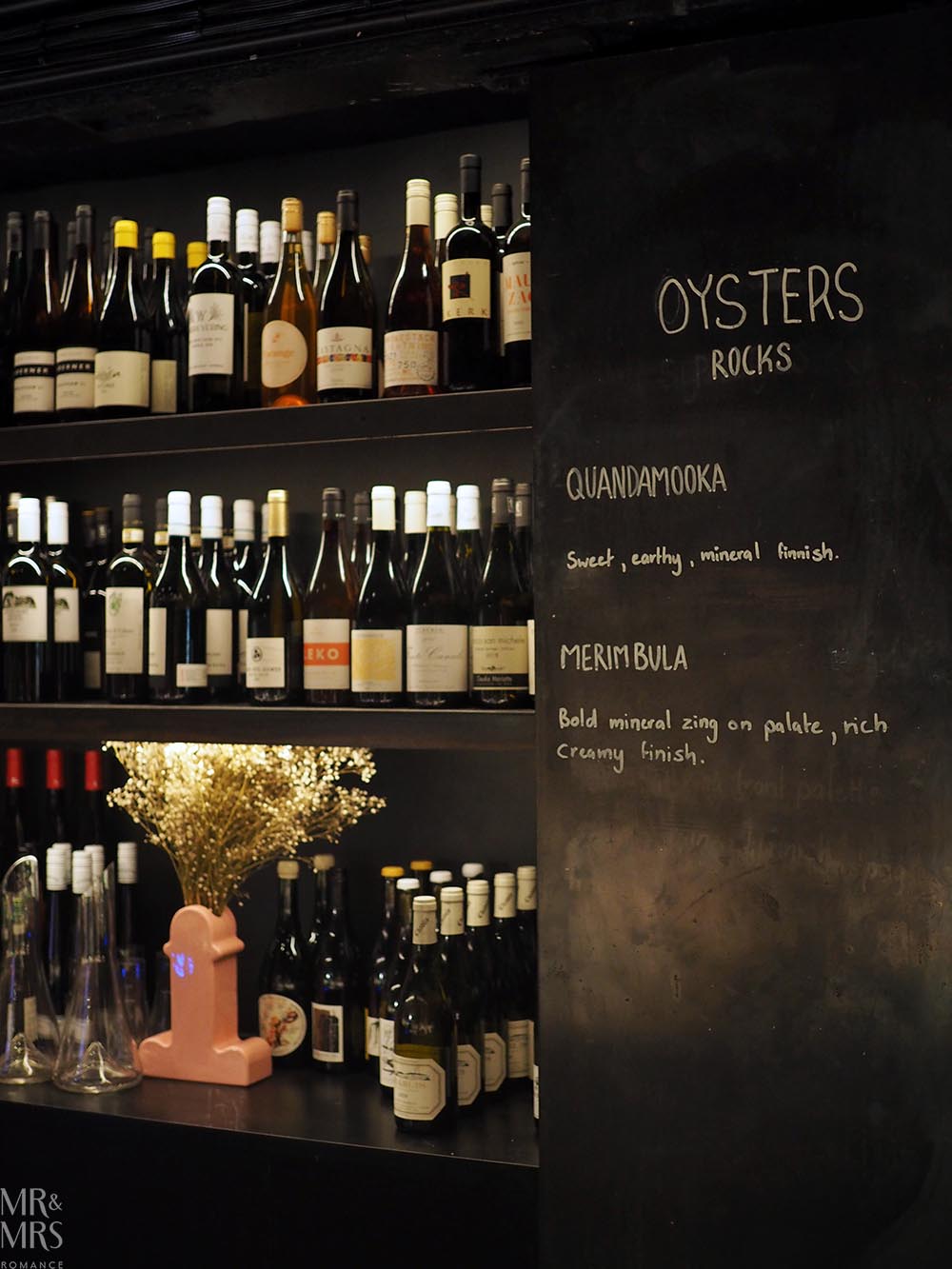 Secondly, there’s always the ‘Leave it to us’ option if you can’t make up your mind.

$94pp will spare up space in your brain that decisions always gobble and the kitchen will put together everything that’s good that night for you to enjoy.

We, of course, choose this option, and sit back and relax.

Full disclosure, we’re mugs for an up-sell and we can’t resist the offer of half a dozen appellation oysters.

Lettie, our talented new friend at the raw food station—and therefore in charge of oysters—explains there are two types of Sydney rock oyster here: Merimbula (creamy and rich) and Quandamooka (robust and savoury). 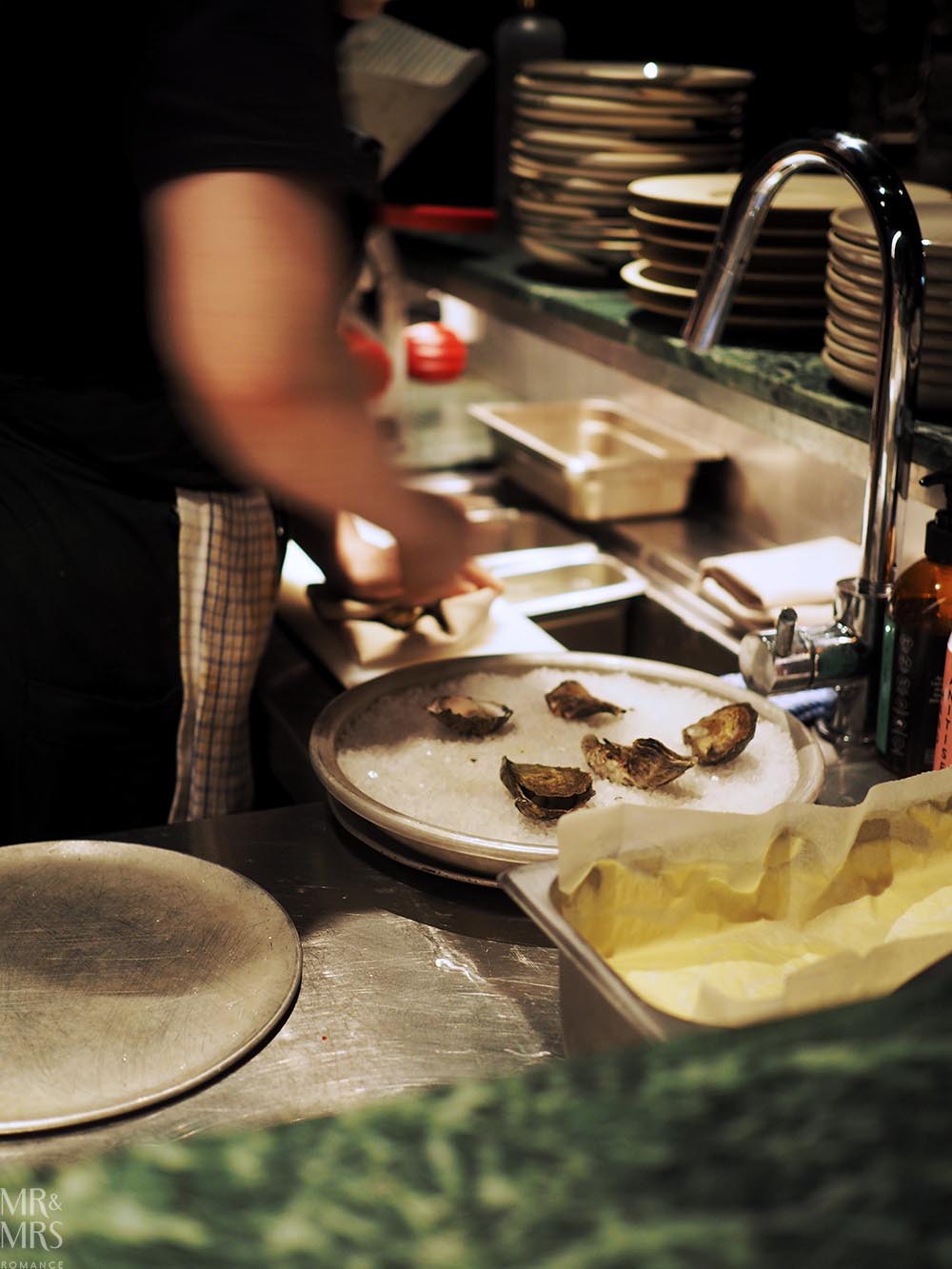 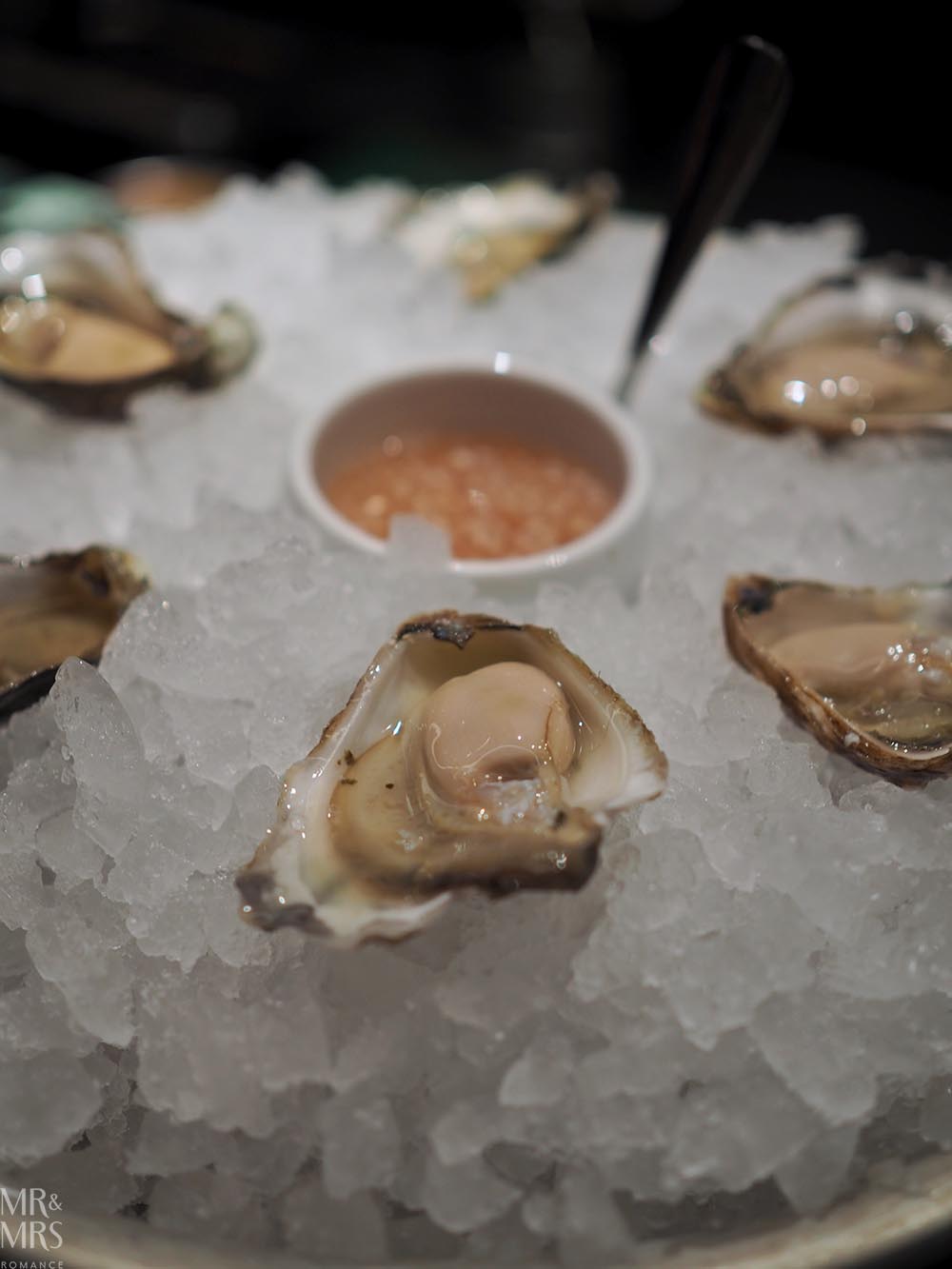 She promises to give us some of both, which she shucks in front of us. Conveniently, I prefer the Merimbula oysters and Christina leans towards the Quandamooka.

Leave it to us – what we ate at Essa

The ‘Leave it to us’ degustation menu includes a total seven dishes.

First up is sourdough and ‘nduja. This is also in Lettie’s remit. In fact it’s the one thing she has to actually cook and has a vat of the rich spiced oily mixture bubbling away next to her. 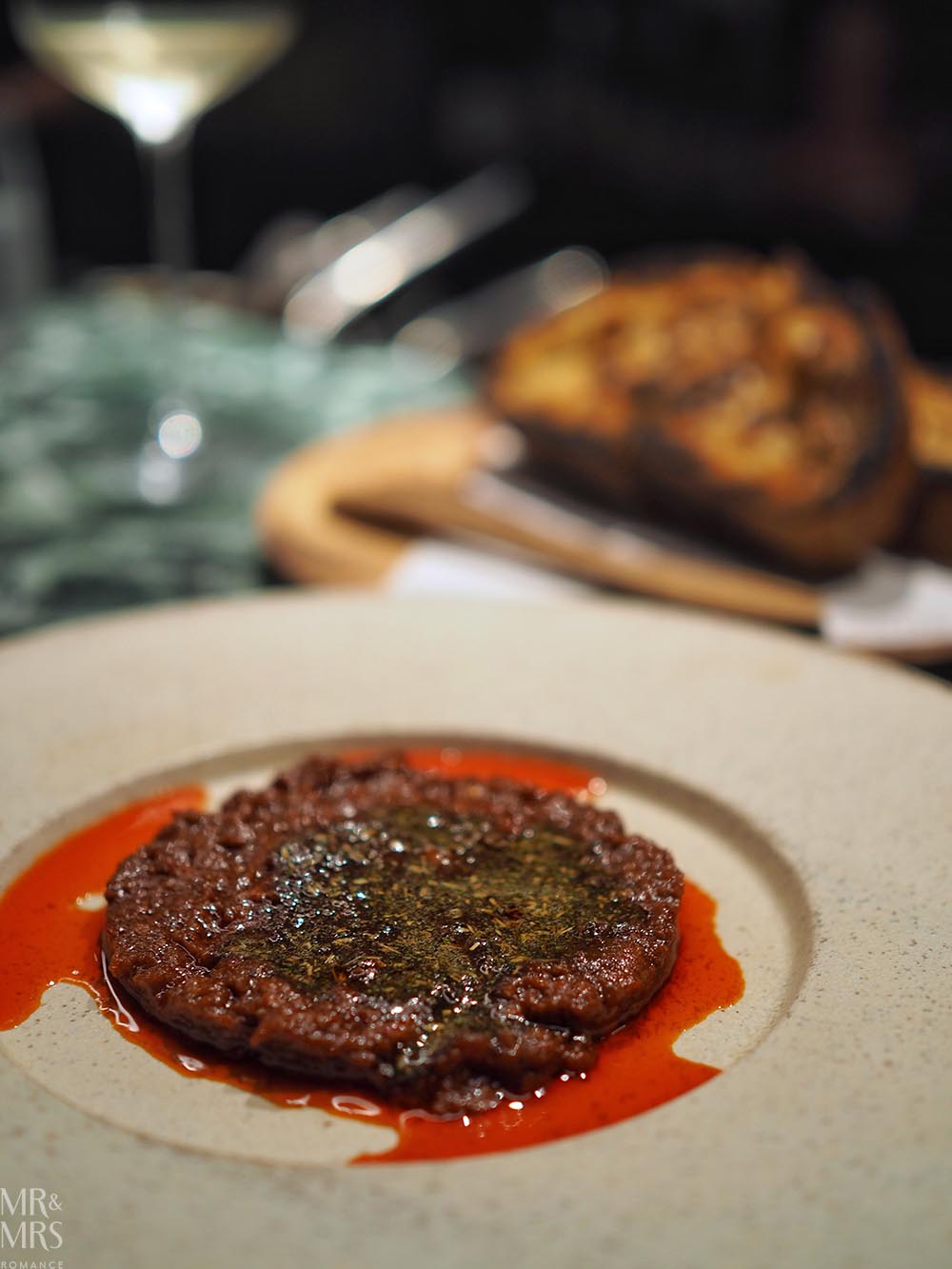 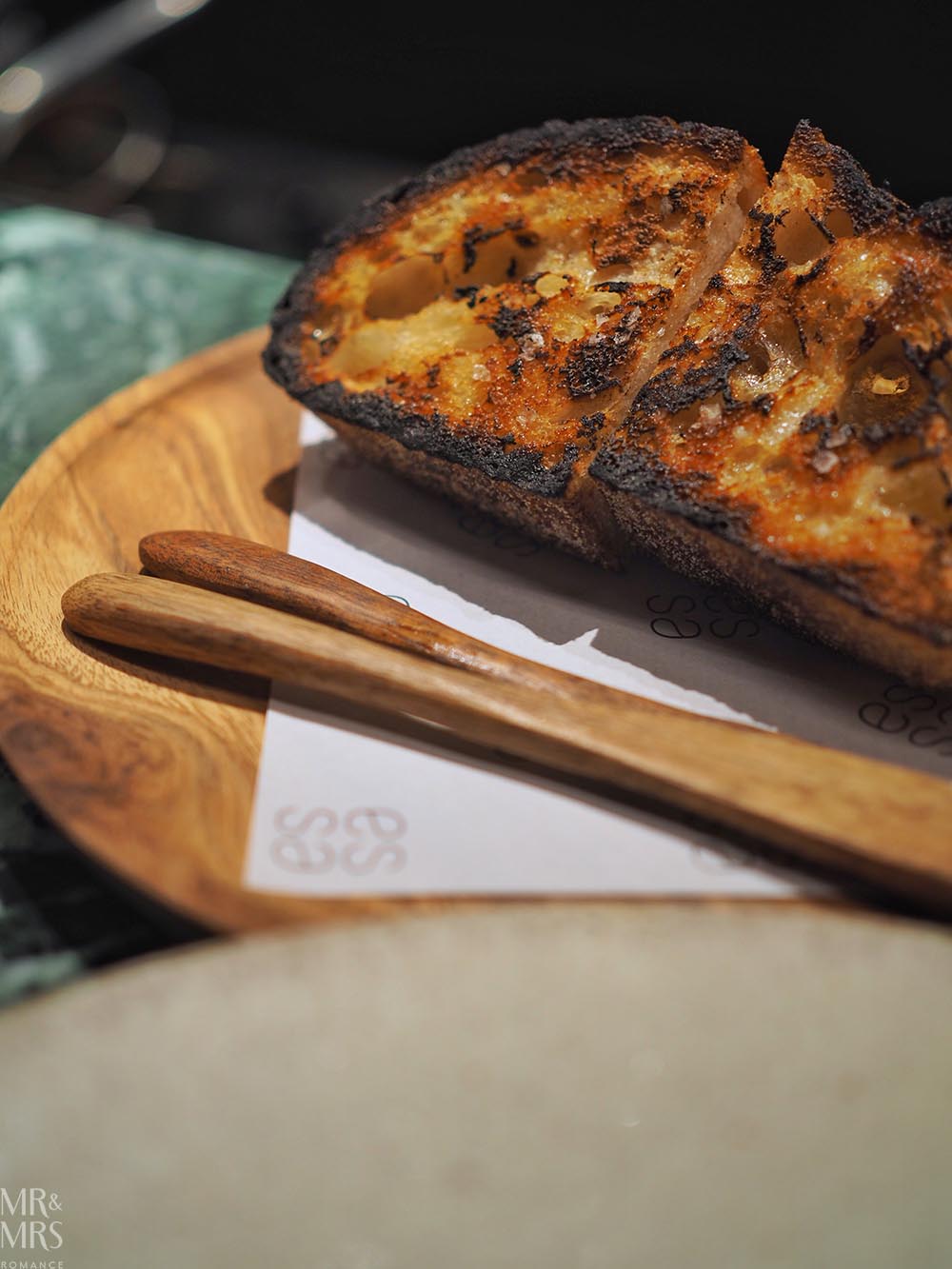 From Calabria in southern Italy, ‘nduja is a type of cured sausage meat that you can spread onto bread or crackers and is sometimes found in little blobs on pizza. But here at Essa, they serve it like a burger patty or beef tartare—a huge disc of delicious.

This is an unbelievable dish—an ‘umami bomb’ as Lettie describes it.

Chewy, crunchy black-charred sourdough from the charcoal station with the spicy unctuous rich ‘nduja spread thick on top, then a clever counterbalance of sweet honey drizzled on top of that. This is heaven.

Our next dish is marked simply as “fried chickpea beignets, caramelised scallop cream”, but this hardly does this dish justice. The beignets have a delightfully crisp outer coating that collapses under the slightest touch. Inside is a soft gooey centre that’s still tender and light. 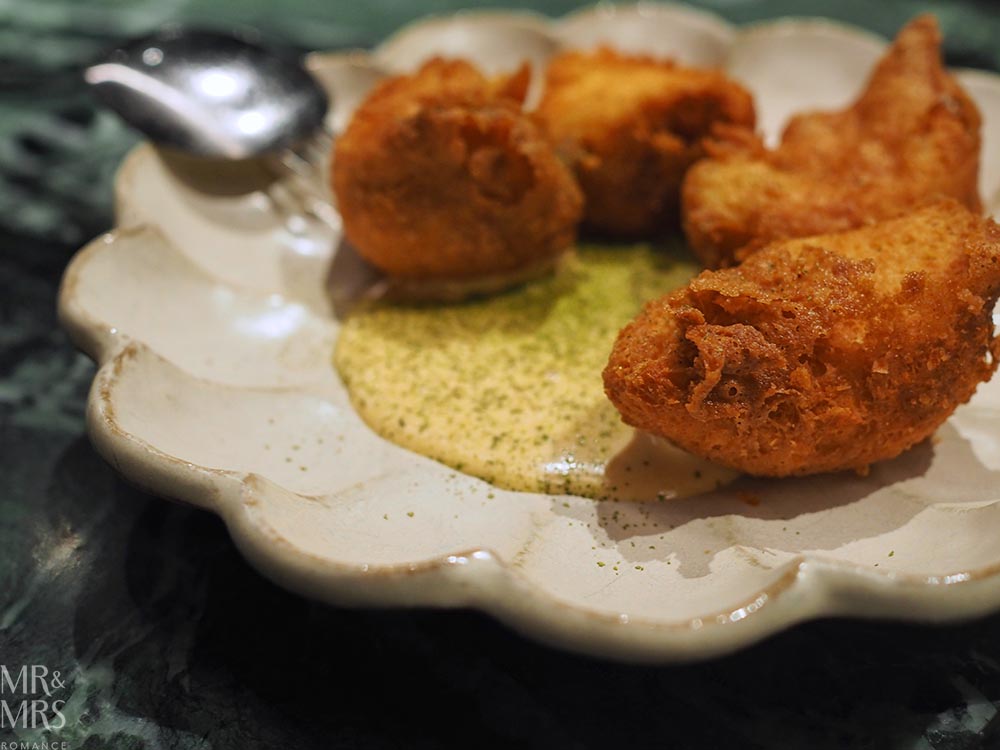 I have no idea how they stopped the chickpea mixture from being dense and cloying, which is can be, or how there’s so much flavour here. This dish really is spectacular.

Next is a kind of deconstructed bruschetta, thick slices of juicy tomato topped with basil and geranium leaves, topped with a ‘charcuterie XO’, which is a dressing made with crisp saucisson and balsamic. 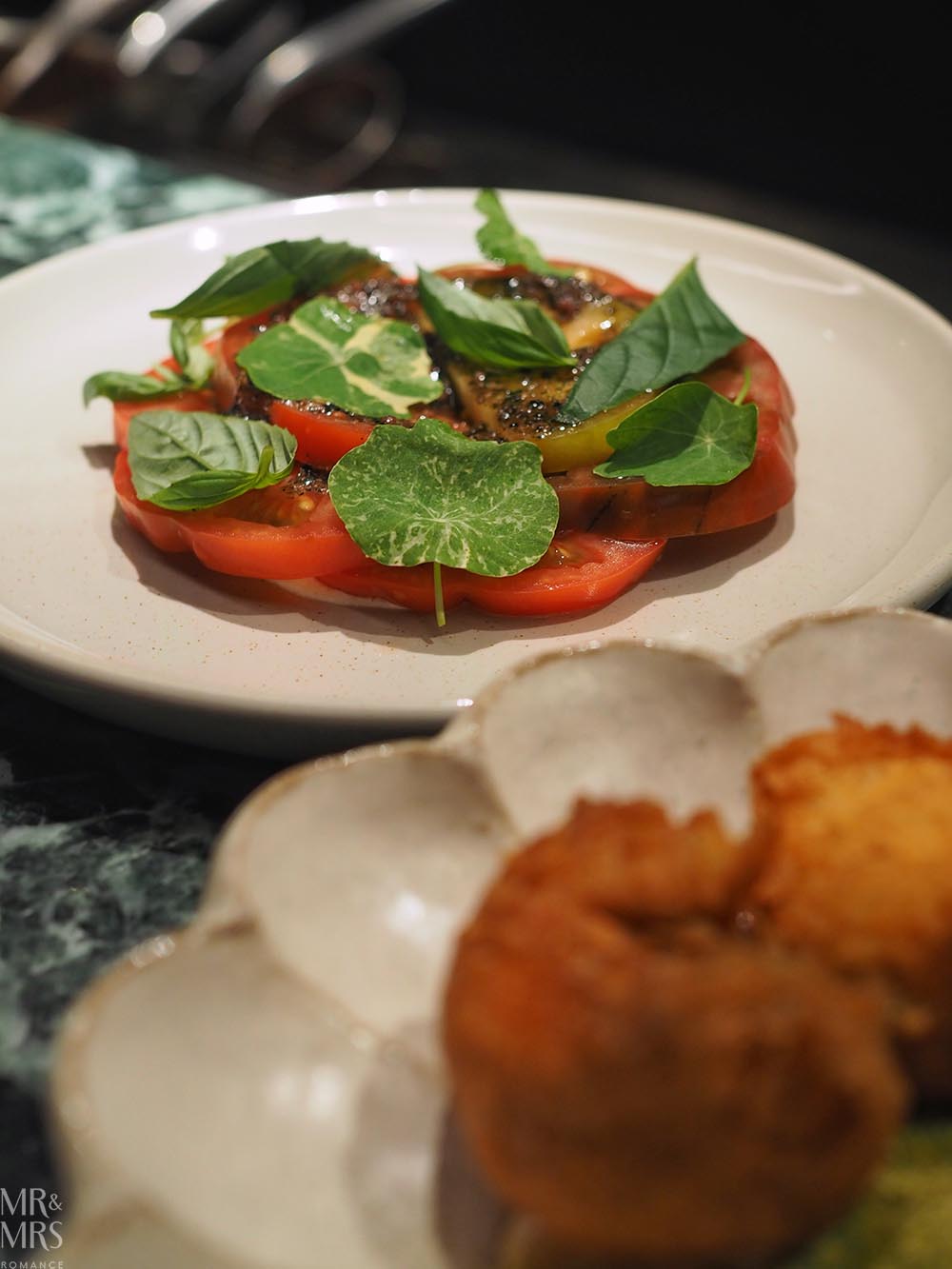 This is closely followed by enormous banana prawns that have been chargrilled in their shells then pealed so the meat is smoky and a little charred too.

The prawns served on a ‘fish-onnaise’ made with a swordfish bisque that’s been reduced down and emulsified in oil to a kind of mayonnaise. But this is way richer and creamier than any mayo.

We find ourselves eating almost all of our prawns, head and all. Because the shell was charred, most of the head is blackened as well. You’re left with a crunchy smoky umami that you start nibbling on. Before you know it, there’s not much left on your plate! 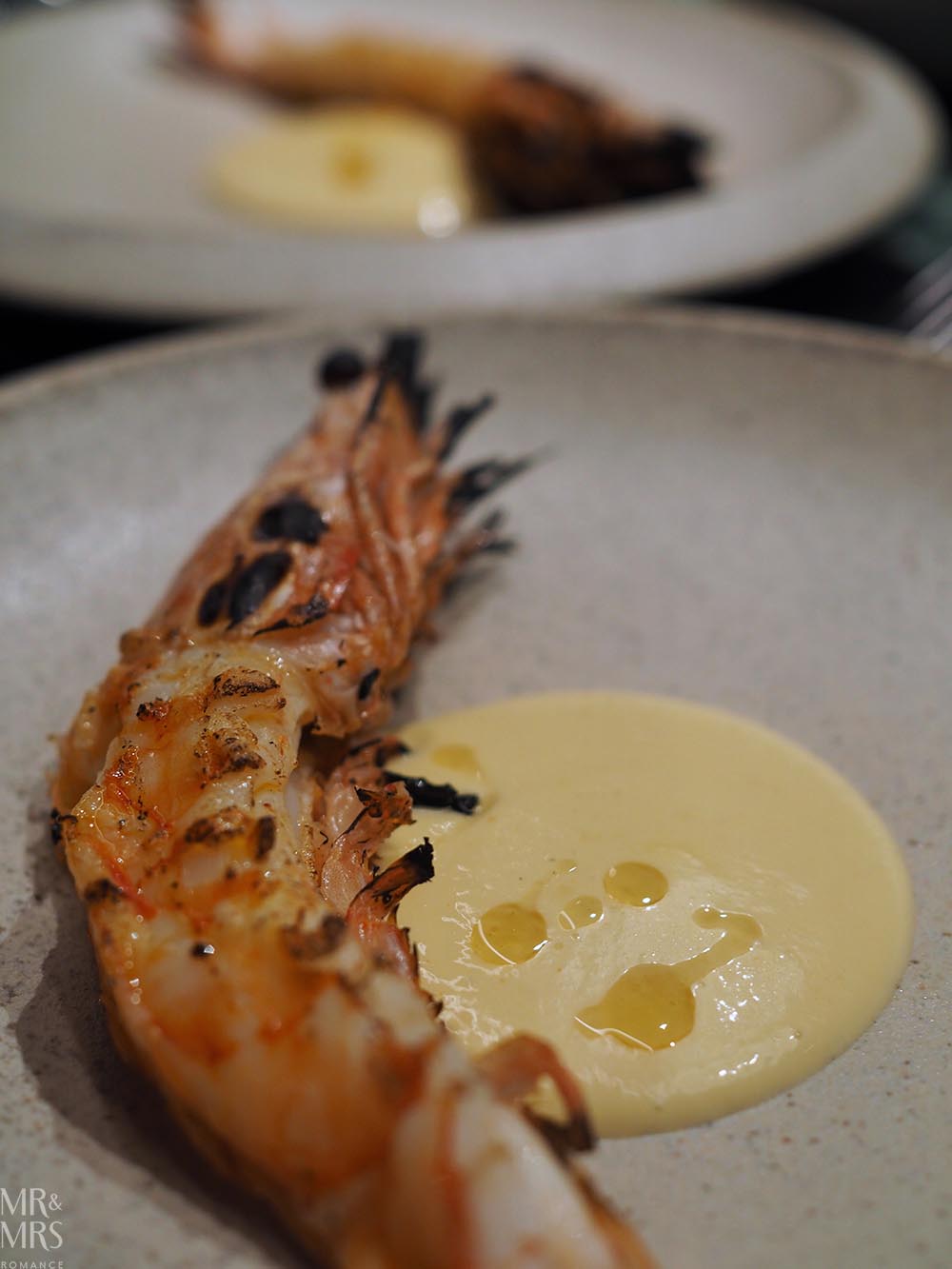 The last of the savoury dishes is the roasted duck leg on a bed of beluga lentils and a rich jus, served with a salad of raw witlof dressed with hazelnuts and an orange vinaigrette.

Surprisingly, this is the least impressive dish of the lot. There’s plenty of flavour, but not the umami tsunami of the others. Or perhaps we’re just really full now! 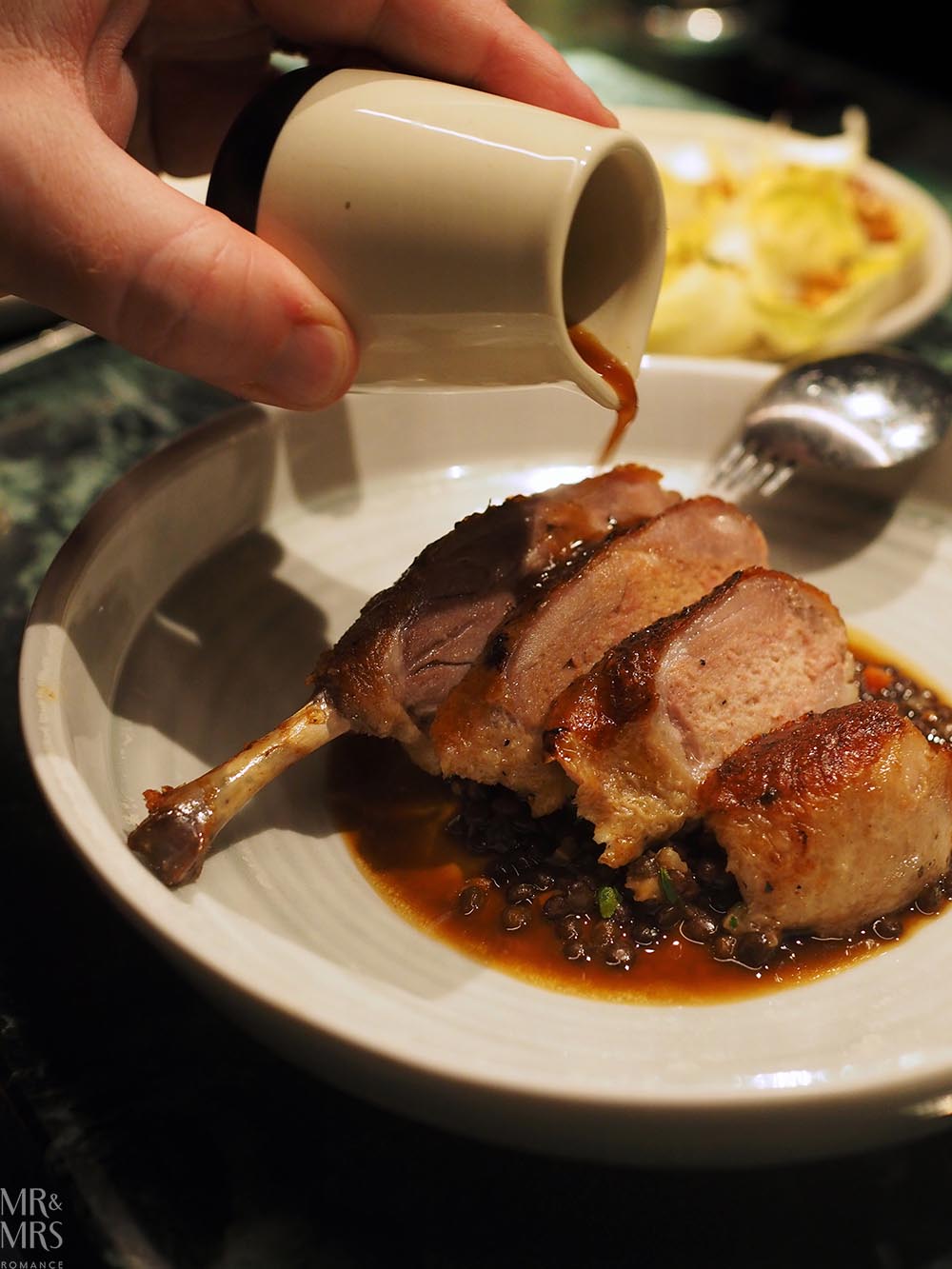 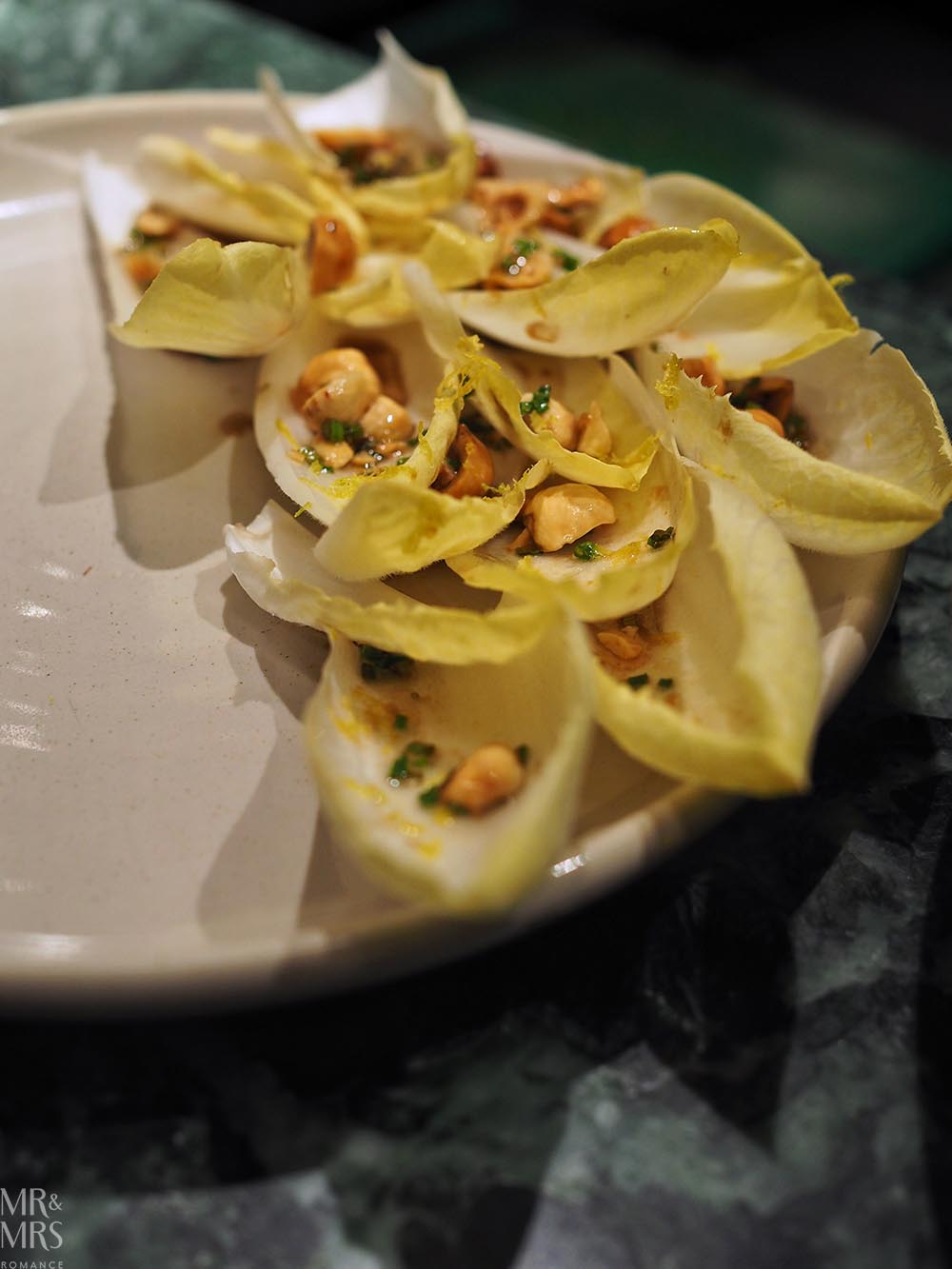 Finally, the dessert—roasted plum with coconut and almond sorbet, and dressed with crystallised sesame and burnt lemon myrtle ash.

The last two elements add a crunchy texture and a beautiful savoury note a well-balanced satisfying dessert. And being a sorbet, it cleanses the palate and doesn’t leave you feeling stodgy and over-full. 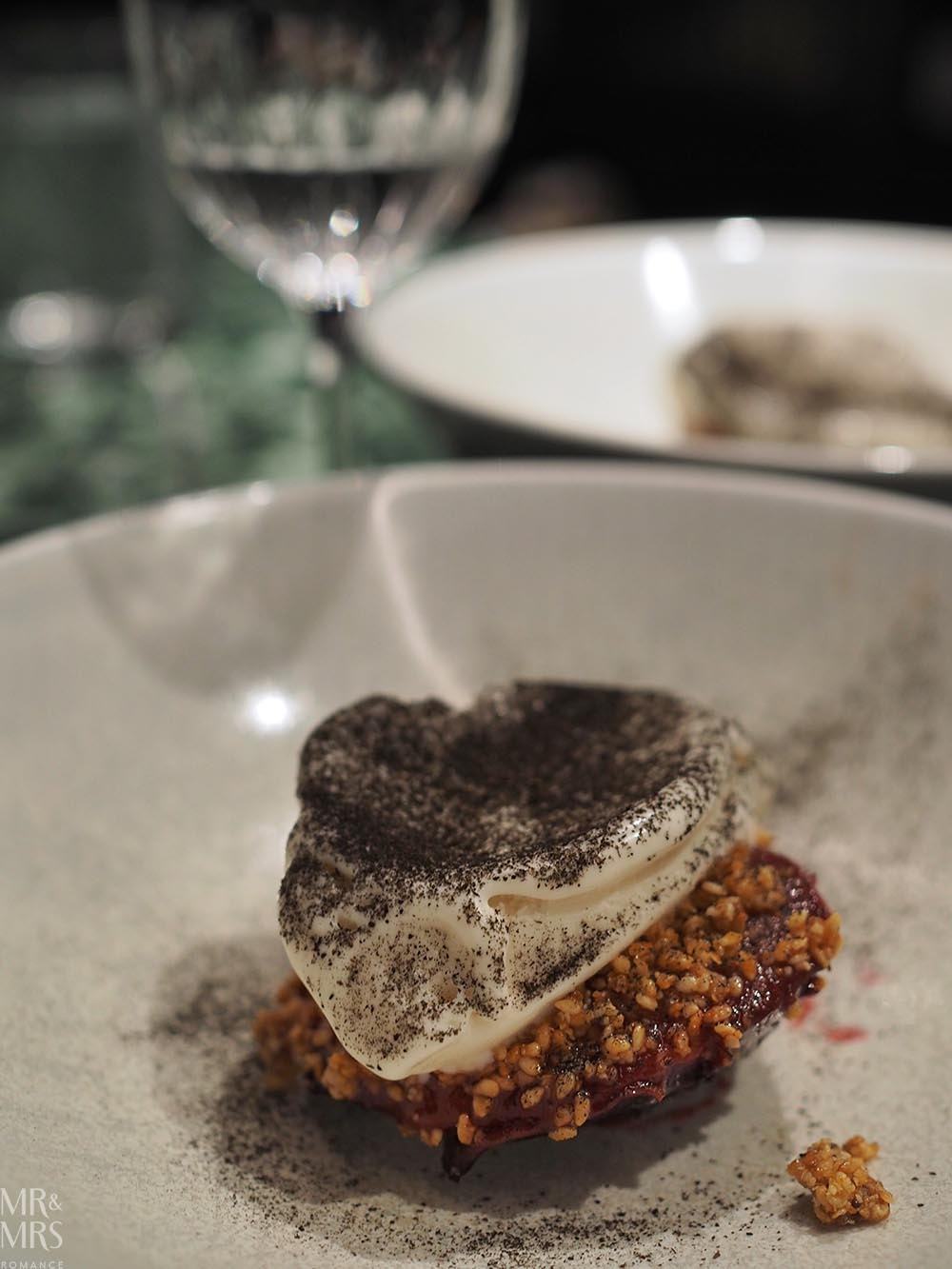 A note on the name

It’s unclear why this restaurant is called Essa. But a quick search reveals a startling number of possible translations—some of which are apropos. Others… not so much.

In French and German, essa translates as ‘try’ and ‘eat’ respectively. For the Balkans, the restaurant would be called This, while a range of countries, including Portugal, Spain, Rwanda and Uyghur speakers, it would be That.

In Italian, Essa would have the uninspiring title of simply It, while those speaking Tamil would know the restaurant as Music.

Turks and Ukrainians would read a more motivating name: Essentially and Yes respectively, while Bangladeshi folk would see the enthusiastic imperative Come On above the restaurant’s door.

Unfortunately, essa in Gujarati seems to be ‘ass’.

But whatever—or perhaps whoever—Essa takes its title from (I hope these translations haven’t caused offence!), this namesake pays tribute with its superb fare, generous service and elegant yet snug atmosphere.

We dined as media guests at Essa in collaboration with Visit Brisbane tourism authority, but our opinions based on our own experience remain our own.

Best Festivals in Costa Rica You Must See

Top 5 Things Your Husband Needs to Hear (and 25 Ways to Tell Him!)

23 Unmissable Things to Do in Southern California

14 Very Best Things To Do In Zakynthos, Greece – Hand Luggage Only

Best Festivals in Costa Rica You Must See

14 Very Best Things To Do In Zakynthos, Greece – Hand Luggage Only