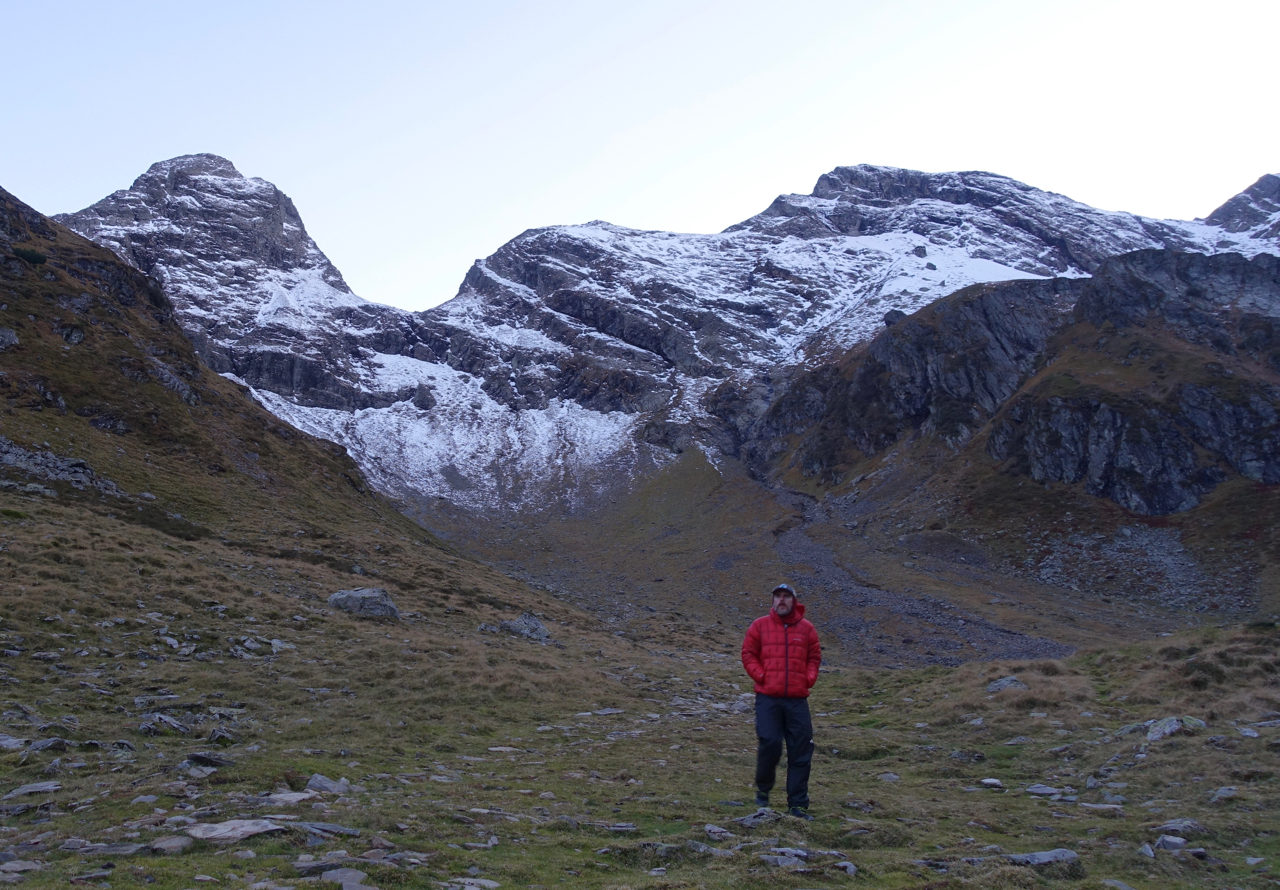 The Schladming Tauern mountains are a subrange of the Austrian Central Alps. Crisscrossed by a network of rugged footpaths, the ambulatory highlight of the area is its namesake high trail (Höhenweg) which features sweeping glacial valleys, knife-edge ridgelines, lake-dotted plateaus, and eye-popping summit panoramas. The Schlaminger Tauern Höhenweg was the second of four high trails I did in Austria during the fall of 2019, the others being the Wormser Höhenweg, Stubai Höhenweg (see Trip Report, Guide & Gear List), and the Berliner Höhenweg (see Trip Report & Guide/Gear List).

Closest Town/Base: Schladming. Situated in the heart of Austria, this touristy mountain hub is conveniently located on international train lines.

Located in a gorgeous basin ringed by an impressive collection of jagged rocky peaks, Giglach Lakes is where most Schladminger Tauern hikers spend the first night of their journey. The basin boasts two full-service mountain huts; Giglachseen and Ignaz-Mattis, the latter of which can be seen overlooking the lake in the center of the photo below. Both huts were closed when I came through in mid-October.

From the high point, I descended eastwards for about a kilometer through fresh snow, before arriving at the signposted saddle of Kruckeckscharte (2,274 m/7,461 ft).

From Kruckeckscharte, it was a further 2 km to reach Keinprechhutte (1,875 m/6,152 ft). Located in a stunning glacial cirque, the main building had been boarded up since late September, however, the winter room remains open all year round (Note: In the photo below, the winter room is located in the annex on the left of the hut).

I was privileged to have this peaceful alpine amphitheater all to myself. After doing some exploring, I turned in for the night, bunking down in the cozy winter room. Going by the number of blankets on hand, and the fact that it only sleeps three or four max, it would appear that Keinprechhutte can get a little nippy during the colder months (Note: It was a relatively mild -4°C/25°F during my stay).

For the gearheads, that’s a Montbell Plasma 1000 Alpine Down Parka and a Katabatic Alsek 22 quilt in the photos.

The next day I was once again treated to clear blue skies. After climbing up and over Trockenbrotscharte Ridge (2,237 m/7,339 ft), I dropped down to the rustic Landawirseehütte (1,985 m/6,512 ft), where I stopped for breakfast on the front patio.

Soon after leaving Landawirseehütte, the going became a little tougher and a lot snowier. The final ascent to Gollingscharte ridge (2,326 m/7,631 ft) was icier than a mother-in-law’s kiss, and I was more than happy to have packed the Salewa spikes (similar to Kathoola Microspikes), which I’d purchased a couple of weeks before at an outdoor store in Innsbruck.

After Gollingscharte, the trail dropped around 700 m (2,297 ft) in elevation, switchbacking down a long scree slope, passing a small waterfall, before eventually bottoming out at the idyllic alpine meadows of Gollingwinkel.

A short walk north of the meadows is the enchanting Gollinghütte (1,651 m/5,417 ft), where most hikers choose to overnight. However, feeling good and wanting to make the most of the fine weather (inclement conditions were on the cards for the following day), I decided to continue on for a few more hours. From Gollinghutte, I began climbing again in earnest, and after another 4 km (2.5 mi), reached the summit of Greifenberg (2,618 m/8,589 ft), the highest point on the Schladming Tauern High Trail.

From the summit cross of Greifenberg, the trail descended steeply along a jagged ridgeline, soon dropping into a stunning lake-dotted plateau known as Klafferkessel. This bewitching relic of the last Ice Age was the scenic highlight of the trail and I felt fortunate to experience it in such beautiful weather.

After winding through the Klafferkessel’s snow-ringed collection of tarns and lakes, the trail dropped precipitously into a deep and narrow valley before reaching Preintalerhütte (1,656 m/5,433 ft). I spent my second and final night of the hike in the hut’s tiny winter room, which was located in the attic of an adjoining storage barn, accessible via a short ladder climb.

The final 11 km (6.8 mi) of the Schladminger Tauern High Trail was hiked in dense fog and heavy rain. I wasn’t too bummed, as I knew that inclement conditions were on the cards, and I’d been blessed with ideal weather the previous day and a half. From Preintalerhütte, the trail climbed up and over Neualmscharte (2,347m/7,700 ft), before skirting the western shores of lovely Obersee and Hüttensee lakes. After a little under four hours I reached Seewigtal Car park, from where I was fortunate to procure a ride back to my hotel in the village of Schladming.

Disclosure: This post contains some affiliate links, which means The Hiking Life receives a small commission if you purchase an item after clicking on one of the links. This comes at no additional cost to the reader and helps to support the website in its continuing goal to create quality content for backpackers and hikers.

A Quick & Dirty Guide to the Berlin High Trail

A Guide To The Best Greek Wine