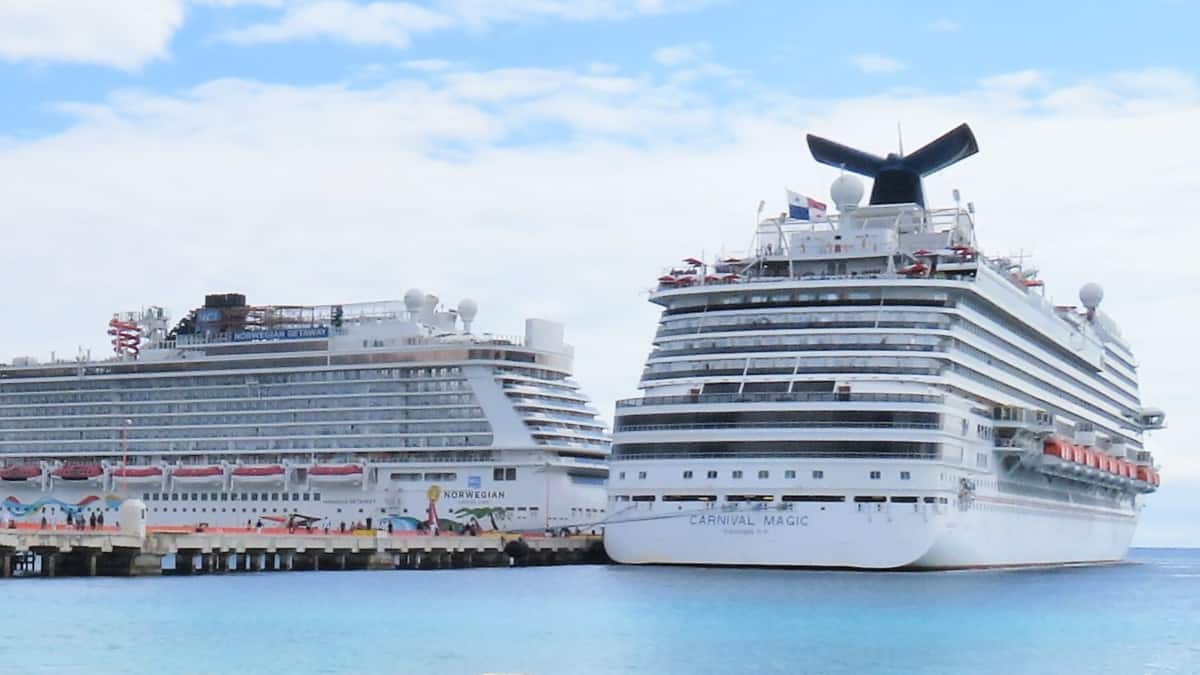 Just in case you’ve been busy this past week, we’ve got you covered with all the latest cruise news. Read-up on major developments, including from Norwegian Cruise Line, Holland America Line, Celebrity Cruises and Carnival Cruise Line.

There’s plenty of cruise news to catch up on with updates from major lines, including Norwegian Cruise Line and Holland America making major changes to onboard entertainment, Carnival Cruise Line bringing back a popular behind-the-scenes tour, embarkation port change for a Celebrity Cruises ship, the world’s first 5G cruise ship and NCL is adjusting itineraries due to its carbon footprint.

Travel agents and guests booked aboard multiple upcoming cruises on the Breakaway Plus-class Norwegian Joy are being informed of an itinerary change that includes a cancelled port of call. On many of the ship’s scheduled “Bermuda Virginia Beach” sailings, the call in Norfolk, Virginia, has been cancelled with no replacement port visit.

Instead, the ship will depart New York City as planned, spend two days at sea en route to Bermuda, enjoy the planned extended stay in that unique tropical destination, then return directly to New York without any other port visits.

A variety of 7-night roundtrip sailings have been impacted by this change, including the following departure dates:

It should be noted that Norwegian Joy‘s classic “Bermuda” itineraries remain unaffected, as Norfolk was never included as a port of call on those sailings, but the ship will now be operating many of the “Bermuda Virginia Beach” sailings without the “Virginia Beach” component.

Norwegian Joy weighs in at 167,725 gross tons and can welcome as many as 3,883 guests aboard at double occupancy, with 1,700 crew members to provide excellent service along the way.

Carnival Cruise Line will soon bring back the highly popular “Behind the Fun” tour that takes guests into crew-only areas onboard the ship, including operational areas. The cruise line’s brand ambassador, John Heald, hinted of the tour’s return recently on social media.

“A look behind the crew only door will be returning in early February,” Heald said. The exclusive, small group tour is one of the last features still on hold since cruising resumed in mid-2021.

Initially, along with other group features such as VIFP loyalty parties, children’s programs, and elite events such as the Chef’s Table dining experience, the tour was suspended to minimize crowding and reduce the risk of potential disease transmission.

Once cruising resumed and restrictions began to ease, staffing issues continued to cause challenges with offering small group experiences, and the cruise line focused its efforts on maximizing service to the most amount of guests. As staffing improved, however, different features were gradually brought back.

Now, the Behind the Fun tour is slated to return in February 2023, though other than “early” there has been no confirmation of the exact date the tour will begin to be available.

Adora Cruises is working towards a future where guests can enjoy a cruise experience with 5G connectivity and high-speed internet at all times.

The company is implementing a roadmap to achieve this goal, which includes expanding network coverage and executing high-speed satellite communication and various digital applications on cruise ships.

Guests will be able to enjoy worry-free always-on communication with the latest wireless communication technology available on board, including the option to choose between WI-FI6 and mobile 5G network packages.

If the cruise line does manage to achieve the speeds that 5G is known for, guests could expect up to 1000Mbps. As a comparison, Maritime internet from SpaceX reaches speeds of 100–300 Mbps, although this depends on the number of users online, something that has little effect on speeds with 5G.

Construction of the first ship for Adora Cruises is underway at the Shanghai Waigaoqiao shipyard and is expected to be delivered to the cruise line in late 2023. The cruise ship is being built in cooperation with Carnival Corporation.

Known for its refined ambiance and cultured offerings, Holland America Line is further enhancing its premier entertainment with a series of updates to the live music onboard its fleet of 11 ships. Each change is intended to bring a new experience to more guests, and to provide superior music for everyone to enjoy.

Rather than a quartet found on several ships, Holland America Line is elevating its partnership with Lincoln Center for the Performing Arts and taking those shows to the main stage.

Now, a traveling ensemble will perform throughout the fleet, using the ships’ World Stage main theater to accommodate more guests for the elite performances.

Six of the cruise line’s vessels will be getting an entirely new live band experience in Ocean Bar, where a contemporary trio will now play pop arrangements showcasing top hits from the 1960s through today.

The new Ocean Bar band will be introduced on Zuiderdam, Westerdam, Oosterdam, Noordam, Eurodam, and Nieuw Amsterdam beginning in February, though the complete rollout is expected to take until early summer.

On the Vista-class ships – Noordam, Westerdam, Oosterdam, and Zuiderdam – the new Rolling Stone Lounge will replace the former B.B. King’s Blues Club and will feature an expanded repertoire of R&B, rock, and pop favorites.

The lounge will feature live music six nights per week, with shows varying nightly. Koningsdam, Nieuw Statendam and Rotterdam will have the Rolling Stone Rock Room, featuring the best hits of classic rock.

Norwegian Cruise Line is continuing with its cutbacks, as some crew members are reporting the line is cutting cast members and other entertainment staff. In some cases, contracts were ended early, and recently hired workers were told not to report to their ship.

NCL informed crew members that it was moving into a steadier state of operations, including making some adjustments across its entertainment departments onboard ships.

An email from the cruise line: “After bringing our entire fleet back into service we have reached the time where we transition from operating in a ‘relaunch’ mode to a steadier state of operations. As part of this transition, Norwegian Cruise Line is adjusting its shipboard entertainment operations.”

Norwegian continues to say, “We regret to inform you that the decision has been made to reduce our Entertainment department manning across all vessels and as a result, your scheduled assignment has been cancelled and your services are no longer required.”

The show “Kinky Boots” is being discontinued on Norwegian Encore effective January 15, and staff were being sent home before their contracts were up. Others who were on vacation at the time of the announcement received notices to not return to their assigned ships. Norwegian’s press office did not respond to a request for confirmation about entertainment staff changes.

Entertainment staff reductions appear limited to Norwegian Cruise Line, since no mention was made of similar changes within Oceania Cruises or Regent Seven Seas Cruises.

Celebrity Cruises has reached out to guests aboard the July 31, 2023, sailing of Celebrity Apex to notify them of a modification to the embarkation port. Rather than setting sail from Amsterdam as originally planned, the cruise will now be embarking from Rotterdam.

Both port cities are along the eastern coast of the Netherlands, approximately 49 miles (78 kilometers) apart. Schiphol airport in Amsterdam is convenient to both cities, but guests will need to plan extra travel time to reach Rotterdam for an on-time embarkation.

All pre-purchased transfers arranged through the cruise line will be automatically updated to ensure guests reach the ship appropriately, and passengers using other types of transportation, such as ride shares, trains, or independent shuttles, are advised to adjust their plans as needed.

It must be noted that the embarkation time remains at 5 p.m. in Rotterdam, just as it was originally scheduled for Amsterdam. The reasoning for the change in embarkation port is stated as “changing operating hours at the Port of Amsterdam,” with no further explanation. This, however, may be related to other cruise ship changes in recent months at Port of Amsterdam due to local salinity levels.

Other than the change in embarkation port, there have been no other changes made to the July 31 Celebrity Apex sailing at this time. The 9-night cruise will visit a variety of ports in Norway before returning to the Netherlands and debarking in Amsterdam on August 9, 2023.

It was just another busy week of cruise news across the industry. We’ve got all the coverage on Cruise Hive, including Royal Caribbean canceling calls due to the weather conditions in the Bahamas, Viking Cruise detailing a 180-day world cruise, P&O Cruises reporting its biggest-ever booking day thanks to Wave Season, a second rescue at sea for a Celebrity cruise ship, MSC World Europa makes history at Arabia Gulf port and much more.