RV Fire Happens Too Often. This Could Save Your Life! 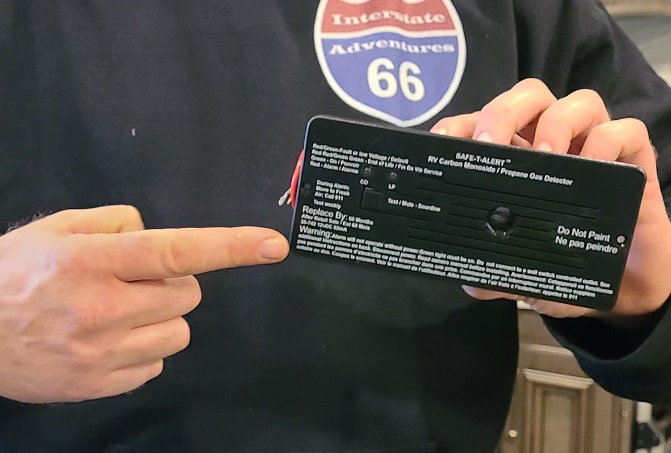 RV Fire safety is not something any of us should take lightly. The National Fire Protection Association (NFPA) says that roughly 2,000 RV Fires happen every year. If you live in your RV like we do, the odds of you having one go through the roof.

There are several things you can do to help prevent an RV Fire from ever happening, or help prevent serious injury or even death if one does happen. It’s not something any of us want to think about, but a little prevention goes a long way.

You may even be thinking you’re ahead of the game without even knowing you’re behind the 8 ball. When you buy an RV, they come with a hard wired CO Alarm, smoke detectors, and even a fire extinguisher.

Do you know how long those things are good for?

I will admit I didn’t think about it either until last night. We were blissfully sleeping off a night of hanging out with the neighbors, when I woke up to that ear piercing chirp. Then I did what we all do at 2am when we hear it.

I got up, took the batteries out, and went back to bed. Stupid, I know. Tell me you haven’t done it yourself though. We are all guilty of popping the battery out of a smoke alarm during thanksgiving and forgetting to put it back in once in our lives.

I’m not saying it was my brightest idea ever, just that we are all guilty of overlooking the small stuff, and having it turn into something big. A few minutes later, that chirp goes off again, and then again.

It turns out it isn’t even the smoke alarm. It’s our CO alarm in the kitchen that was beeping. Did you know those things are only good for 5 years? I didn’t. I mean, I Did, but it wasn’t something I put any thought into even after being a firefighter for 20 years.

Then once I slapped myself for overlooking it I got to thinking. What else have I overlooked?

RV Fire From a Propane Leak

What are the odds, right? I’m willing to bet again that most of us have had a “What’s that smell?” moment before realizing one of the stove burner knobs turned on a little bit.

What if that happened right before you went to bed, and then the furnace kicked on? Our RV doesn’t even have a propane detector. But it will now.

When looking for a replacement CO alarm, I came across this combination CO and Propane detector. It’s 65 bucks on Amazon, which may seem steep but, If it lasts for 5 years that’s only $13 a year for peace of mind.

Now I know that my Wife and I are even safer than we were before and I can sleep a little easier. The new CO/Propane Detector is flush mount, so it doesn’t stick out like a sore thumb, and not even as much as our old CO detector.

It is hard wired to the house batteries in our Fifth Wheel, and installing it only took 5 minutes. The hardest part was trying to figure out how the old one came off the wall. It slides up by the way. Then you just need to cut the red and black wire off the back of the old one. Splice them onto the new one, and screw it to the wall.

Pretty easy project to keep your family safe, and now I don’t need to worry about it for the next 5 years. The smoke detectors in your RV are the same as the ones in your house. They operate on a 9 Volt battery that will need to be replaced from time to time. Do they have a limited lifespan too?

They do. While the manufacturer says they last about 10 years, I’m going to add “Replace smoke detectors” to my list of things to do when I have to replace the CO alarm.

Overkill? Maybe, but for 10 bucks, it just doesn’t make sense NOT too. Let’s face it, over the next 5 years you’re going to spend more on the batteries themselves than you are to replace the smoke detector a little earlier than you need to.

Let’s face it, the campgrounds we stay in can be dusty places. If that dust builds up inside the smoke detector it could reduce its effectiveness, and I’m just not taking the chance for 10 bucks.

If you bought a used RV like we did, It may not have come with a Fire Extinguisher. Even if it did, how old is it? The fire extinguishers in every public place you go have to be inspected and recertified every year.

The fire extinguishers in the public places you go, with fire exits, minimum sized doors, and sprinkler systems, have to be recertified every single year.

Those ones just hang on a wall that doesn’t move. The ones in our RV’s are jostled and bounced for thousands of miles and never given a second thought until we need it and it doesn’t work.

Add replacing your fire extinguisher to your “every 5 years” list too.

When you do replace it, just know that there is a difference. In an RV you want an ABC extinguisher. An ABC extinguisher will fight normal combustibles like wood and curtains and paper, as well as oil, gas and electrical fires.

This is the one we replaced ours with, and it fit right into the holder from the factory.

Some things just can’t be stopped from happening. Some things can. There are several things you can do to help prevent an RV Fire from ever starting in your rig.

Let’s face it these things aren’t known for their expansive floor spaces and counters you can shoot a music video on. Space is tight, so make sure you are keeping flammable items away from your stove stops.

Another thing you can do is turn things like your water heater, both electric and propane, off when not using it. It may sound stupid but generally speaking if it isn’t turned on it can’t malfunction. There are exceptions to everything, and it could still happen, but turning appliances off when not in use greatly reduces the likelyhood.

Electrical fires in RV’s seem all too common a thing these days, especially with 2 different electrical systems. It doesn’t matter how new your rig is either. We’ve met people who literally left the dealership and headed to a camp site, plugged it in for the very first time and then watched it burn to the ground.

Sadly, most RV’s are mass produced, which comes with it’s own set of safety hazards. For example, do you know you don’t need to be a licensed electrician to run all the outlet and appliance wiring for the RV manufacturers? Yup. Totally true.

Check your outlets frequently, because unfortunately, there will probably be a day where you were glad you did. This is what the outlet for our fireplace looked like.

Shoddy Construction Is Too Common

I only found it because we hit the deepest pot hole ever which knocked our fireplace off the wall.

When I unplugged the fireplace to repair the wall is when I saw the outlet. After taking it out to replace it, I was less than pleased to see how they go together. It isn’t like the ones on your house with nice solid screws. Nope.

They don’t even strip the jacket off the wire with the RV outlets. They simply push the wire into a groove that has two metal blades like an open pair of scissors. The blades cut into the jacket and touch the wire inside.

If you’ve ever done your own electrical you know that is just asking for a disaster. That connection isn’t what anyone in their right mind would call Good.

We replaced most of the outlets in our RV after finding that one, and again, it was a small expense, but the peace of mind is priceless.

Check your 12 Volt wiring too, a simple wiggle on the wires in your battery compartment may be enough to find a loose connection. If you were able to shake it loose without much effort, just imagine what your next 1,000 mile road trip would do.

If you aren’t comfortable working with electrical, find someone who is that can check some of these things for you. It could be a mechanic, family friend, or the same electrician you use for your home.

NOT checking things in your RV, or replacing the safety equipment before it expires, could literally cost you your life. Take the few minutes to check the few things, then head out on your next trip without a worry.

How Is It Possible the Bicycle Was Invented After the Locomotive?

How Is It Possible the Bicycle Was Invented After the Locomotive?