Pit Boss Review, Is A Portable Smoker Any Good For Camping? 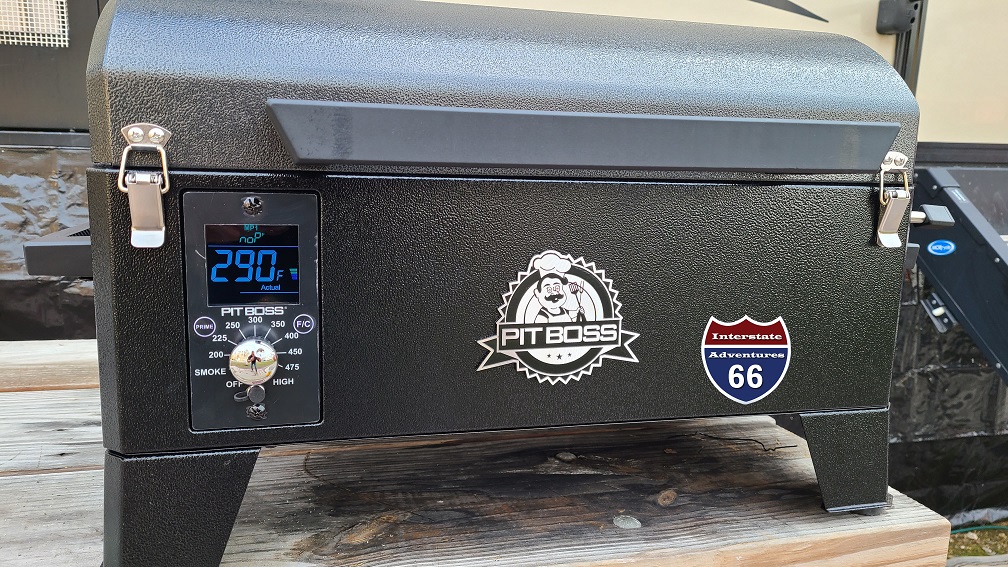 We bought our Pit Boss on a whim. I’ll be honest with you, I had no intention of even buying one. My buddy Sean got one for Christmas, and we were talking about it and how compact it was.

A few days later he was at our local big box store and called to say they still had one on the shelf. I asked if he could grab it for me and we would settle up later that evening. I’m really glad I did.

Right out of the box it was heavier than I was expecting. Not so heavy that it is cumbersome, but heavy enough that you know right away it’s going to last a few seasons.

Putting it together took maybe 10 minutes, 3 of which were because I never read the directions. You only have to put the legs and the handles on it when you take it out of the box. I was happy to see that they all attach with screws and not pop clips.

The grill rack is large enough to put a 5 pound brisket inside the grilling chamber, which is awesome because brisket is my thing. The hopper for the wood pellets holds a really decent amount of fuel, and priming the feed screw only took a minute.

Only thing left to do is a 30 minute burn to clean any residue from the build process off and it’s ready to go.

This is my FIRST EVER electric controlled smoker. I will be the first to tell you I called those guys cheaters my whole life. Smoking is a process, an art form, an all day affair where I get to shrug off my chores because I’m making dinner at 8 am.

I’m a cheater now. Call me a hypocrite if you like, I would.

The set it and forget it ease of use is exactly why so many of my friends have made the switch from charcoal and wood.

Off to the store to pick up a 20 pound bag of apple wood pellets, and a few chicken breasts to give this thing a try. I know, I said brisket is my thing. Why am I using chicken?

Chicken is a great blank canvas if you ask me. We all know what grilled chicken tastes like. So by using chicken, I should be able to get a good read of just how well the Pit Boss is going to do. I turned the dial to Smoke and let it go for an hour.

This is Too Easy (This is where I usually drink a beer while I watch the charcoal to make sure it’s burning how I want. Guess I’ll go listen to my Wife tell me about her day or something instead…)

Now that the chicken has a good hour of smoking on it, time to kick the heat up a little to finish cooking it.

(This is where I usually drink another beer while I stoke the fire to bring the temperature up to the sweet spot. Guess I’ll go hear more about the sale they have at Kohls…)

A simple turn of the dial from Smoke to 225 and the Pit Boss kicks into action and brings the temperature right up. A few minutes later and we are ready for a taste test.

How Did It Do

I picked up a pair of nice big breasts for this test. Not because I dislike small breasts, but because I wanted to see how deep the smoke layer would be. So for this test, the bigger the better I say.

A 1 Hour run with the Pit Boss set to Smoke yielded this result.

That is a decent penetration for a one hour run if you ask me. And there was no constant monitoring of charcoal or wood. Just turned it on then learned all about Kohl’s Kash.

The flavor was no disappointment either. On the first bite the chicken is still juicy and evenly warm all the way through. The apple flavor from the wood is dominating my taste buds just as I had hoped it would.

The outer layer of the chicken is crispier than the inside just the way I like. The Pit Boss gets 2 Thumbs Up from me. Now it’s time for a REAL test.

It’s 6am and the sun isn’t even up yet. I put my Texas dry rub on the 4 pound brisket last night after dinner so it would be ready to go right on this morning. The hope is that it should be ready to come off the grill around 2pm running at 225 degrees all day.

And now we wait…

Starting with a full hopper of Apple Wood Pellets at 6am, it ran the entire day without needing a refill. Every time we walked out of our camper the smell of the apple smoke permeated our campsite, and a few next to us.

I had a remote thermometer in the center of the brisket so I could keep an eye on how quickly it was heating up during the cook. The temperature rose at what I would call a perfect rate, right up until the stall. About 160 degrees brisket will Stall Out, where it seems to not take in any more heat.

The reason for that is because the evaporation effect of the meat cooking cools it at the same rate the grill is trying to heat it. I have had this last almost an hour on my charcoal smoker, which is enough to put you into a panic.

With the Pit Boss the stall out was only about 15 minutes. I’m not sure if that is because of the fan forced heating effect or what, but that was a welcome change from my charcoal days. We let the Pit Boss run at 225 until about 1pm. Then I switched it from 225 to Smoke.

On the smoke setting the temperature comes down to about 180 degrees, and the Pit Boss starts puffing like a freight train. I let it run like that for the next hour to get a heavy dose of that apple wood smoke flavor on the bark. Hopefully when I open the lid this thing looks like the meat candy I’m picturing in my head.

I’m as excited as Ralphie on Christmas morning when he got his Red Rider BB Gun. This is exactly how I was hoping it would look.

The bark looks dark and crispy. You can see that there is still juice seeping out of the fatty areas. Lifting the brisket off the grill is still feels like a hefty piece of meat which tells me the inside is going to be nice and juicy.

Now the only thing left to do is walk in the RV and proudly present my meat to my Wife for dinner.

A slice across the corner of the meat reveals a crispy outside with a tender inside. The first bite tastes like candy. The Pit Boss kept that perfect temperature going for the entire day and perfectly converted the fats into sugars. This is some of the sweetest meat we have ever had that came off a smoker.

Is It Good For Camping

The Pit Boss portable smoker is hands down staying on our list of things to keep in our RV. Not just because we are living full time in our RV, but even if we weren’t.

It is compact enough that it doesn’t take up too much room in our storage area. The pellets last for the whole day in the hopper. We can throw dinner on it in the morning, and it is ready when we get back from the activities for the day.

Clean up is super easy. All the drippings fall into the cup that easily comes off the side of the grill. The grill grate and drip pan lift right out of the grill area. Everything is cleaned up and reassembled in less than 5 minutes.

The only down side I see, is when all your neighbors smell dinner cooking all day you’re going to have to set a few extra plates at your picnic table tonight.

After dinner we are running out to Kohls. Something about double Kohls Cash or something…

RV Slang And Acronyms You Need To Understand

History of Massage in Asia

History of Massage in Asia