My 22 Favorite Stops on the Longest Malecon in Latin America 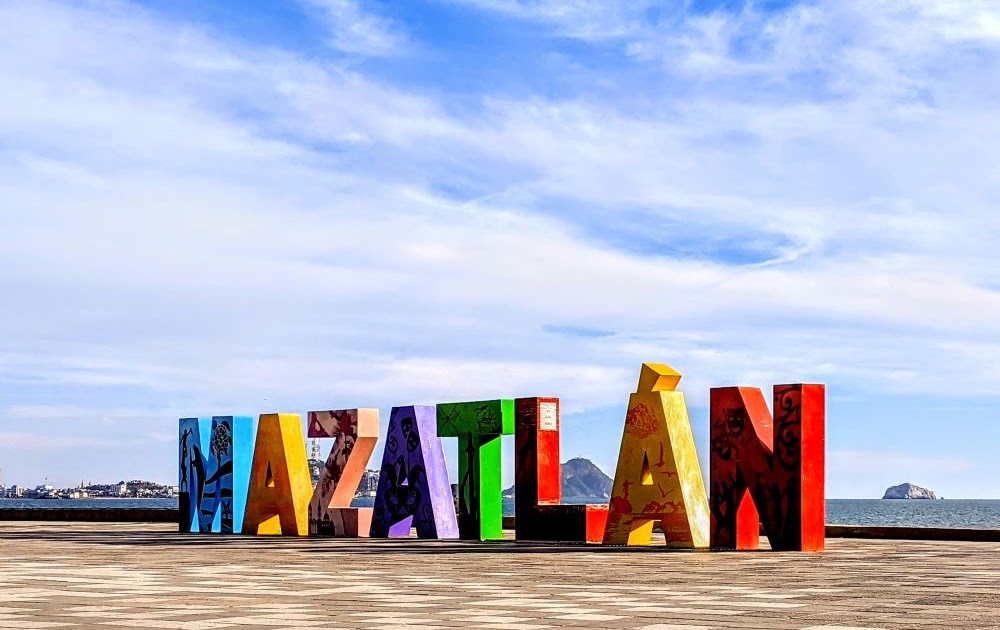 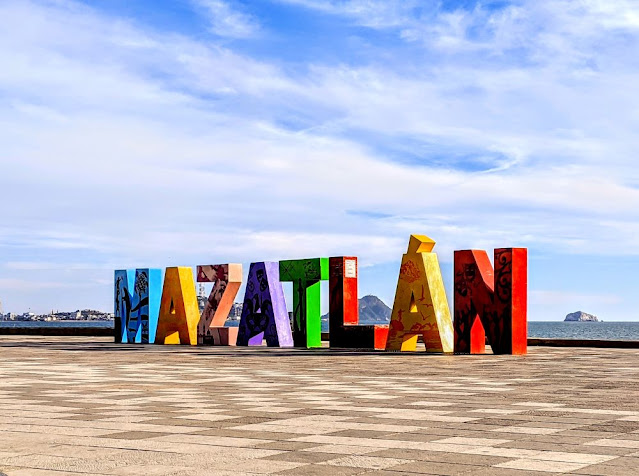 The original article was published in Travel Awaits on April 14, 2022

A malecon is
a seafront promenade where people enjoy strolling, jogging, biking, or just breathing
fresh ocean air. While spending our winters in Mazatlan, I have never been able
to walk the full length of the Mazatlan Malecon in one go. At 13 miles, it is considered to be the
longest in Latin America.

A trip to this
Malecon treats anyone not only to glorious sunsets, exotic islandscapes, and enchanting
views of the Sea of Cortes. It gives you Mazatlan in a nutshell: eight monuments,
four beaches, eight nearby landmarks, a range of eating places, plenty of lodging
options, and great shopping. In fact, it becomes the party zone when it is
closed to vehicular traffic during festive holidays.

The main boardwalk
is spacious, over 30 ft. wide at its broadest with a separate biking lane, rental
bike stations, and even free wifi. During the days of the Carnaval which runs along Avenida del Mar
that hugs the Malecon, huge monigotes (puppets) make it even more colorful. It stretches
about seven miles from south of the Zona Turistica (Tourist Zone), the Centro
Historico, to the edge of the Zona Dorada (Golden Zone), the famous shopping
district. Beyond the boardwalk, the Malecon goes farther north as walkable
beaches behind resorts. 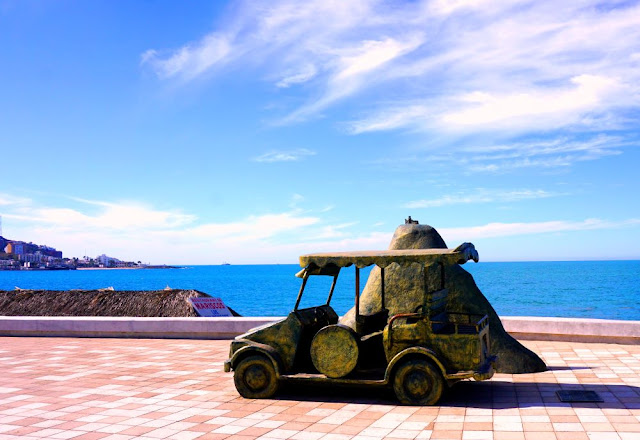 Just added
in 2018, the colorful Letras de Mazatlan, the backdrop for many a souvenir
photo, marks the start of the boardwalk at the southern edge of Zona Dorada. Let
me take you on an imaginary walk to the southern end, stopping at the eight
significant monuments that introduce you to what makes the city tick.

The first comes
just a few yards after the sign. The Family Monument was designed by Antonio Saenz Lopez as a lovely bronze
sculpture meant to welcome the 2000s. It depicts a Mazatlecan family: father, mother,
and child, looking out with great optimism for the arrival of the new
millennium. 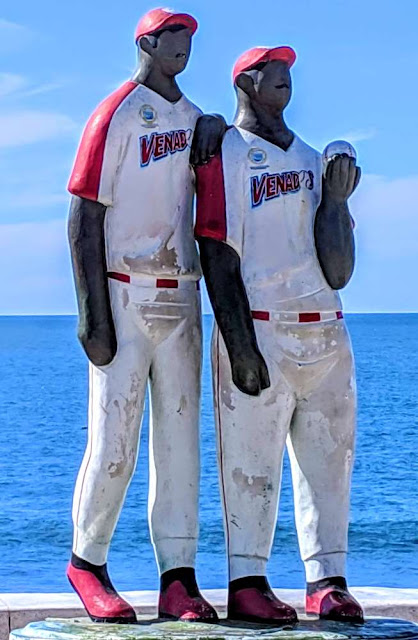 Also
designed by the same artist, The Monument to the Baseball Player is next. The Venados de Mazatlan
(Mazatlan Deers) is the beloved baseball team of the city, a member of the
prestigious Mexican Pacific League, which selects the Mexican representative to
compete for the Latin American title.

One of the
most iconic symbols of Mazatlan follows: the distinctive Pulmoniya Monument. Resembling a souped-up golf cart, it’s of a
life-size open “taxi,” the signature popular transport option in the city, so
named because, being open to strong winter winds, riding in one may actually give
you pneumonia.

Following the
Pulmoniya is a tribute to the California sea lions that make a small rocky island,
now an ecological reserve on the Sea of Cortes, their home every winter. The Sea Lion Monument depicts five life-sized sea lions, a
large prominent male on a rocky rise with four others surrounding him.

Afterward, we
come upon the large, imposing Fisherman’s Monument and Fountain located before you reach the
fishermen’s piers. Sculpted by Rodolfo Becerra Gomez, it celebrates Mazatlan’s
heritage as a fishing center. The striking monument features a man and woman, a
tall structure representing El Faro, the city’s famous lighthouse, and a
ribbon-like sculptural element representing the Tropic of Cancer, Mazatlan’s
location.

Next is The Mazatleca Woman, unveiled in 1983, saluting the city’s
women who are reputed to be some of the most beautiful in the world. She has outstretched
arms, and at the base are the names of Mazatlan personalities like Lola
Beltran, the famous Mexican singer from El Rosario at the outskirts of
Mazatlan. 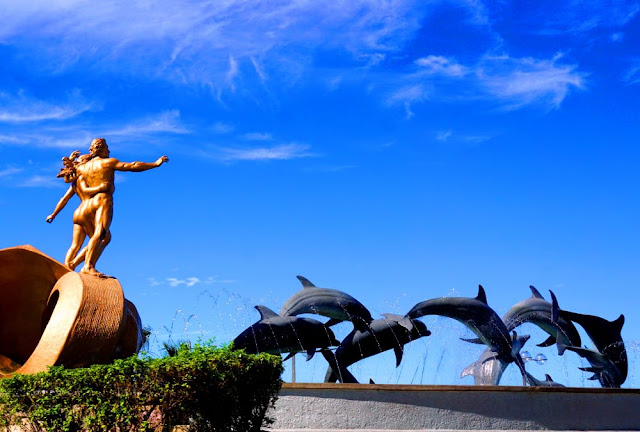 And then we come
upon the magnificent monument highlighting dolphins jumping out of and into the
water with a man and woman calling out to them. It’s called The Continuity of Life Monument symbolizing the beginning and end of
life and celebrating life balance and respect for nature.

Finally at
the end of the boardwalk, a monument pays tribute to the Mexican superstar, singer,
and actor Pedro Infante (1917 to 1957). Erected in 2004, The Pedro Infante Monument shows him on a motorcycle reminiscent
of his famous 1951 movie “A Todo Máquin.” It also celebrates Mazatlán’s
Motorcycle Week, held annually around Easter. 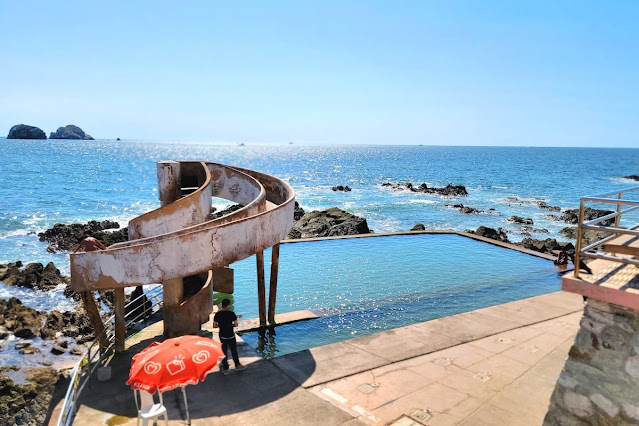 These
monuments are distributed around the four beaches of Malecon. As we turn around
from the Infante Monument, we first see the prized beach Playa Olas Altas, Beach of the Big Waves. During the
summer rainy season, it is not suited for swimming, but it attracts surfers and
tourists from around the world because of its beautiful waves. At its northern
end there is an enclosed, saltwater pool called La Carpa Olivera which local families
particularly enjoy.

Until you
reach the Letras de Mazatlan, there are three other beaches. The first is Playa
los Pinos, a short stretch of fine sand where fishermen sell their catch in the
morning. Next is the Playa Marlin where tunnels connect the beach to hotels
across the street. At this beach, you will begin to see many palapas where you
can have inexpensive food and drinks. The last beach is Playa Norte, a long
stretch of uncrowded tan sand that ends at the Letras, just a few steps from
Valentino’s. 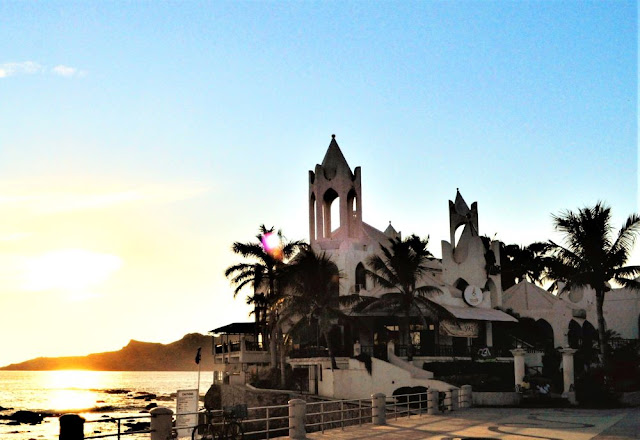 Valentino’s is that mystical structure commonly
used to grace the beachfront in many works of art. A Moorish style palace, it
was a disco icon of the 70s and 80s, equipped with the most advanced special
effects and selections of music. After financial struggles, it’s slowly
experiencing a rebirth. If we turn around and walk the Malecon a third time, I
can point out to you the eight other landmarks near and around the boardwalk.

For example,
the Monument to the Baseball Player looks out to the 16,000-seat Teodoro Mariscal Baseball Stadium just a short block from the Avenida
del Mar. It is named after the man who introduced the sport to the city. Also a
short block from the Avenida a little farther south stands The Acuario,
the Mazatlan aquarium that offers popular shows featuring sea lions, divers,
and even sharks. Continuing south, before reaching Olas Altas, the Old Mazatlan
Sign graces a children’s plaza. 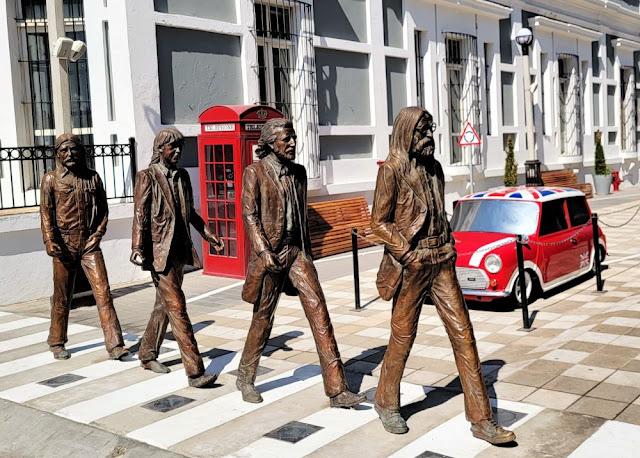 At the start
of Olas Altas, there is an attraction inaugurated only in December 2021.  The Beatles Callejon features the bronze statues of the four
Beatles crossing Liverpool Alley that starts from Avenida del Mar. They are
accompanied by the ubiquitous London red phone booth, a classic red British car,
and even a yellow submarine!

Right in
front of the Beatles is a roundabout where the Deer Monument stands. It’s a bronze sculpture of a spirited
young buck, a testament to the indigenous roots of Mazatlan which literally
translates as the Land of the Deer. At the end of Olas Altas, on another
roundabout, you see the Monument to the Shield of Sinaloa (mosaic, on the side facing north) and Mazatlan
(on the other side). 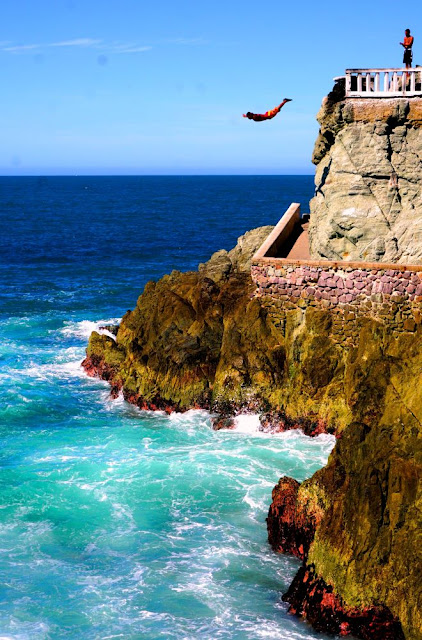 Soon after
this last monument is the fishermen’s pier, a section of the Malecon dotted by
many boats and where many birds flock. Then there is usually a throng of people
at

Punta de Clavadistas or Divers’ Point. That’s where
divers regale onlookers, jumping from the 50-ft cliff, avoiding huge rocks,
plunging into the water, swimming against big waves hitting the rocks, and
returning to the small park to do it all over again, all for a few pesos.

Pro-Tip: The
famous Centro HIstorico with the grand Basilica, the popular
Mercado Pino Suarez, and the gathering area Plaza Machado with the Angela
Peralta Theater is just a few blocks east of Olas Altas.

Where to Eat at the
Malecon

We have
mentioned the palapas, food outlets along the beach where you can get fresh and inexpensive fish, shrimp
and beer. There are also two great beach restaurants on the Malecon: Restaurante
Playa Norte and El Muchacho Alegre. A lot more eating places are across Avenida
del Mar, especially in the Olas Altas section.

Pro-Tip: We
had lunch once, farther north, at Roca Mar where bacon-wrapped jumbo shrimp and
other dishes were a great alternative to all-inclusive food at the resort. 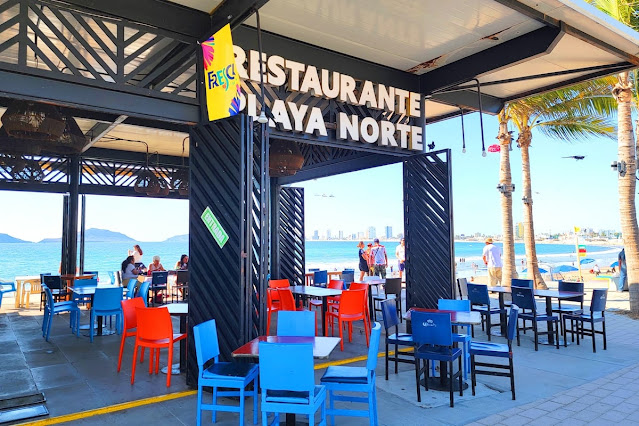 Where to stay at the
Malecon

Avenida del
Mar is lined with private condominiums and hotels across from the Malecon,
beginning as low as $29 a night. There are four 4-star hotels averaging $110+ a
night, and nine 2-and-3-stars averaging $80+. Hotel Hacienda is one of those.
It was where we rented temporary raised platform seats from which to watch the
Carnaval in 2018.

Pro-Tip:
Hotel Miramar is the name of
the private condominium on the Malecon where El Chapo was arrested by US Navy
Seals.

Where to Shop at the
Malecon

The
boardwalk is also lined by many mobile souvenir kiosks. I have bought a Panama
Hat for $6 there, faux Gucci glasses for $10, and other cool stuff. Many souvenir,
beach essentials, and convenience stores are also interspersed among the
hotels, condominiums, and restaurants.

A visit to
Mazatlan would never be complete without a walk along the entire seven miles of
the Malecon boardwalk. Stay there and exercise, sight-see, swim, learn about
the city’s history, values, and traditions, take souvenir photos, shop, and eat…all
in one place! It is an entire destination; as I said in the beginning, it’s Mazatlan
in a nutshell.

6 Destinations for an Outdoor Workation

What Is the Easiest RV to Drive?