If You Find Yourself Without a Tent, Overnight, in Winter, Here’s What You Do 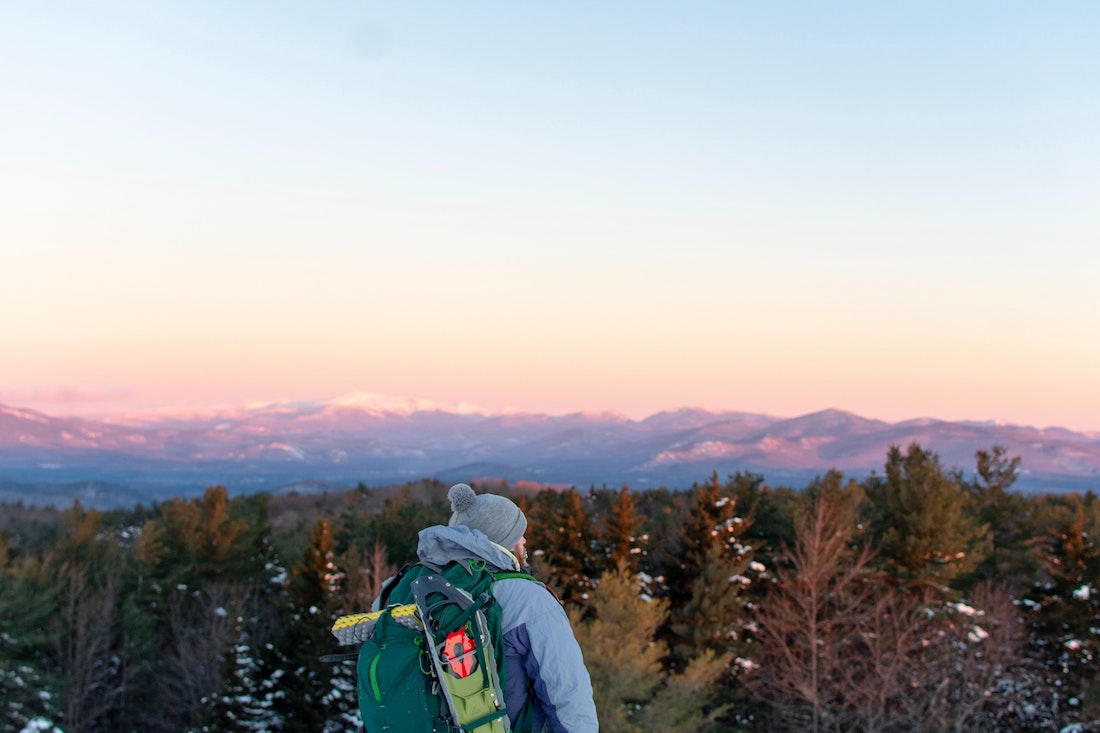 Imagine that you’re on the Greenland ice sheet, a hundred miles of barren snow screaming away to every compass point, only your snug yellow tent protecting you from the dangerous, otherworldly exposure. Or heck, let’s just imagine you’ve tired of cushy evenings on the couch with the boobtube and pitched that yellow tent in your subzero backyard—in Utah, North Dakota, Maine, wherever. Soup in the vestibule-kitchen is bubbling, almost done. You reach for the cookpot and… the stove tips, blue flames kissing the tent’s dangling nylon door. In an instant—whoosh!

Disastrous conflagrations of this sort actually happen (to explorer-types especially, and likely to stoners who bring the bong as well). But the fact that the accidental flick of a Bic can torch your domicile, leaving you with the killer stars for company and your prayers for a house—this isn’t the sole reason to camp in the frigid season without a tent. Those killer stars, for example: they’re really quite stunning, and a roof tends to ruin their twinkle. Weight is another issue: the gear required for a January journey can be oppressive, and ditching eleven pounds of wadded fabric means a springier step (or glide), plus bonus room in the pack for bacon, butter, and whiskey. Also, as gaiters and balaclavas thaw, a tent with a floor transforms into a nasty swimming pool.

Tomorrow is for microwave pizza and sweatpants. Tonight is for the ancient animal ache of knowing you’re alive.

In many scenarios, a bombproof refuge is integral, so please don’t interpret the following list as encouragement to be dumb and ice-b-cube yourself. (When I worked at the South Pole, years ago, a Finnish solo skier who appeared at the station told me that the difference between life and death “out there” is whether you can erect your tent in one hundred and twenty seconds.) That said, having spent fifteen consecutive winters toying with tentlessness, I assure you that certain outings do allow for experimentation. As always, start small: the backyard first, then maybe Greenland. 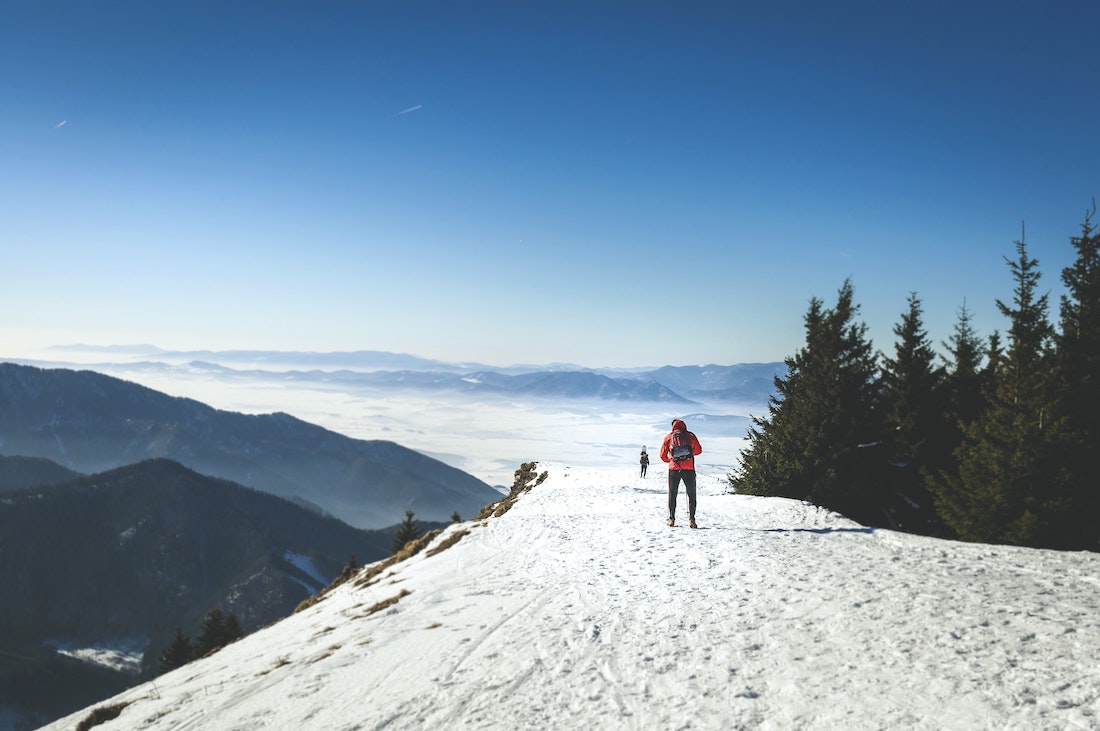 You went out there to explore, right? So do more of it, it’ll keep ya warm. Photo: Michal Kmeť/Unsplash

By definition, winter is a period of short, pinched days and long, stretching nights. In my native Vermont, the solstice sun vanishes by four in the afternoon and doesn’t properly rise until eight in the morning—and in the North Cascades or Yellowstone, if a ridge looms over our shoulder, night’s grip further tightens. (Forget Alaska.) Sixteen hours is a ridiculous amount of time to be cooped in a tent, shivering and playing travel Scrabble.

Okay, but presumably you’re in the backcountry to snowshoe, crank splitboard laps, make snowmen/women, study wolverine ecology, do something or other, right? I suggest taking an extra lap and collecting an extra wolverine turd—that is, pursue your passion late and begin again early. A key to camping without a tent is minimizing the “camping.” Keep active. Keep the blood pumping. Your toes will appreciate forty-five minutes chiseled from the monolithic cold of night. (Syncing your trip with a full moon is a great chiseling technique, too.)

Hide From The Wind

I once read The Last of the Mountain Men, about a twentieth-century hermit who resided in the Idaho wilderness. Lots of lessons to be found in this dude’s experience, but the one that remains with me goes like this: A wet wind will dispatch you licketysplit. Mr. Hermit had suffered a bit of everything—he lived a profoundly raw, rugged life—yet a wet wind was what scared him most.

Wind. You must consider it when choosing your campsite, even if the day was pin-drop calm. (When it roars at midnight, you’ll be sorry). Scrutinize the drifts to determine prevailing direction of flow. Tuck behind a craggy outcrop or a screen of shrubby willows. If you’re in a giant Colorado meadow or on a vast frozen Wisconsin lake, construct a wall: with blocks of crusty snow, with plastic sleds, anything. Get low and stay low. 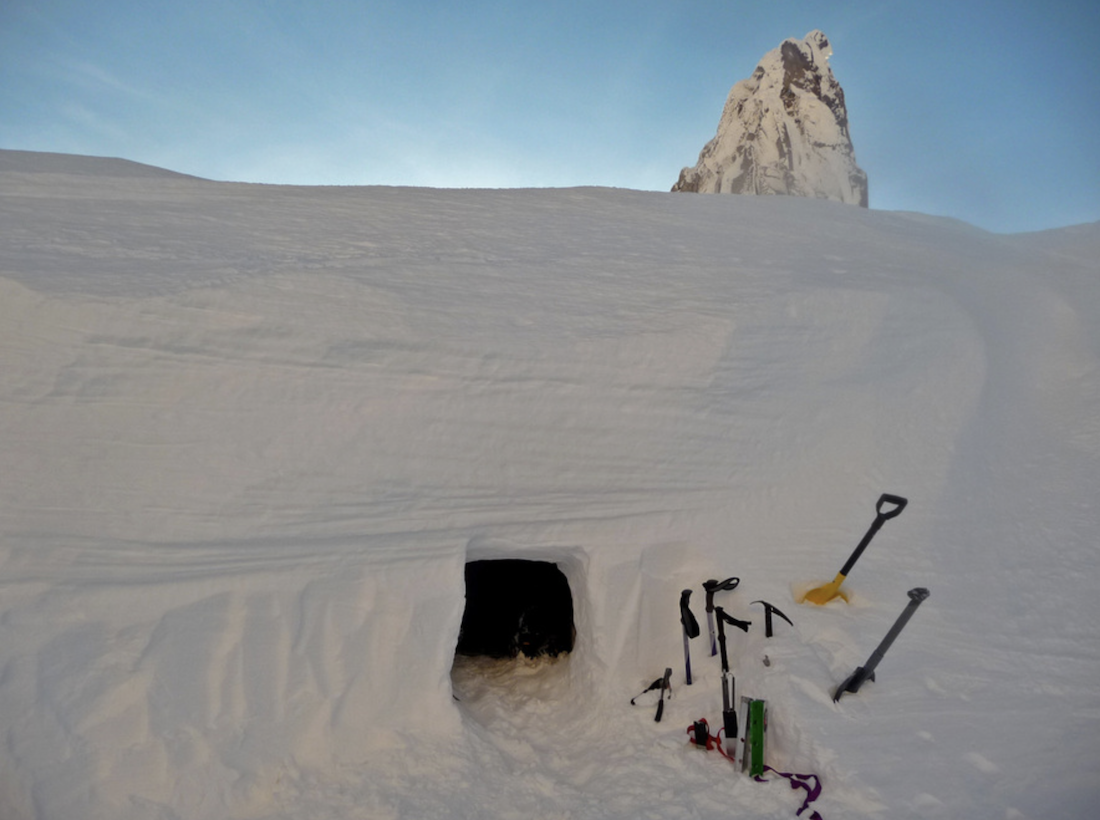 Do you know the word subnivean? It’s an adjective—“situated or occurring under the snow”—that typically references the zone inhabited by mice, voles, and shrews. Often when I’m borderline hypothermic, Nordic touring at dusk or bushwhacking a local hill to catch the sunrise, I picture those little furballs relaxing beneath my boots, toasty in their cubbies and corridors: compacted silver crystals for a ceiling, parched brown grasses for a carpet

Everybody’s familiar with the igloo, but conditions have to be perfect for such a structure to stabilize. Better to burrow, to create a negative space with an avalanche shovel (preferable to pawing with mittens). Snow caves can be dug into a bank or slope. Quinzhees involve heaping snow and then excavating. (If you heap around a stash of backpacks, then pull them out later—voila, you’re halfway to a hollow.) Claustrophobic worm-tunnels are self-explanatory. Due to the insulating properties of snow, a single tea candle becomes a woodstove. And these shelters aren’t flammable!

On a two-week ski trip through the ponderosa pines of Arizona’s Kaibab Plateau, I prepared each breakfast and dinner on a bonfire, which saved a ton of fuel (annoying, expensive, heavy MSR canisters) and supplied cheery, cozy entertainment during the aforementioned monolithic cold of night. Poles and scavenged sticks served as drying racks for soggy socks and damp thermal undies. Crappy gloves were clutch for yanking the sooty cauldron of baked beans from its bed in the embers.

And speaking of beds: sprawling beside the blaze, cowboy-style, may seem appealing, but half of you will freeze, and every hour you’ll have to wake and toss on another couple logs. However, if you rig a tarp like a lean-to (envision a 45-degree angle), with the opening facing the fire (duh), you can trap enough of the outgoing energy to snooze. Similarly, it’s smart to build the fire against a backstop, a boulder or ledge that reflects warmth your way.

Padding, padding, padding. A thick foam pad should always—repeat always—separate you from the heat-sucking earth (air pads are iffy: pop!). Additionally, the tarp you used as a minimalist lean-to can double as a groundcloth, holding at bay the sneaky snow that wants to infiltrate your nooks and crannies. Empty stuff sacks, stinky boxers, even a Ziploc of garbage can be incorporated into the elaborate nest. Padding is padding.

Oh, but all that’s pretty obvious. What wasn’t obvious to me, a decade ago, was conifer boughs: You’re an idiot not to form a mattress… nature provides! So bellowed an enthusiastic Vermont pal, a devotee of old-school woodscraft. He taught me to snap off twenty or thirty hemlock branches (the forest has plenty to spare) and lay them down as one would shingles—overlapping, in the same direction. The botanist’s mnemonic device can aid your selection process: Firs are flat and friendly, spruce are spiky (and abusive). Six inches of greenery as a base is deluxe. 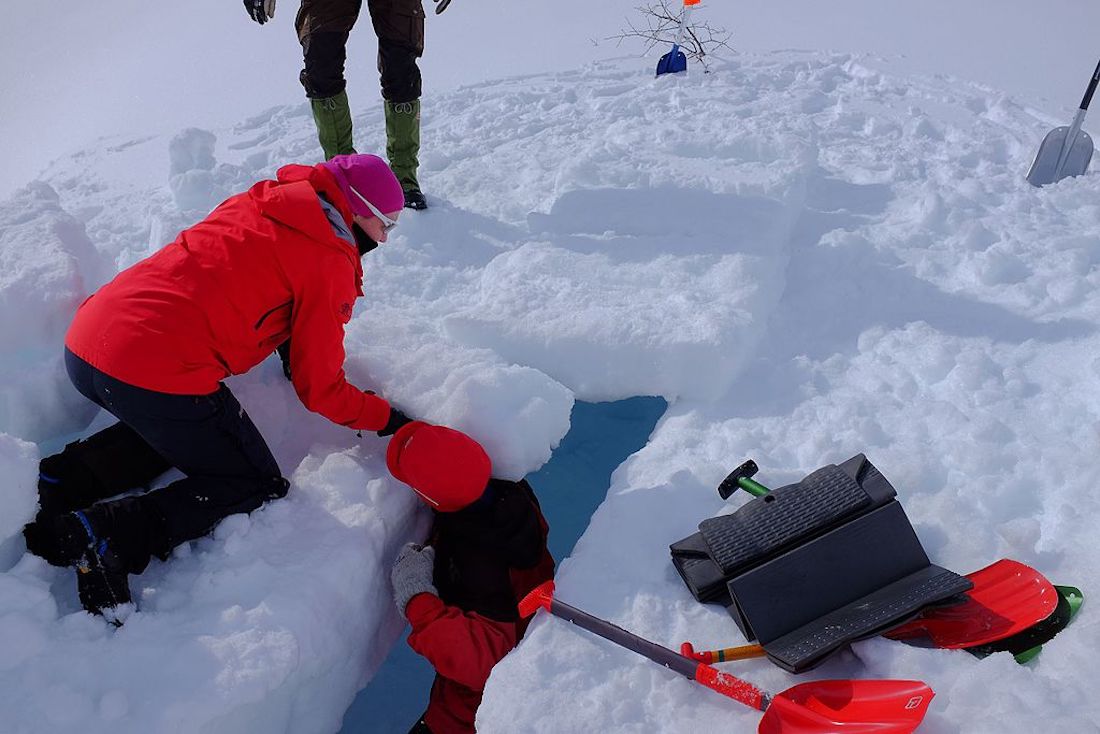 Give Your Sleeping Bag the Hot (water bottle) Foot

Anybody who has watched an Everest documentary is aware that while physical fitness, technical skill, and heroic grit are handy, a mug of black tea is superior. Hydration equals warmth, of course, as does sugar (apply it generously), as does water that’s been brought to two hundred and twelve degrees Fahrenheit and poured into the mug of oneself. Henry David Thoreau describes life’s core challenge in Walden: “to keep the vital heat in us.” A tent is nothing but a thermos, a tool designed to retain the vital heat. Why not cut to the chase and just keep the body humming with cup after cup of steaming, spine-tingling brew?

It’s not only the alpinist who gets thirsty, though: sleeping bags do, too! A classic trick is to boil extra water, fill a Nalgene bottle, and kick it toward the foot of the bag. But check the threads. If they leak, you will enter the Fifth Circle of Hell. (A buddy employs a dog in lieu of a Nalgene—the terrier curls around her clammy tootsies, farting and snoring. Be warned: canine leakage, also Hell.)

Snuggle In A Blanket Of Cold (Read: Accept)

Warm is the holy grail, no doubt. Beauty ensues, the brain space assigned to grim survival liberated to wander and enjoy—a chickadee’s song, a leafless aspen’s skeletal architecture, a distant peak’s peachy alpenglow. But come here, let me whisper a secret in your pale, waxy, frost-nipped ear: You can’t be warm when winter camping! With a tent, without a tent, in either case… you’re screwed!

Thus we arrive at the ultimate piece of equipment, the ultimate hack—your mind. Manage expectations, i.e. recognize that if comfort was the goal you’d be on the couch with the boobtube or poaching a hotel hot tub or vacationing in Hawaii. The goal is not comfort. The goal is season, place, an unadulterated encounter with elemental truth. It’s those killer stars—getting close enough to feel their prick, but not any closer. Tomorrow is for microwave pizza and sweatpants. Tonight is for the ancient animal ache of knowing you’re alive.

Hiking Patagonia: where do you start?

9 offbeat trips to escape the crowds in 2023

14 Best Hostels in Bangkok for Solo Travelers, Party & Chill in 2023

Hiking Patagonia: where do you start?

14 Best Hostels in Bangkok for Solo Travelers, Party & Chill in 2023