Can Shooting a Buck’s Antler Kill It? This Hunter Says He Did 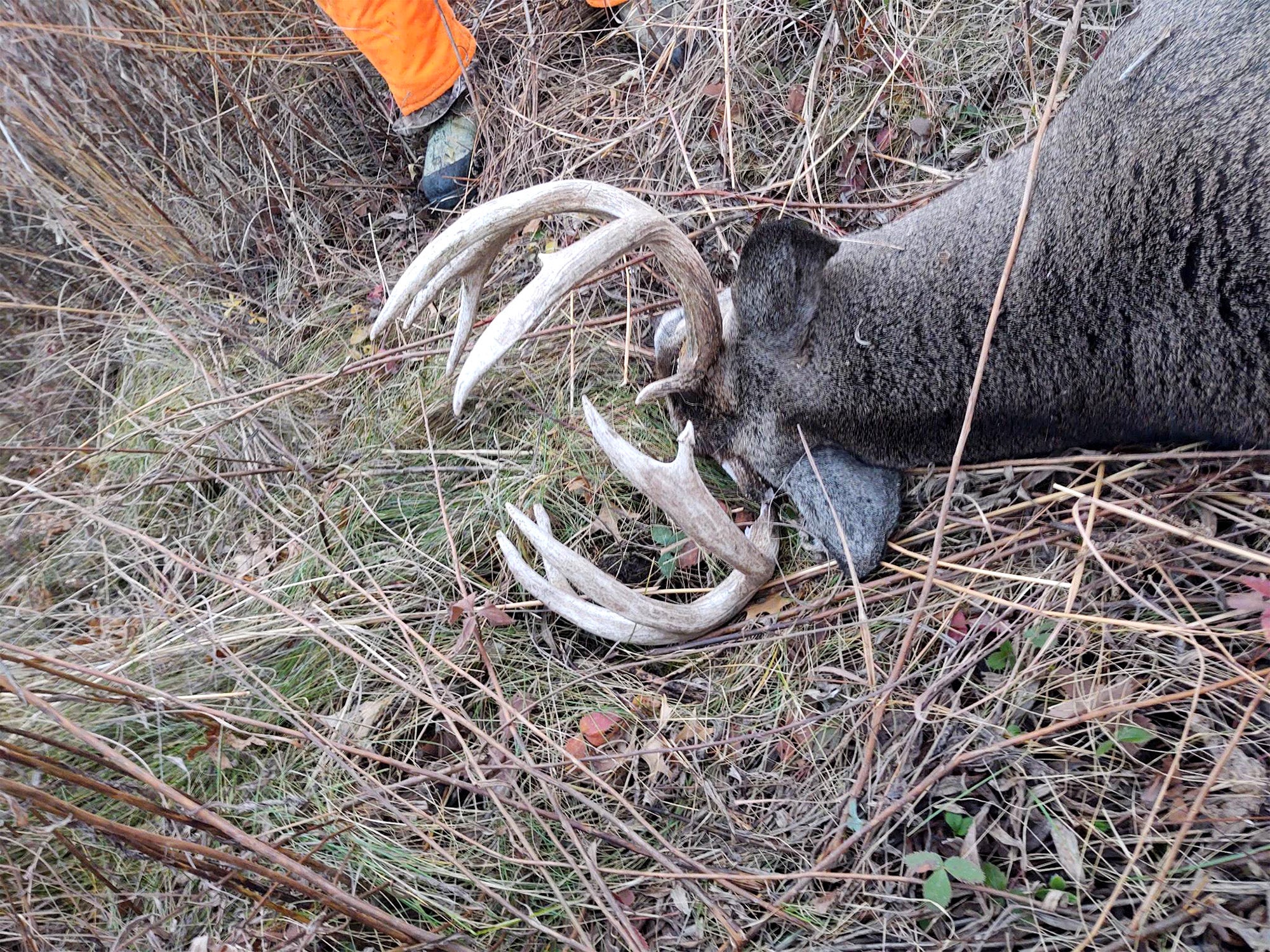 A Minnesota deer hunter is pretty sure he killed a buck by shooting its antler off, but he’s still scratching his head over the whole thing. What he does know is that the 11-point buck (now a 10-point) dropped in its tracks after three shots were fired. There were no entry or exit wounds on the deer, and no blood trails or bullet holes—just a broken-off left antler and a missing brow tine.

“My first thought was that after I shot off its antler, the buck must have passed out and crashed into the ground and broken its back,” says Stacy, who asked for his last name to be left out of this story. But after taking the buck to a game processor, he says he’s not sure if that even explains what happened.

“We think it just died after I hit the antler,” he continues. “The antler actually went farther than the buck did. The deer dropped immediately, and the antler probably went another five feet farther.”

Stacy tells Outdoor Life that he was hunting with his buddy, Tom, late in the day on Nov. 6 when they jumped the buck. The two men were on a small piece of private land near Dexter and they had been sitting across a field from one another for most of the afternoon. Both were hunting with 12-gauge shotguns.

It was getting close to dark when Stacy climbed down from his stand and walked around the field to meet up with Tom. They’d both seen a buck bed somewhere in the field that afternoon, and they figured there was a good chance they’d bump the buck as they walked back across the field together. They were right, and when the deer jumped up to run from about 35 yards, Stacy shot first and missed.

The buck kept running away from the two hunters. When it got to about 45 yards, they each fired another slug.

Read Next: Hunter Wounds Buck, Then Recovers It Hours Later After It’s Hit By a Car

“He shot and I shot almost at the same time—mine was a second later,” Stacy explains. “And then it dropped.”

The two hunters walked right up to the buck, which quivered for a moment and then lay still. The first thing they noticed was that its left antler was shot off near the base. It was lying on the ground roughly five feet away. They found no blood aside from the small amount that had dripped from its mouth, and they couldn’t see an entry or exit wound anywhere on its body. After gutting the deer, they noticed a big hump in its back, and as they drove home with the buck, they replayed the whole scene in their heads. They figured Stacy’s slug must have hit the antler, while Tom’s shot must have hit the buck in the spine, killing it instantly. (Because of the shot angles they had, Stacy says it would have been tough for Tom to hit the antler.) They hung the deer in the dark, and both went to bed assuming Tom had killed the buck.

“The next day we were taking [the buck] in to get processed. We’re loading it up in his truck and I said, ‘Tom, where’s the hole? There’s no hole here,’” Stacy says. “So, he got to looking and feeling—and nothing. I said, ‘Tom, I think this might be my buck and not yours.’”

Still puzzled, they brought the buck to the processor for a second opinion. The processor skinned the deer and, after taking a closer look at the hump on its back, he explained that the hump was surrounded by scar tissue and was clearly from a previous injury. The processor searched and searched, but he was unable to find another wound anywhere on the deer, and he concluded that Stacy’s antler shot must have killed the deer on the spot.

While he’s certainly not proud of the shot, Stacy says it’s one of the biggest bucks he’s taken off the property over the last 10 years. He plans to make a European mount, but acknowledges that he’ll need some epoxy putty and a bit of creativity to pull that off.

Kip Adams, chief conservation officer at the National Deer Association, says that while he’s never heard of such a thing, it’s not out of the realm of possibilities for a hunter to kill a buck by shooting its antler off. He explains that it would take a serious amount of trauma for this to happen, and that a 12-gauge slug would be more likely to cause this “slam to the head” than a typical rifle bullet.

“The shot probably hit the antler low, close to the pedicle,” Adams says. “It would have to be an incredible amount of trauma, but if something just really rocked that antler base, I guess it’s possible that [the shot] could cause enough trauma to the front of the brain to kill it.”