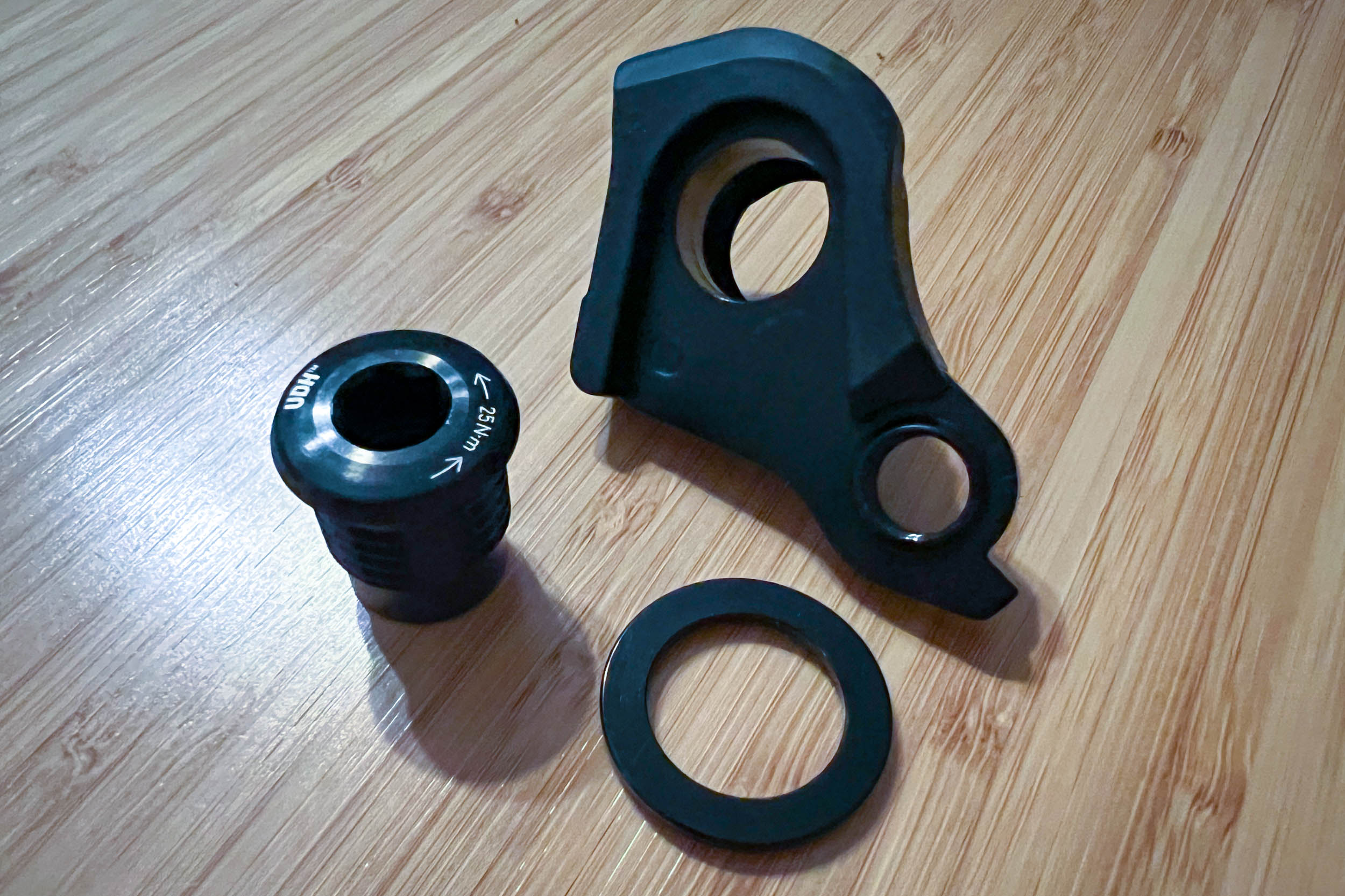 Nearly every bike that can shift gears has a small, unassuming part that goes unnoticed 99.9% of the time.

But in the rare moments when it becomes an issue, it can be a massive headache that will definitely end a ride, and possibly even put a bike out of commission for days or weeks.

A derailleur hanger is a small component that fastens rear derailleurs to a bike’s frame. It is a single point of contact critical to making a drivetrain work, as it holds the derailleur in the position required to link up with the cassette and chain.

If it breaks, your ride is over.

For a long time, this component has been tricky to deal with or replace. It tends to bend when it takes hits, which instantly throws drivetrains out of whack. It can even snap completely, a feature rather than a bug.

Derailleur hangers are supposed to break away in the event of a significant impact to save the frame and derailleur itself, both of which cost much more to replace.

When that happens, riders have no choice but to pick up a new derailleur hanger. However, because there hasn’t been a historical standard for this component, most riders find themselves in a Cinderella predicament, trying to locate the glass slipper of a derailleur hanger to fit their bike.

Because nearly every brand has proprietary hangers that often differ from bike to bike, bike shops rarely keep them in stock.

This issue became particularly pronounced during the pandemic when massive shortages in bicycle componentry hit the market. A broken derailleur hanger could mean a long time out of the saddle.

However, in 2019, the folks at SRAM released a potentially game-changing component with the opportunity to make swapping out a derailleur hanger as easy as throwing on a new chain.

SRAM’s Universal Derailleur Hanger, or UDH for short, is an attempt to create a standard derailleur hanger compatible with any bike or derailleur.

SRAM designs the platform to work across builds and brands and allows others to use and slightly modify their design — provided it still meets the specs to fit.

“A bike brand may want to make their own, slightly different derailleur hanger with different features. This is OK,” said SRAM.

“However, in order to mark their frames with the UDH trademark, they must conform to UDH frame and hanger specifications. This ensures that if a rider breaks their hanger, it can still be replaced with a standard UDH hanger.”

SRAM’s UDH is not truly “universal” just yet. But a litany of bikemakers — that seem to have seen the value in offering a standard, simple fix to a problem that has plagued consumers for decades — have come on board.

Brands that equip bikes with the Universal Derailleur Hanger include the big guys like Trek, Giant, and Specialized, along with other high-end manufacturers across the globe, including Canyon, Cube, Ibis, Merida, Orbea, Santa Cruz, Scott Sports, Transition, and many more. Check out SRAM’s extensive list for a complete directory of bikes ready for the UDH.

SRAM puts the number of bikes compatible with the UDH in the hundreds and says more are joining daily.

First, the UDH has a lip that meets the bike’s frame, preventing a chain from dropping onto the frame. Instead, it forces the chain back onto the cassette, avoiding those wince-inducing sounds of a chain raking across a frame.

Second, the UDH can rotate backward if it takes a big hit. That means it can take much more force than a traditional fixed hanger without snapping off or sending a derailleur into the spokes of a rear wheel.

Why the UDH Matters

Compatibility is a problem in the cycling world. Almost countless component options, from cassettes and chains to shifters, bottom brackets, and hubs, make building and maintaining bikes challenging even for seasoned cyclists. Creating standard components is an easy way to help riders spend more time on their bikes and less time mulling over spec sheets and measurements.

Similar things are happening in the world of hookless rims. Many manufacturers are trying to figure out a standard that will improve compatibility with a sometimes-temperamental product.

It’s only been a handful of years since the UDH went live. As more brands adopt it, it could eliminate a nagging problem for cyclists.

SRAM Groupset Hierarchy Explainer: What You Need to Know

Whether evaluating a new bike or planning to upgrade one you already own, you’ll need to understand the various component specs. Read more…

Waterfowl Fall From the Sky After Lunar Eclipse in Oregon