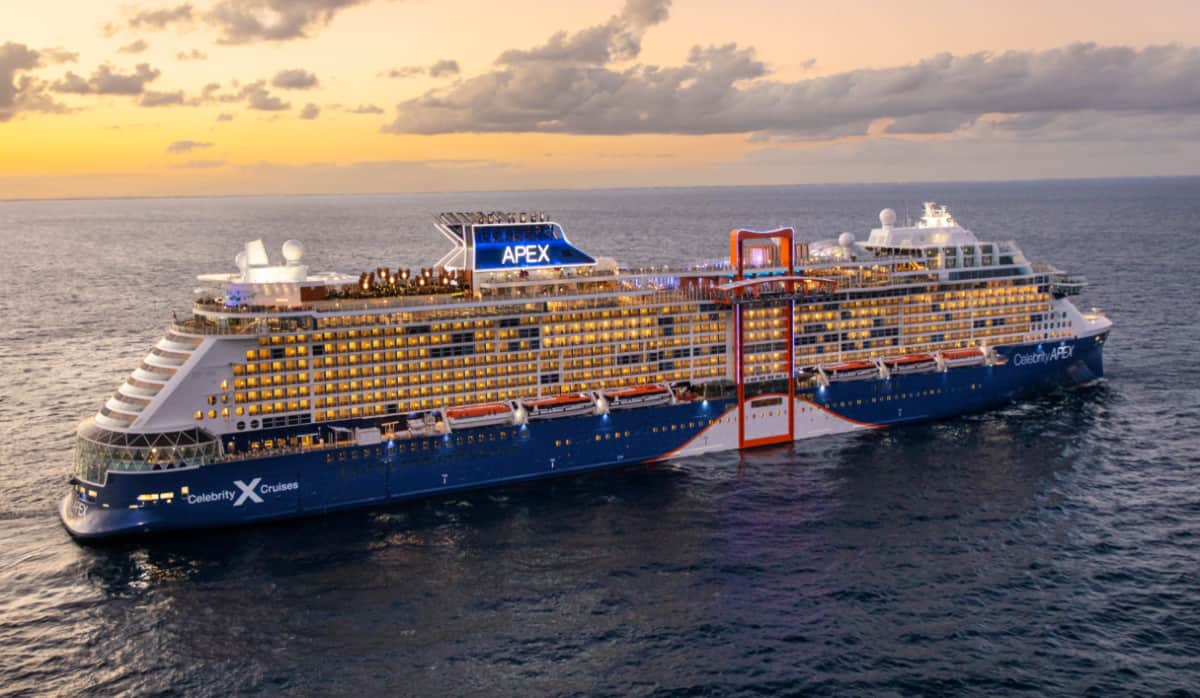 Celebrity Cruises announced it will base one of its newest, state-of-the-art cruise ships in the UK from May until November 2024. Celebrity Apex is an award-winning cruise ship heralded as one of the world’s most beautiful premier cruise ships.

From its homeport of Southampton, the largest cruise port in the UK, the Edge-class cruise ship will explore beautiful European destinations such as the Mediterranean, Norway, and even the Arctic.

The second ship in the line’s award-winning class will replace the recently-revitalized Celebrity Silhouette, opening up a new way for guests to explore Europe in style.

With Southampton becoming an increasingly popular cruise port in Europe, Celebrity Cruises have decided to send one of its most modern ships to the UK for the majority of 2024.

Celebrity Apex will sail four-to-13-night voyages from May to November 2024, exploring some of the most stunning European destinations.

Celebrity Cruises VP of Europe, Middle East and Africa (EMEA), Jo Rzymowska, added: “The UK has always been integral to the success of our brand, and homeporting Celebrity Apex from Southampton underlines our commitment to this market.”

“There is a huge appetite from UK guests who share our curiosity for people, places, and cultures and our passion for opening up the world through a love of travel. I’m looking forward to welcoming even more of our guests on board Celebrity Apex when she raises the bar for cruising from Southampton in 2024.”

Celebrity Apex is an Edge-class cruise ship, a class of cruise ships that have redefined how modern cruise ships look. Even the new Icon of the Seas, the upcoming largest cruise ship in the world from Royal Caribbean, has taken several design features from its sister brand. The 130,818 gross-ton cruise ship has space for some 3,405 guests.

Lisa Lutoff Perlo, President & CEO of Celebrity Cruises: “This truly is an exciting moment for us. Having one of our award-winning Edge Series ships sailing from Southampton will offer an experience like no other from the UK, connecting guests to the world around them through the innovative outward-facing design and visionary spaces these celebrated ships are known for.”

Four-to-13-Night Sailings From May to November 2024

UK-based cruisers will be able to experience Celebrity Apex for the first time in May 2024. From the UK’s largest cruise port, the cruise ship will operate a series of four- 13-night cruises sailing to some stunning destinations.

For the first time from the UK, Celebrity Apex will venture above the Arctic Circle on a 12-night cruise to the Norwegian Fjords and Norway’s most northern city, Honningsvag.

Along the way, the ship will visit Tromso, the region’s capital city, where guests can explore the area’s natural beauty, the stunning Fjord village of Flam, and Geiranger.

It’s not just cold areas where Celebrity Apex will be sailing. The ship will also be making its way south to the Mediterranean, visiting the party island of Ibiza for the first time. Apex will also visit Gran Canaria and Barcelona, Spain, and Madeira, Portugal.

Those who wish to experience the Edge-class ships earlier than 2024 can already do so in 2023 in Europe. All three Edge-class ships will be making their way to Europe next year. Celebrity Beyond will be sailing from Rome, Italy, to ports in Italy, Turkey, Croatia, Greece, and more.

Celebrity Edge will sail from Barcelona and Rome next summer, visiting France, Spain, and Italy. Finally, Celebrity Apex will be based in Amsterdam, the Netherlands, exploring a variety of Western European ports before sailing a select number of cruises from Pireaus, Greece.

The fourth Edge-class cruise ship, Celebrity Ascent, is currently under construction at the Chantiers de Atlantique shipyard in France, she is scheduled for delivery during the fourth quarter of 2023.

18 Wonderful Things to Do in Segovia, Spain (Don’t Miss Out!)

18 Wonderful Things to Do in Segovia, Spain (Don’t Miss Out!)