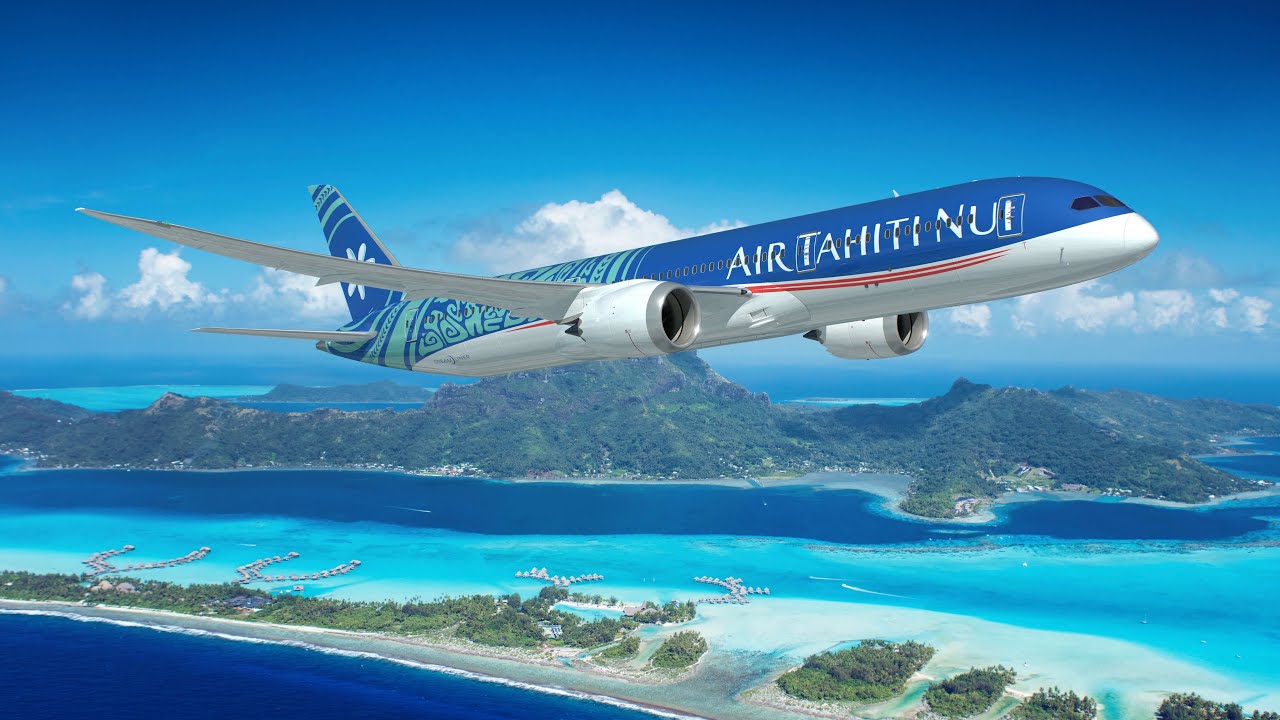 I recently enjoyed an incredible holiday in French Polynesia (Tahiti, Moorea, and Bora Bora). You can read my trip reports here:

Last September, I flew with Air Tahi Nui from Charles De Gaulle Airport in Paris to  Faa’a International Airport in Tahiti, with a short stopover in Los Angeles. This is my review of the second flight leg (Los Angeles to Tahiti). One of the great things about flying with Air Tahiti Nui is the tropical ambiance of its Boeing 787 aircraft, which immerses you in the “mana” of the Tahitian island as soon as you step onboard. For example, a stunning floor-to-ceiling photo of Bora Bora island takes center stage in the plane’s entry galley, a reminder that the plane is about to head to French Polynesia, one of the world’s most beautiful paradises. Upon entering the plane, the traditionally dressed and always smiling cabin crew also hands out Tiare flowers, the national flower of the islands of Tahiti. It all evokes a sense of holiday, which helps to leave behind the annoyances and stress of getting to and through the airport. The onboard experience was great as well (especially the food), as you can read below.

On a side note, this flight was a huge challenge for me as I am a very nervous flyer, especially when flying over the ocean. Flight time from Los Angeles to Tahiti is 7 hours and 30 minutes, and the entire route goes over the Pacific Ocean (there are no islands or land masses along the way). The Pacific is the largest and deepest of the world’s oceans, so if a problem occurs over this endless pond of water, the nearest diversion airport might be hours away. Therefore, aircraft operating over the Pacific Ocean (or any other ocean) need to be ETOPS certified, which stands for Extended-range Twin-engine Operational Performance Standards. ETOPS certification requires a set of standards: it must be demonstrated that flying with one engine is safe, and that the airline has hight training & maintenance standards. Air Tahiti Nui can operate under ETOPS 225 standards, which means that its ETOPS-certified aircraft can fly on routes that are 225 minutes from suitable alternate airports (e.g. Hawaii), a statement to the carrier’s impeccable safety reputation.

Have you ever flown with Air Tahiti Nui? If so, what was your experience? Leave a comment.

In this review (more information & photos below my YouTube video):

In 1996, Air Tahiti Nui was founded to connect the world to one of the world’s most paradisiacal destinations, the islands of Tahiti. The Government of French Polynesia – an overseas collectivity of France – is the airline’s major shareholder along with other local investors. IN 2019, Air Tahiti Nui entirely renewed its fleet – then consisting of five Airbus A340-300 aircraft – by 4 Boeing 787-9s, which it proudly calls its  “Tahitian Dreamliners”.

In 2018, in anticipation of its new fleet of Boeing 787-9s, Air Tahiti Nui launched its redesigned brandmark and updated typography. The redesigned logo is a joint collaboration between Future Brand and Polynesian contemporary artist Alexander Lee. The re-drawn logo represents a tiare flower, the airline’s emblem from the start of its history, depicted in a two-thirds view, with the profile of ‘vahine (woman, in Tahitian) in its pistil, a nod to Tahiti’s reputation for beautiful women and flowers in the South Seas.

Air Tahiti Nui operates its flights from Paris to Tahiti with a stopover in either Los Angeles or Seattle. At Los Angeles International airport (LAX), the transfer is a remarkable smooth and easy process. Air Tahiti Nui operates from the Midfield Satellite Concourse (MSC) terminal, a new extension connected to the main Tom Bradley terminal via an underground pedestrian tunnel. After landing from Paris (or Tahiti), transit passengers have to clear immigration and TSA (Transportation Security Administration) in a dedicated room right next to the gate, which makes for easy identification and flow. The process takes less than 30 minutes, hence why Air Tahiti Nui has a stop-over in LAX of less than 2 hours on the way from Paris to Tahiti. Carry-one luggage has to be taken with you during the transit, while checked luggage stays on the plane.

The Business Class cabin onboard the Tahitian Dreamliner features 30 Rockwell Collins Diamond flatbed seats. These seats are configured in five rows on a six-abreast (2-2-2) arrangement. Air Tahiti Nui choose for a 2-2-2 layout in the premium cabin of its new Boeing 787s since most of the airline’s Business Class travelers are couples on their honeymoons or wedding anniversaries.  Unfortunately, this also means that passengers seated in a window seat will not have direct aisle access, which can be rather uncomfortable when you are not traveling with a partner.

All seats face forward, with the seats on the side slightly angled towards the windows, away from the aisle. Paired seats are staggered by a couple of inches (cm); together with a small partition, this creates some privacy in case you are seated next to a stranger (although the seats and cabin are very open) and at the same time allows enough interaction when you are traveling with a companion.

The Business Class cabin features a wonderful, refreshing and exotic design, inspired by the spectacular beauty of the islands of Tahiti. The seat’s marine blue fabrics and soft wooden finishes reflect French Polynesia’s natural elements and create a bright color palette that evokes the white sand beaches and turquoise water of the Polynesian lagoons. A Tiare motif is printed in the leather headrests of each seat, subtly reinforcing the visual brand image of Air Tahiti Nui. The wall on the back of the cabin is also adorned by a colorful painting of Polynesian women, which looks like a reprint of a painting of Paul Gaugain, the famous post-impressist artist who fell in love with French Polynesia.

The Tahitian Dreamliner’s Business Class layout is the same one which you also find on other airlines, such as KLM’s A330s, Qatar Airlines’ A330s, and Ethiopian Airlines B787s.

Air Tahiti Nui’s Business Class seat is pleasant, although it doesn’t offer much privacy and the comfort of the flat-bed will largely depend on the seat that you choose (more on that below). The soft cushioned seat has a pitch of 78 inches (195 cm), which is defined as the space between one point on a seat and the same point on the seat in front of it. The seat width is 21 inches (53 cm) – defined as the space between the arm rests – which is comfortable but not among the widest in the industry.

Each seat features its own 16 inch HD touchscreen TV, which can also be controlled by a handset nestled in the armrest. Below the TV monitor is a drawer (which is large enough to store a laptop) and a footrest (which becomes part of the flatbed once the seat is fully reclined). The size of this footrest is variable: the bulkhead seats in row 1 offer a much larger ottoman as compared to the other Business Class seats (so make sure to choose a seat in the first row if you can); also, the aisle seats have a larger foot rest compared to window seats.

The center armrest – which is shared between paired seats – features a small shared table (for drinks & snacks), a control panel for the seat positions, and a remote handset for the inflight entertainment system. It also holds a moderately sized fold-out tray table. Next to the seat, behind the headrest, is a small, somewhat difficult to reach storage compartment with a magnetic adaptor for the headphones. Each seat is also equipped with a standard universal power outlet and two USB ports

The seat goes fully flat (180 degrees recline), but your sleep comfort might depend on the seat you choose: except for the bulkhead seats in row 1 (which come with large ottomans), the footrests are rather narrow and this may somewhat hamper a good night’s rest.

What are the best Business Class seats

What are the worst Business Class seats

Click here for a seat map of the Tahitian Dreamliner.

On this flight, a three course lunch (after takeoff) and light dinner (prior to landing) were served. The (late) lunch service started with nice touch: the crew handed out white Taire flowers (the emblematic flower of the islands of Tahiti), followed by a welcome drink, a hot towel, and a delicious amuse bouche of smoked salmon blinis. I choose the following selection from the menu (there was a choice of three main courses):

All dishes tasted excellent and the food was beautifully presented.

Ninety minutes prior to landing, while approaching the French Polynesian archipelago, a light dinner was offered:

Each Business Class seat is equipped with an interactive touchscreen which offers superior HD resolution. The inflight entertainment features the latest generation system from Panasonic, and offers a decent (albeit rather limited) selection of entertainment, with 16 movies, 40 music albums, 15 video games and several dedicated TV shows & documentaries channel. A highlight of the inflight entertainment is Tiare TV, a unique channel devoted to the islands of French Polynesia. Among others, Tiara TV features a documentary about The Brando, one of the world’s most exclusive private island resorts and former home of the late actor Marlon Brando.

Air Tahiti Nui offers highspeed Wi-Fi on their 787s. Business Class passengers get a voucher with 10MB of free data (one per flight leg), which doesn’t exactly last a long time. After these date are used, one of the following packages can be selected:

# CREW: The service on this flight was both attentive and unassuming (and very similar to the service I enjoyed on the Paris to Los Angeles leg). The cabin crew did whatever it took to make passengers feel relaxed, comfortable and satisfied. They also changed from sleek city uniforms to elegant and comfortable Tahitian attire shortly after take-off. The crew’s colorful dresses and shirts reflected the charm, beauty and warmth that are typical of the French Polynesian islands. The pilot even introduced herself in person to the Business Class passengers during boarding (a much appreciated gesture).

# LAVATORY: There are three lavatories for the 30 Business Class passengers. One is located behind the cockpit and two are located in the galley between the Business and Premium Economy Class cabin. Calming Tahitian music is played inside the lavatories.

7 of the best adventure destinations in the US

My Big Updates from a Year of Change

7 of the best adventure destinations in the US