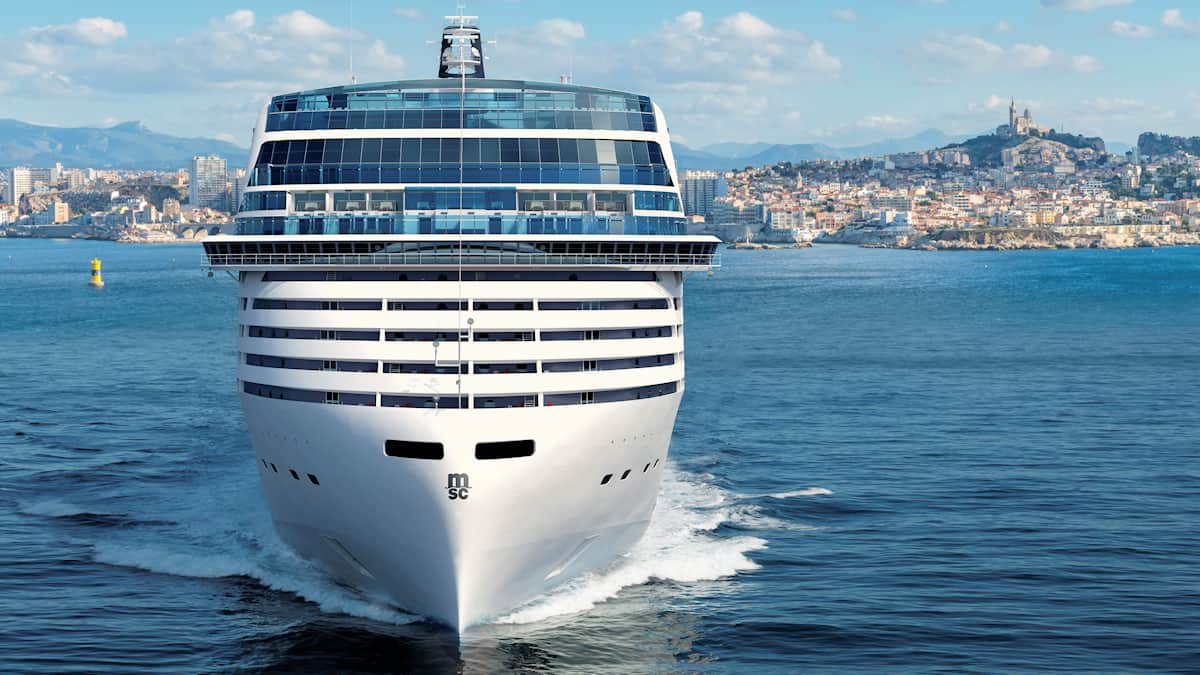 As the largest ship in MSC Cruises’ fleet, the 6,762-passenger MSC World Europa will be one of the biggest cruise ships in the world and the largest LNG-powered cruise ship worldwide.

MSC Cruise’s first-ever cruise ship powered by liquefied natural gas (LNG), the 215,863-gross-ton MSC World Europa has begun sailing to Doha, the capital and largest city in Qatar, in preparation for her naming ceremony on November 13.

After the 6,762-passenger ship was handed over to the cruise line during a ceremony at the shipyard in St. Nazaire, Chantiers de l’Atlantique on October 24, the next step for MSC World Europa will be officially receiving its name.

The new ship will travel through the Mediterranean Sea before arriving for this celebratory event at the Doha Grand Cruise Terminal in Qatar.

After the naming ceremony, which is sure to be a spectacular event with special guests and maritime traditions, and before the new ship sails on her first cruise with guests, MSC World Europa will assist in housing guests during the upcoming FIFA Soccer World Cup in Qatar, per MSC’s deal with the Qatari government in 2019 to provide two, now three, ships as floating hotels.

Alongside MSC Poesia and MSC Opera, MSC World Europa will host fans during the World Cup as the tournament begins just next month, on Sunday, November 20.

Two days after the final game of the World Cup, the ship will sail her maiden voyage to the Persian Gulf, including Doha, Dubai, Abu Dhabi, Sir Bani Yas Island, and Dammam as ports of call. The ship will remain in the Persian Gulf through the winter season before repositioning to the Mediterranean in March 2023.

The 22-deck World-class ship’s construction began on October 31, 2019, two years ago to date, and has since become the line’s new standard-setting ship and the largest in the fleet.

As the first in the new and innovative World Class, MSC World Europa will be joined by three sister ships in 2024, 2025, and 2027; the second World-class vessel will be named MSC World America, dedicated to serving in the North American market. The construction of MSC World America began just one week ago as the first steel was cut for the vessel.

The remaining two sister ships have not yet been named.

Debuting this December, the ship will host seven new dining experiences onboard, from casual eateries to gourmet options, including the Luna Park Pizza & Burger, totaling 33 different restaurants onboard.

The theater will see innovative changes from previous entertainment, with LED visuals, an E-Bike Stunt Wheel, Broadway classic show tunes, and even a circus.

MSC World Europa will have the fleet’s largest waterpark with VR technology, as well as other exciting activities like roller disco, bumper cars, and the largest dry slide at sea, the Venom Drop @ The Spiral which will span 11 decks.

On December 20, 2022, MSC World Europa will set sail on its maiden voyage on a special four-night sailing from Doha to Dubai, disembarking on December 24.

What You Need to Know • We Blog The World

CJRB Pyrite Review: The Best Knife in the World Under $50

What You Need to Know • We Blog The World