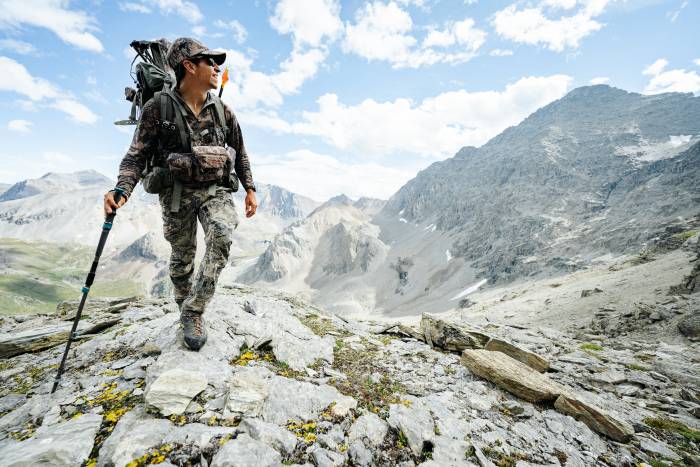 Mountain goats live in remote, rocky terrain, and finding them is only half of the hunt. To arrow one requires patience, endurance, and well-honed hunting skills.

Adam Foss is a Mathews team shooter, avid hunter, and storyteller. We caught up with him between hunts this fall to look back on his first year with the V3X bow. Foss spent the last year hunting with the V3X in all manner of conditions. We focused on the mountain hunting he’s known for, which also happens to be a tough proving ground for a hunting bow.

Backcountry bowhunting in this steep, remote terrain also means backpack hunting. For hunts like these, Foss spends 3 days hiking in, hunting for 6 days, and hiking out for another 3 days. Ideally, the last 3 days of hiking include the added weight of the game.

Check Out the V3X Bow

Adam Foss is a veteran bowhunter with an emphasis on mountain bowhunting. He’s chased wildlife all over the world and has made a career out of telling those stories. As half of Foss Media, he shares his stories, photos, and videos about his varied outdoor experiences in several publications.

Foss is also a Mathews ambassador, which is how we came to talk to him about his pursuit of a mountain goat in the sparse and steep terrain of British Columbia last year.

The V3X is the latest flagship hunting bow from Mathews Archery.

Foss praised the bow’s smaller, slimmer build for maneuvering in the backcountry. Last year’s wet spring and summer filled the lowlands with willows to trudge through.

Mathews designed the V3X with accessories in mind. The bow debuted the brand’s new cams, low-profile sights, and an in-the-field repair system.

Then there’s the Bridge-Lock Sight Technology, which Foss praised. “With Bridge-Lock, putting the sight in the riser, you’re shrinking the bow axle to axle as well as laterally,” he said. “It also balances really well because you don’t have a sight hanging off the right side of the bow. It’s all in line.”

Mountain goats are among the most durable animals in North America, and Foss gained confidence in the V3X to precisely deliver an arrow with an effective amount of kinetic energy.

“When I draw back my V3X, I’m thinking about aiming and then pulling through the shot — if I can do my job, the bow is more than capable of holding up its end of the bargain,” he said.

Foss said his hunts in British Columbia generally involve hiking through willows and undergrowth until he reaches alpine altitudes. Furthermore, there are stream crossings that require taking off a pack and hucking gear over the water.

He dragged the V3X bow through all that cover, and it made him appreciate its compact design. “If your bow falls apart out there, your hunt’s over,” he said.

Foss often “pre-hunts” to find vantage points and potential camps, and he follows that plan rather than hiking and second-guessing locations during a hunt. Goats aren’t as elusive as other mountain game, but they tend to live in hard-to-reach areas.

“Typically, I look for what I’d consider prime mountain goat habitat: cliffy perches and benches that are adjacent to some sort of grass to feed on. Surprisingly, they don’t really need much to feed on and can eke out a living on complete rock,” Foss said.

Once he spots a goat, he scans the terrain to assess whether it will allow him to stalk into archery range and be able to safely pack it out. Sometimes, that means taking a pass and watching the goat through glasses for a bit before moving on to find a new target.

“Mountain goats have a confidence about them, perhaps because they believe they are unreachable by predators who will often look for an easier meal,” Foss explained.

“They are much easier to spot in the summer months than sheep because of their white coats and blocky frames. However, when it snows, they are trickier to see — though snow allows the hunter to see tracks.”

Once Foss finds a target he can reach and retrieve, he settles into observation mode. He tries to figure out the goat’s routine. When does it bed down? How long does it feed?

“I find the older the goat, the more likely they are to have a smaller daily home range — though they are often wiser and perched in no-fall zones,” he said.

From there, Foss aims to wait for his target to bed down for the day in the late morning or midday before he moves in. This is usually its longest resting period before the longer evening feed.

“Of course, this is all in theory, and a change in the goat’s demeanor, sense of being stalked, or weather can disrupt his patterns,” Foss explained. “Goats sometimes have a sixth sense about them and just decide to move up the mountain for no apparent reason.”

Foss said it took about a day and a half to pack out the goat back and return to the bush flight pickup location.

All told, they were out for 9 days and only saw the sun once in the middle of the hunt. The weather was unseasonably windy and rainy, with some fog mixed in. Foss said it finally stopped raining on the last night of the pack-out — and only after they got below treeline to set up camp, start a fire, and have a meal with a view.

“With freshly roasted tenderloins in our bellies, we craned our necks skyward to watch the dancing Northern Lights,” Foss said. “We are lucky to find ourselves in these adventurous circumstances — the best part about bowhunting.”

Call it a hunter’s paradox, but when it’s all said and done, the heft of a pack filled with fresh meat makes the walk out easier.

These remote mountain hunts are a Foss family favorite. There are a lot more variables, a lot fewer hunters, and little room for error. That includes the bow, and after a year of abuse, Foss is still chasing game with his V3X.

This article is sponsored by Mathews Archery. Explore the V3X and other hunting bows on the brand’s website.

Mathews says its new bow platform will give hunters increased stability in a more compact frame than previous models. We talked with its designer to find out how and, more importantly, why. Read more…

Follow these tips from Mathews Archery to prepare your bow and yourself for a successful bowhunting season. Read more…

12 Must-Visit Destinations in Mexico for a Winter Vacation

What It’s Like Living in the Thor Freedom Elite

What to wear in Iceland in the Summer

12 Must-Visit Destinations in Mexico for a Winter Vacation

What It’s Like Living in the Thor Freedom Elite