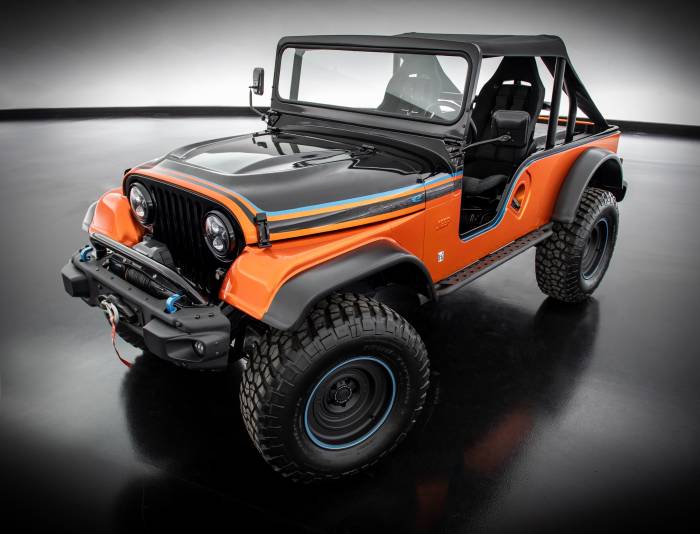 The Jeep CJ Surge concept is a look into the future of the classic. Jeep is calling it an ‘electromod’ — a vehicle that has been restored and updated with an electric driveline.

Jeep follows up two Magneto EV concepts by turning a vintage CJ into an electric off-roader. The Jeep CV Surge is a preview of the future of electric conversions. It’s also a chance for Mopar designers and engineers to learn more about building electric crate motor conversion kits.

The company’s plan is to see half of its sales be electric vehicles within the next 3 years. With that in mind, it’s not much of a surprise that Jeep and parts brand Mopar are working on a way to help make old Jeeps electric as well.

Jeep started with a classic CJ model. That’s the designation it used for round-light Jeeps from the first civilian models in 1944 through to the introduction of the square-lamp YJ Jeep Wrangler in 1986. But beyond the electric modifications, this is far from a stock Jeep CJ.

Jeep cropped the windshield by 2 inches to give the CJ Surge a lower look. Then Mopar added copper paint with gloss black accents and painted the concept Mopar hood and the grille in a shiny black finish. Surf Blue pinstriping and lettering sets off the hood and the door openings.

Black Rhino built the 18×9-inch wheels. They’re painted matte black with a surf blue pinstripe in the same Surf Blue Jeep uses to show off its 4xe models. The custom wheels wear 35-inch BFGoodrich all-terrain tires, and the CJ Surge has the 2-inch lift that seems to be mandatory for any Jeep concept.

Electric power comes from a completely custom setup from Jeep and Mopar. Mounted under the hood is a 200kW — 268-horsepower — electric drive motor. The 400-volt electrical system uses 24 lithium-ion batteries packed into a module in the Jeep’s trunk. That battery pack is also scalable, so Jeep can add more or less power (and range) if the kit makes production, to let it fit different needs and budgets.

Jeep put a two-speed transfer case behind the electric motor, so the CJ Surge has both high- and low-range gearing and drive at all four tires.

Although 268 horsepower doesn’t sound like a lot, a Jeep CJ didn’t have a lot of ponies when it left the factory. The biggest engine offered back then was a 304-cubic-inch (5.0L) AMC V8 that made 210 horsepower when it launched in 1970. The engine then dropped to just 125 horsepower by 1980, making this electric option a big upgrade for any CJ owner.

Jeep did beef up the driveline, installing Dana 44 axles front and rear. The axles come straight from the Jeep Performance Parts catalog. They’re already offered as a crate kit for anyone looking to beef up their Jeep.

Jeep Performance Catalog Gets Bolted On

A Warn winch — also from the JPP catalog — is installed on a JPP bumper. Like many of the parts used, it is a JK Wrangler part. The bumper gets modified to fit and wears surf blue tow hooks and amber fog lights.

Jeep also bolted on JPP Rubicon skid plates and bumper plates, along with concept rock rails. Those rock rails could end up in the Jeep parts catalog down the road.

Jeep didn’t forget about the cabin, either. It stuffed a center console originally destined for a JK Wrangler between the two custom seats that sit high on concept seat risers. Those custom seats wear black cloth with houndstooth inserts and surf blue stitching. Jeep also put a rotary controller on the new console to change gears and installed a charge indicator so you know how much battery is left.

Finishing off the CJ Surge concept is a custom-built roll cage with a bikini-style top to keep you out of the sun. Additionally, there are a set of Mopar all-weather floor mats, because Mopar puts those in every concept it touches.

The Jeep CJ Surge concept makes its debut at the 2022 SEMA show in Las Vegas this week.

What’s It Like Behind the Wheel of Jeep’s EJS Concepts? We Have the Answers

What to See and Expect for SM Supermalls’ Happy Christmas

What to See and Expect for SM Supermalls’ Happy Christmas