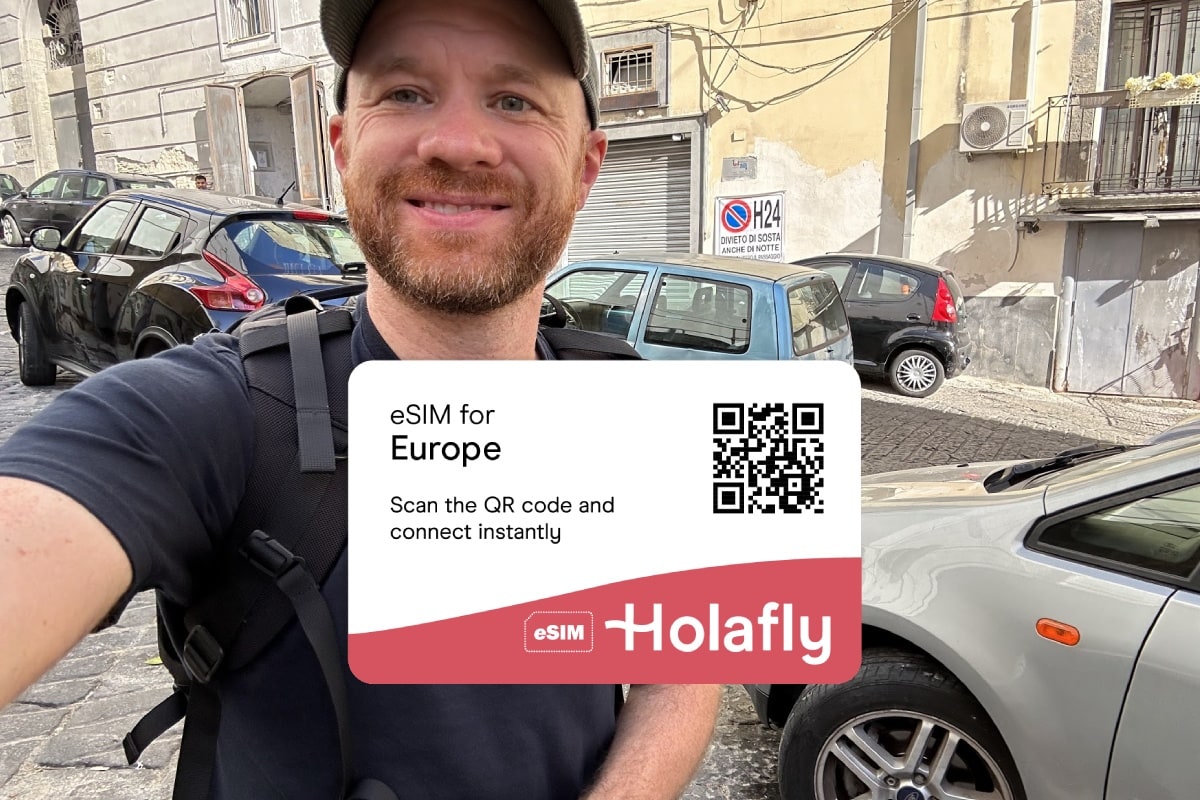 Holafly is a new startup eSIM data plan company based out of Spain and I thought their service looked interesting—especially since many of their data plans are unlimited and prices are affordable. But if you’ve ever used your phone abroad, there can often be quirks/glitches/issues when using any international data plan so that’s why I wanted to do a hands-on Holafly eSIM Review to see how they stacked up against other SIM/eSIM data plans I’ve used in Europe.

Are you just interested in seeing how Holafly performed when I used it in Italy? Click here to jump straight to the Holafly Real-World Performance section.

Save 5% on your order at Holafly with the code: THESAVVYBACKPACKER

How I Tested My Holafly eSIM & Why Trust Me

I’ve also written extensively about using data plans in Europe so check out The Savvy Backpacker’s Guide To Using Data Plans in Europe and How To Buy A SIM Card and Data Plan in Europe.

Ok, let’s dive into how Holafly works and things you might want to know before buying their service.

Holafly offers eSIM data plans for over 110 countries. Visit the Holafly website to see the full list of countries they cover.

Holafly offers a range of data packages that vary by country.

But other countries have packages with a set amount of data (i.e 6GB) for a set amount of time (typically 15 days). You’ll want to poke around the Holafly website to see the exact specifics of your destination’s data package options.

NOTE: I’m always a little skeptical about “unlimited” data plans because local providers might throttle data if the user starts consuming excess data. For example, your data might get slowed down if you stream lots of Netflix, etc.

What Mobile Networks Does Holafly Use?

Holafly isn’t a mobile provider—i.e they don’t own the mobile towers. Holafly simply partners with local providers and essentially rents bandwidth from those large companies. So, in Italy for example, you’re actually connected to the Wind Tre network (in France you connect to SFR, the US is AT&T, Germany is T-Mobile, etc.).

In most cases, you’ll get the exact same service and speeds as everyone else on the network but during heavy network usage, some users report slightly slower speeds (again, this varies by network).

Setting Up, Installing, and Activating Your Holafly Service

It’s important to not activate your Holafly eSIM until you’re at your destination.

That said, this process is a little confusing since you can install the eSIM while you’re home but then it’s kind of easy to accidentally activate the service while you’re setting everything up.

If in doubt, wait to install your Holifly eSIM until the morning of your flight—this way you won’t eat too much into your plan’s validity period if you do accidentally activate your plan too early.

So in this section, I’ll try my walk you through the process of installing the eSIM and then activating the service.

Installing and Activating Your Holafly eSIM

Once you purchase your Holafly data package you’ll get an email with a QR code (you can also type in a code if you can’t scan the QR code). You simply scan the QR code with your phone and it walks you through the activation process.

Your phone will prompt you to make a few setting changes and then your service is activated. It will automatically connect to the local provider.

It was surprisingly simple.

I was skeptical of Holafly before using their service (especially since they offer “unlimited data”) but I was extremely happy with Holafly’s performance. I mostly got 5G speeds but sometimes got LTE/4G speeds—I never noticed any data throttling.

My Google Maps/Google searches worked flawlessly, my iMessage never had any issues sending photos and videos, all my social media posts went through quickly, and my mobile data never had any issues. I will note that I never used Holafly for streaming large amounts of data so I can’t comment on how that might affect performance.

In short, my Holafly data worked flawlessly for the entire two weeks of my trip to Italy.

Naturally, I can’t comment on how Holafly works in other parts of the world but I’m confident that will work similarly throughout Europe and other developed nations.

One note: Holafly is a data-only plan so it doesn’t let you make calls—you’ll need a different plan if you need to make calls (or you can use WhatsApp).

Is Holafly A Good Deal and My Final Thoughts

I think Holafly is a great deal for travelers who want an affordable, no-hassle international data plan that gives great speeds for a very fair price. I was seriously expecting to have slow speeds (or at least some kind of issues) but everything worked super well.

My 15-day service was $47—which comes out to basically $3 a day (they have plan options that range from 5 days to 90 days). Most people’s domestic carriers will charge $10+/day for international service and data speeds are often still slow.

Save 5% on your order at Holafly with the code: THESAVVYBACKPACKER

The Savvy Backpacker is reader-supported. That means when you buy product/services through links on the site, I may earn an affiliate commission — it doesn’t cost you anything extra and it helps support the site.

Thanks For Reading! — James

Questions? Learn more about our Strict Advertising Policy and How To Support Us.

Cheapest Bars in Barcelona to Drink on a Budget

The future of vegan luxury travel in the Maldives

The future of vegan luxury travel in the Maldives