List of Basilica Churches in the Philippines (and Where to Find Them!) 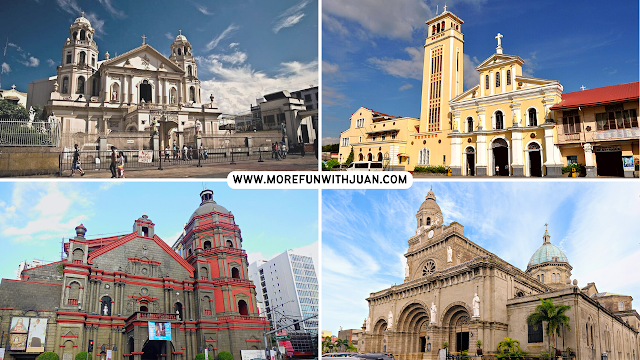 The Saint John the Baptist Basilica, also known as the Shrine of La Virgen Milagrosa de Badoc, is a Roman Catholic church in Badoc, in the northern Philippine province of Ilocos Norte.

The basilica houses the Virgin Milagrosa statue of the Virgin Mary. It is dedicated to John the Baptist and has the title of a minor basilica since 2018. It was built in the 17th century in the Baroque style.

Binondo Church, also known as the Minor Basilica and National Shrine of Saint Lorenzo Ruiz and formerly known as Our Lady of the Most Holy Rosary Parish, is located in the District of Binondo, Manila fronting Plaza San Lorenzo Ruiz, in the Philippines. This church was founded by Dominican priests in 1596 to serve their Chinese converts to Christianity.

The original building was destroyed in 1762 by British bombardment. A new granite church was completed on the same site in 1852 however it was greatly damaged during the Second World War, with only the western façade and the octagonal belfry surviving.

On February 13, 1945, the church was declared a minor basilica of the Immaculate Conception. The declaration was made upon the request of Lipa’s bishop, Alfredo Verzosa. On January 16, 2022, the Basilica was also declared as the Archdiocesan Shrine of Santo Niño de Batangan.

The Minor Basilica of Our Lady of the Rosary of Manaoag, located on top of a hill in the town, has been canonically affiliated with the Papal Basilica of Saint Mary Major in Rome since June 2011.

The parish encompassing Manaoag and the surrounding towns is administered by the Order of Preachers under the Roman Catholic Archdiocese of Lingayen-Dagupan. It was officially declared a Basilica in 2015.

Some of the miracles attributed to Our Lady of Manaoag are depicted in murals inside the church’s transepts and nave. The Paschal Chapel beside the south flank of the church has icons of the Black Nazarene similar to that of the Quiapo Church, the Santo Entierro (Dead Christ), and other statues of the Virgin Mary.

Declared as a basilica: February 2015

The Minor Basilica and Metropolitan Cathedral of the Immaculate Conception, also known as the Manila Cathedral (Spanish: Catedral de Manila), is the cathedral of Manila and basilica located in Intramuros, the historic walled city within today’s modern city of Manila, Philippines.

It is dedicated to the Immaculate Conception of the Blessed Virgin Mary as the Patroness of the country. The cathedral serves as the episcopal seat of the Archbishop of Manila. On April 27, 1981, Pope John Paul II issued papal bull Quod Ipsum designating the cathedral as a minor basilica by his own Motu Proprio.

The Roman Catholic church of Orani, declared as an independent parish on April 21, 1714, and also known as Our Lady of the Most Holy Rosary Parish Church (“Our Lady of the Rosary of Orani Church”, “Nuestra Señora del Rosario Parish Church”, “Simbahan ng Orani” or “Virgen Milagrosa Del Rosario del Pueblo de Orani Shrine”) is a Neoclassical (heritage) Diocesan Marian Shrine and Pilgrimage church located in the center of Orani, Bataan in the Philippines.

The historic bell of the church of the Parish of the beloved Nuestra Señora del Rosario was presented to the public and installed in front of the church on June 7, 1998. It is a symbol of the undying, truthful and timeless faith of the people of Orani to the Lord.

Basilica Minore of Our Lady of Charity

The basilica is under the leadership of parish priest Alfonso V. Lacsamana and parish vicar Liberato A. Apusen. It is situated along MacArthur Highway in Agoo, La Union in front of the Jose D. Aspiras Civic Center.

Basilica of Our Lady of Piat

The Basilica Minore of Our Lady of Piat is one of the Minor Basilicas in the Philippines.

It is located at Poblacion, Piat in the province of Cagayan. The shrine is dubbed as the Pilgrimage Center of Northeast Luzon, and a home to the centuries old brown Madonna, Our Lady of Piat.

The Peñafrancia Minor Basilica or the Minor Basilica of Our Lady of Peñafrancia is a Roman Catholic minor basilica located on the outskirts of Naga City — also known as the Pilgrim City and Queen City of Bicol — in the Bicol Region of the Philippines.

It is one of the largest Marian pilgrimage sites in Asia. The icon of Our Lady of Peñafrancia is enshrined in this sanctuary. Rev. Fr. Rodel Cajot is the present Rector of the Basilica, having been appointed in 2011. It is the only basilica in the Bicol Region and the Roman Catholic Archdiocese of Caceres.

The Minor Basilica of La Purísima Concepción, locally known as Santa Maria Church is a Roman Catholic Church located in the municipality of Santa Maria, in the province of Bulacan, Philippines. It is under the coat of arms and jurisdiction of the Roman Catholic Bishop of Malolos and Seat of the Episcopal Vicar of the Eastern District of the Diocese of Malolos. 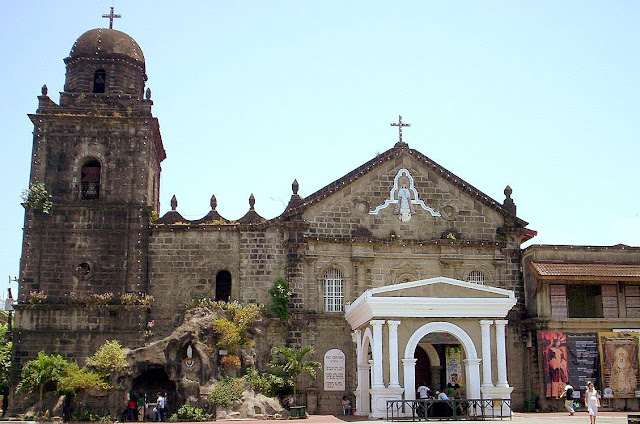 It was declared by Pope Francis on March 21, 2021 that the parish will be elevated into a Minor Basilica. On November 27, 2021, the church was formally declared as a Minor Basilica which was headed by Charles Brown, the apostolic nuncio to the Philippines.

The Minor Basilica of the Black Nazarene, known canonically as the Parish of Saint John the Baptist and also known as Quiapo Church, is a prominent basilica in the district of Quiapo in the city of Manila, Philippines.

The basilica is famous home for the Black Nazarene, a dark statue of Jesus Christ said to be miraculous. The basilica is under the jurisdiction of the Archdiocese of Manila and its current rector is Rev. Fr. Rufino C. Sescon, Jr.

The masses go to Quiapo Church in downtown Plaza Miranda and drop a visit to the Nuestro Señor Jesús Nazareno (a dark figure of Christ carved by a Mexican artist from black wood) whose image, reputedly miraculous, was brought to the country in a Spanish galleon in the 17th century. The Feast of the Black Nazarene on 9 January celebrates the traslación (solemn translation) of the statue to the church from the Church of Saint Nicholas Tolentino.

The Basílica Menor del Santo Niño de Cebú (Minor Basilica of the Holy Child of Cebú), commonly known as Santo Niño Basilica, is a basilica in Cebu City in the Philippines that was founded in 1565 by Fray Andrés de Urdaneta and Fray Diego de Herrera.

It is the oldest Roman Catholic church in the country, allegedly built on the spot where the image of the Santo Niño de Cebú was found during the expedition of Miguel López de Legazpi.

This image of the Child Jesus is the same presented by Ferdinand Magellan to the chief consort of Rajah Humabon on the occasion of their royal Baptism to Roman Catholicism on 14 April 1521. The image was found by a soldier named Juan de Camuz forty years later, preserved in a wooden box, after Legazpi had razed a local village.

When Pope Paul VI made the church a basilica in 1965, he declared it to be “the symbol of the birth and growth of Christianity in the Philippines.” The present building was completed from 1739–1740, and was designated by the Holy See as the “Mother and Head of all Churches in the Philippines”.

It is one of the oldest churches in the country having founded in 1590. The church is dedicated to its founder Padre Pedro Bautista (Peter Baptist), a Spanish missionary from Ávila, Spain, one of the 26 Christians martyred in Japan in 1597.

It is dedicated to Saint Nicholas of Tolentino and is under the administration of the Archdiocese of Nueva Segovia. In May 2021, it was announced that it was granted the title of minor basilica, the 19th in the Philippines and the first in its archdiocese.

The Taal Basilica, canonically known as the Minor Basilica of Saint Martin of Tours, is a minor basilica in the town of Taal, Batangas, in the Philippines, within the Archdiocese of Lipa.

It is considered to be the largest church in the Philippines and in Asia, standing 88.6 meters (291 ft) long and 48 meters (157 ft) wide. Martin of Tours is the patron saint of Taal, whose fiesta is celebrated every November 11.

The Saint Anne Parish Church, also known as Santa Ana Church or also known in its formal name as the Minor Basilica and Archdiocesan Shrine of St. Anne, is a Catholic church and minor basilica located in Barangay Santa Ana, Taguig.

The church is the largest in the province of Quezon; and is built in the shape of a key. Locals often refer to the church as Susi ng Tayabas (“The Key of Tayabas”). The church’s 103-metre (338-foot) aisle also has the longest nave among Spanish colonial era churches in the Philippines.

This Exclusive Guesthouse in Cainta is Ideal for Short Staycations

The best things to do in Tampa with kids

See Why the Cluny is a Must-Visit Museum in Paris

The best things to do in Tampa with kids