Pulling off successful recoveries – Ontario OUT of DOORS 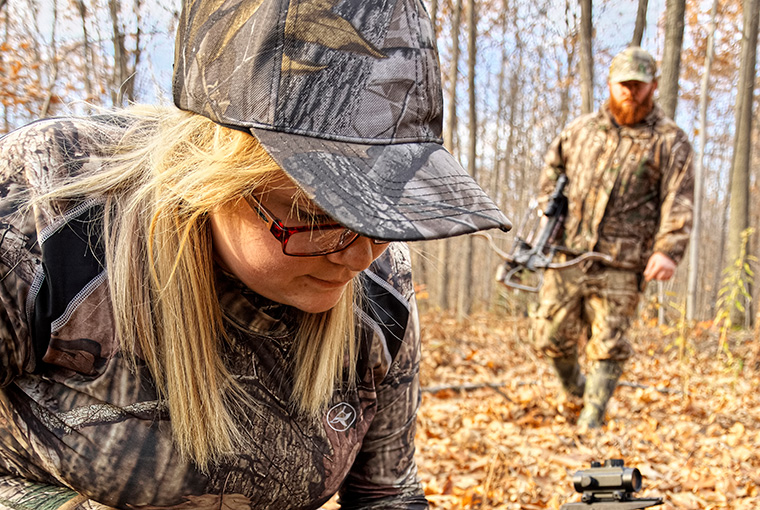 The bear appeared without a sound, meandering down a trail towards a corn field. I slipped off the safety on my crossbow before putting the red dot on the bears’ firebox and letting the bolt fly. There was a thwack as it found its target. The bear immediately charged into the bush 50 feet away. Everything happened quickly, but I made a mental note of where the bear disappeared.

On the ground, there was some hair, but no blood. I reloaded the crossbow and carefully walked in the direction I’d seen the bear run. My heart sank a bit as I could not see any blood. Had I made a shoulder shot?

As I walked towards where I believed the bear went out of sight, I stopped and looked back at the tree stand. This was certainly the spot it disappeared. I attached some flagging tape at eye level. Now I had to look extra carefully for blood.

I went down on my knees and scanned the vegetation. Any sign of a shine or red on the green leaves could be a blood drop. All I needed was a starting point. A few feet in, I found a single, small blood splatter. Another piece of flagging tape was added. Still crouching, and moving slowly, my eyes scanned forward for my sign. Ahead a couple of paces, but off the trail, was a tiny blood smear on a branch.

The bear had veered right. A few more small drops were found, now well off the trail. Then, I saw the bear. Dead, it had stopped in a depression near an overturned tree. The bear was not visible from the trail, and I’d never have found it without doing some careful tracking. This required some serious effort.

If you have hunted for a few seasons, you have almost certainly been in a situation where you had to follow a blood trail. Some situations can be very demanding and require not only patience, but forethought. The process of completing a successful recovery is also greatly increased with a few basic tools and techniques.

After the shot is taken, it is always wise to take time to sit and think. I’d say a minimum of half an hour unless the animal is visibly down. Even then, take your time. Downed animals need to be given time.

In most situations, I will wait an hour before I leave the stand or shooting position. Not only does stopping to take a moment allow the adrenaline to subside, but you can replay the shot in your mind.

How did the animal react? Did it make any movements or sound that might indicate how well it was hit? Which direction did the animal go and where did you lose track of it? Any piece of information can be useful. Some hunters take pictures of where an animal ran into the woods and make note of trees or other visible clues. If a shot has been taken, always assume the animal is hit. Every effort should be made to find sign.

Shots taken at an animal standing in open cutovers are especially problematic, especially at long distances. Cuts can look much the same and it is especially difficult when there are leaf-covered shrubs all over. Look for a birch snag, large rock, tree stump or any identifier that can help you go to where the animal was standing. If you own one, a range finder will give you the rough distance the animal was standing at.

Leave a blaze marker at your stand. It might be a blaze toque or flagging tape. Marking where the shot came from can help you get your bearings.

At the spot where the animal was shot at, look for hair, blood, bone, and animal tracks. Often — but not always — animals that don’t drop when shot, will kick, and run. Finding tracks and direction is critical information. Always walk beside a track and never on it.

You won’t always find blood right away. Sometimes you won’t find blood at all. Hit animals can bleed for a while and stop. Or they will bleed after a time or not bleed at all. There are situations where you will only have tracks to follow. One good trick when you are following tracks in sand, mud or snow is to carry a small stick as you go along. If you lose the trail, mark the last track in the sand with an X.

Then it is easily found again if you need to start looking around for the trail. A stick pointed at the tracks as you go can help with concentration. Look up and around as you go. Sometimes an animal may be bedded down and if you don’t see it get up, you won’t have chance to dispatch it before it runs off again.

If you have blood, you have an excellent chance of retrieving the animal. While finding blood is a positive sign, it can still provide a tracking challenge. Blood on green vegetation usually sticks out well, but in the fall, a lot of leaves turn orange and red. This can make it tricky to see blood drops. Using flagging tape to mark blood helps you keep track of the sign.

Another option is to use toilet paper. It is bright white, biodegradable, and will disappear with the first rain. It doesn’t work as well in snow. Blaze orange toilet paper is an alternative. Yes, this product exists.

When it starts getting dark, blood is even more tricky to follow. There are blood tracking lights that look like flashlights. These use a filter that dims leaves and brush and helps enhance the visibility of blood. Some feature red and blue light. Blue is generally best for finding blood against the greenish browns of woods. A bright, quality LED flashlight or even an old-school gas lantern work well.

Shot follow-up and game tracking are critical skills for all hunters to learn. It is our oath as hunters to ensure every effort has been made to retrieve the game we pursue and harvest.

Gord Ellis is a Senior Editor, journalist, radio broadcaster, photographer, and professional angler based in Thunder Bay.
Reach Gord at: mail@oodmag.com and @GordEllis on Twitter.

Originally published in the 2021-2022 Hunting Annual issue of Ontario OUT of DOORS Magazine.