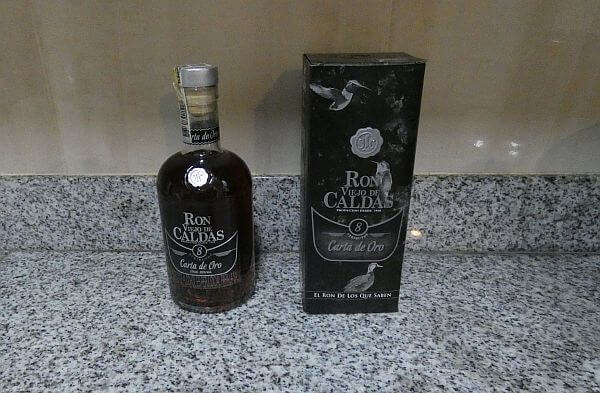 The Colombians drink a lot of rum, but what they produce doesn’t have a lot of recognition in the international market. I’m in the country right now and wanted to try something good, so I asked around a lot and kept getting the same answer from people who drink the spirit neat: Ron Viejo de Caldas.

The real “special occasion” version you can get is the 15-year version, but it wasn’t available at the supermarket where I was shopping and I didn’t want to go on a hunting trip in hilly El Poblado, so I bought the 8-year version instead for some sipping at my leisure.

The first impression was good: a black box with silver lettering that features a variety of birds found in Colombia, including one that happened to be chirping outside my balcony as I was writing this. On one side are facts about the rum company, established in 1928. For instance:

– They age the rum in new Colombian white oak barrels (not ones that have held other liquor).

– The aging takes place at more than 2,800 meters in altitude.

The bottle itself is a lot more attractive than the photos I’ve seen online, so they’ve clearly done a design update in the last few years. My bottle was a somewhat heavy manufactured clear glass one with a seam down both sides, with an indentation in the front for the company seal logo and another logo in glass on the bottom of the bottle.

The top was metal with an artificial cork stopper. The front and back labels were clear plastic stick-ons. So okay, not a gift bottle that’s going to wow anyone, but not nearly as dated looking as the old design.

Sometimes a bottle that isn’t overly fancy is a good sign because what really matters is what’s inside and the fancier the bottle, the higher the production costs. The medium-dark, copper-colored rum looks good in the glass.

At this point I can usually tell with the first whiff whether I’m going to be drinking a high-quality rum or not and this 8-year version certainly gave the right signals. The nose is complex and balanced, sweet and comforting and not too alcoholic. The fact that it is bottled at 35% alcohol probably helps, but it definitely invites you to take a sip and savor.

That first taste was not jolting at all and as with most great spirits, it got more interesting as it moved across the taste buds. This is not a rum that hits you like a punch right away like the 7-year Flor de Cana, nor is it one like Centenario from Costa Rica that gives an experience like drinking liquid caramel. There are a lot of different notes working in harmony here and it takes some time to dissect the hints of different flavors coming out in the rum as it opens up in the glass. 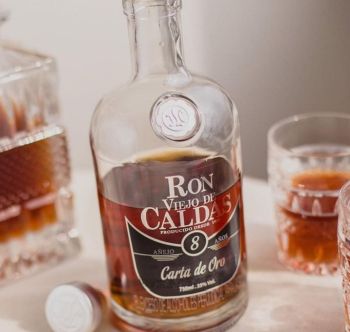 Although this 8-year rum has won a few international awards, some serious rum drinkers seem to think it’s too smooth, not hefty enough for them. If that’s you, then you might be happier with something made at sea level like the Caribbean or Nicaraguan rums. Or maybe the 15-year version of this, which is obviously going to have much heavier oak flavors.

If your tastes are more subtle and you like a smooth sipper, however, you’ll probably enjoy the 8-year version of Ron Viejo de Caldas. And at this price, it wouldn’t be a crime to make a nice cocktail with it: you can get a 750-ml bottle of it in Colombia for around $15 and in USA stores it is usually not much more, in the range of $17 to $20 and bottled at 37.5%.

Besides, while some complain that this rum isn’t manly enough for them, I haven’t heard it described with more derogatory terms and I can’t say the same for the other heavily marketed rum from this country: Ron Medellin. If you’re trying to choose from one of these two at the airport duty-free store on the way home, go for the Caldas and you’ll be glad you did.

Ron Viejo de Caldas is based in Manizales, which is part of the Coffee Triangle region, so I guess the area can get you going in the morning and wind you down in the evening. See more about the company here.

Timothy Scott is the founder and editor of Luxury Latin America and has been covering the region as a travel journalist since the mid-2000s. He has visited each country we cover multiple times and is based in a UNESCO World Heritage city in central Mexico, where he owns a home. See contact information here.

How to Up Your Bike Touring Food Game