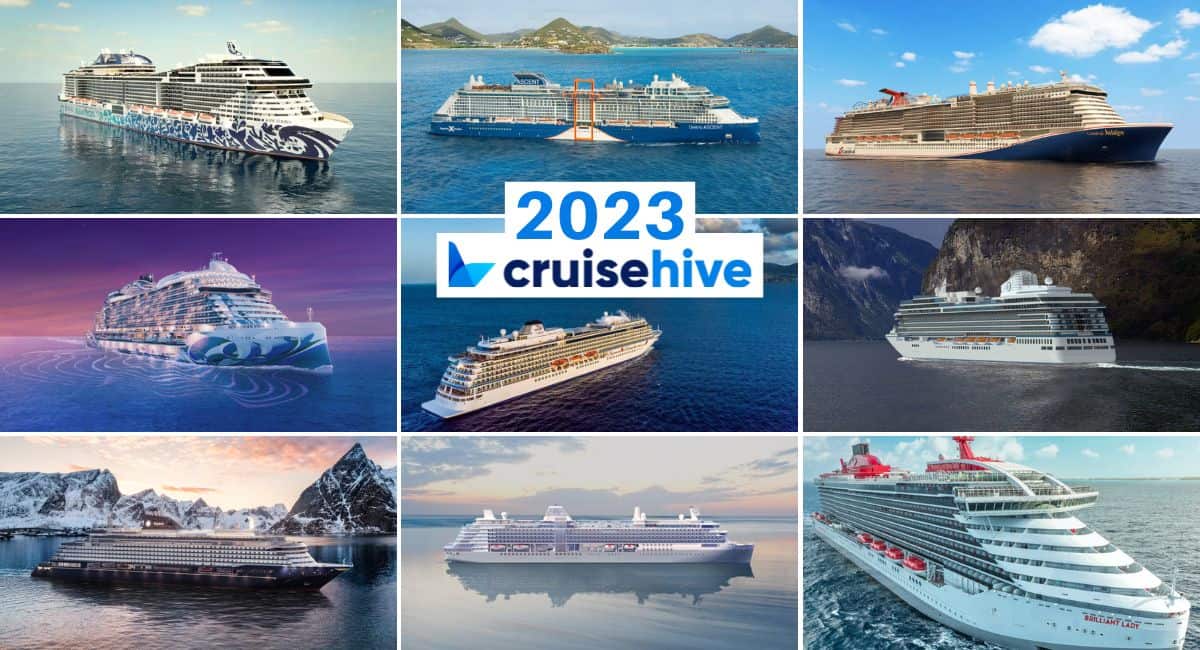 If you’re a frequent cruiser, chances are likely that you keep a close eye on all the new cruise ships set to hit the high seas in the coming years. After all, you want to be one of the first of your traveling friends to check out all the latest and greatest in cruising, as soon as it’s available to the public.

So, if you’re in the process of planning out your cruising itineraries for 2023, here are the new cruise ships you’ll want to check out.

There’s a lot to look forward to in 2023, with new cruise ships coming from all your favorite cruise lines, from Virgin to Viking, Celebrity to Carnival.

An adults-only ship and the ninth cruise ship for Viking Cruises, Viking Saturn is an ocean ship, but is small enough that it can dock at ports where larger cruise ships just can’t.

The ship will offer all-balcony staterooms across five categories, two pools, a handful of dining venues and a handful of entertainment venues.

If you’re considering traveling on a Viking ship for the first time, when Viking Saturn debuts, it’s worth noting that the cruise line is definitely a more refined one, with a thoroughly adult vibe. Don’t expect a lot of rowdy pool parties here. Instead, everything is tasteful, luxurious and Scandinavian-inspired.

At just 67,000 gross tons and a guest capacity of only 1,200, there’s no denying that Oceania’s Vista is small. However, what the small, new cruise ship lacks in size, it makes up for in style. If you’re looking for a more intimate cruising experience, with fewer crowds and more peace and quiet, you’ll find it here.

Compared to past Oceania ships, Vista offers new dining options, such as Ember and Aquamar Kitchen. In terms of accommodations, expect all-veranda options, and staterooms and suites with oversized rainforest showers.

For the first time ever for Oceania, the ship will offer a new category of concierge-level staterooms that are designed with solo travelers in mind. Dramatic new “Signature Spaces” offer carefully designed rooms with the idea that there’s a space on the ship for every mood and every purpose.

Virgin Voyages has not one but two new cruise ships coming out in 2023. Resilient Lady appears in May 2023, when it’s expected that the cruise ship will take its inaugural sailing from Greece.

Just like all four of the Virgin Voyages ships, Resilient Lady will offer the adults-only environment infused with fitness, music and party-esque amenities that the cruise line is known for.

Expect the same restaurants that you’ve seen on other Virgin ships, including a range of international restaurants and none of the main dining rooms or buffets you’re used to on traditional cruise ships.

There will be more than 1,400 cabins and most will offer ocean views and nearly 90% will offer balconies. Solo cabins are available, as well as beds that reconfigure into a sofa for better use and more space on sea days.

Designed with the yachting lifestyle in mind, Explora I offers just over 450 balcony suites, with each boasting 377 square feet of space. The crew to passenger ratio is 1.25 to 1.

Other planned features include more than 27,000 square feet of outdoor deck space, four pools and nine restaurants. Like many of the cruise ships we’re looking forward to in 2023, Explora I pays close attention to new cruising technology and eco-friendly designs.

MSC Euribia is the third of MSC Cruises’ Meraviglia Plus class, following MSC Grandiose and MSC Virtuosa. The beautiful (and big!) ship is not just filled with gorgeous spots to take in the views, inside and out, but also is an example of how cruising can be at least a little more eco-friendly.

This new cruise ship features an LNG power system that reduces its greenhouse gas emissions by up to 20%. Its advanced onboard wastewater treatment system ensures that no water leaves the ship without undergoing strict treatments that reduce pollution and harm to local ecosystems. Smart energy efforts have also been applied to the ship’s waste elimination, climate control and ventilation.

But as for the fun stuff, MSC Euribia will offer five pools, one of the largest waterparks at sea, the longest LED dome at sea in the promenade, 10 restaurants and 21 bars.

Silversea’s new cruise ship, Silver Nova, is the first of the cruise line’s Nova class and, as such, comes with a lot of “firsts” for the line in general.

The ship will offer 75 GRT per passenger, making it one of the most spacious cruise ships in the world in terms of space afforded to each passenger.

Icon of the Seas (Royal Caribbean)

Royal Caribbean can always be relied upon to deliver new and exciting features when it announces its new cruise ships. Icon of the Seas does not deviate from this fact, as it kicks off the cruise line’s brand-new Icon class, with three other Icon-class ships slated to debut before 2030.

Originally, the Icon-class ships were expected to be bigger than Royal Caribbean’s Quantum-class ships, but smaller than its Oasis-class ships, with a gross tonnage of 200,000 and guest capacity of around 5,600.

However, in May 2022, the cruise line confirmed the Icon ships would actually be larger than the existing Oasis-class ships, which will put the gross tonnage at over 236,857 and the guest capacity at more than 6,988 people, making Icon of the Seas the largest cruise ship in the world.

More details about what we can expect on this mega-ship are expected to be released in fall 2022. Until then, construction in Finland progresses, and Royal Caribbean is taking viewers behind the scenes in a new video series.

The upcoming Norwegian Viva will be the sister ship to Norwegian Prima, and Norwegian Cruise Line has said that you can expect nearly identical experiences on both ships.

The only things that might change? A Norwegian Cruise Line spokesperson mentioned a potential switch up in a few of the restaurants and/or entertainment venues, but, otherwise, they’re sticking to what they’ve already proven to do well with Norwegian Prima.

The new Carnival Jubilee is named after the original MS Jubilee, a Carnival cruise ship that was launched in the 1980s. You’ll find that this new ship is a big step up from its predecessor, though, with lots to do and family fun everywhere you look.

Following a similar format to that found on sister ships Mardi Gras and Carnival Celebration, Carnival Jubilee will be split into six fun zones and will offer lots of new fun alongside Carnival classic venues and activities. While the cruise line hasn’t given us many peaks behind the curtain just yet, it promises that there’s a lot of fun yet to be announced.

The ship won’t be among the largest in the world when it debuts, but it will be Carnival’s largest to date, larger even than Mardi Gras, placing Carnival Jubilee just shy of the world’s current top 10 largest cruise ships.

This series of three ships that include Grandeur, Splendor and Explorer is known for a particularly high level of luxury. This can be most clearly seen in the new Grandeur Regent Suite, which offers 4,443 square feet, a sauna, steam room, spa room, capacity for six, 270-degree views, a balcony and a sunroom.

On Grandeur, you can also expect a redesigned main dining room that departs from what you may have seen on Regent’s recent ships.

Celebrity Ascent, the fourth ship in Celebrity’s Edge class, offers all of the luxuries that you likely already associated with the cruise line. For this particular ship, though, you can expect the widest range of staterooms and suites available on a singular cruise ship within the Celebrity line.

These will include the Retreat suites, the cruise line’s VIP, exclusive area that provides private spots for dining, relaxation and more, away from the cruising crowds. Ascent’s Retreat will include a two-level sundeck.

In addition to having a huge number of staterooms and suites to pick from, on this ship, you’ll also have a wide array of restaurants and bars to pick between, as you plan your itinerary.

Virgin Voyages is relatively new to the cruising game, but that doesn’t mean that the line is lacking in any way. The line’s unique, adults-only cruising experience is one you won’t find anywhere else, with its party-esque atmosphere alongside a high level of luxury.

The fourth ship from Virgin Voyages, Brilliant Lady will follow the same design as its predecessors. While not much has been announced regarding the ship thus far, you can expect a good array of restaurants (while the ship forgoes the traditional buffet and main dining rooms that are common on other cruise lines).

There will be many cabins with ocean views and balconies, large rock star-themed suites, lots of fitness offerings and basic fare packages that include extras like WiFi and a basic beverage.