Viking Kvasir Collides with Ship On the Rhine River Near Wesel, Germany 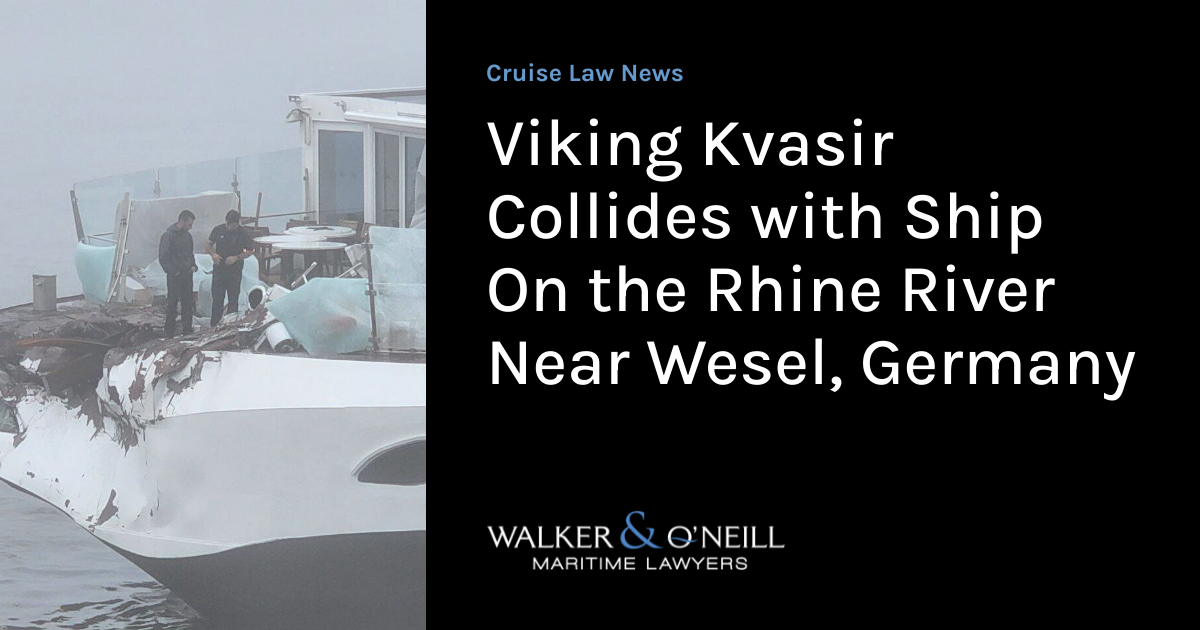 The Viking Kvasir collided with another ship this morning on the Rhine river near Wesel, Germany. The accident occured during the river cruise ships’s Antwerpen to Amsterdam low country cruise. A couple of passengers and several crew reportedly sustained minor injuries. We received the following information from a passengers on the ship who wishes to remain anonymous:

“The first officer was piloting the ship this morning in heavy fog and there was another barge/ship that was apparently sideways (you can see this from the photo taken from one of the balconies) on the Rhine that we hit.  It was at 6:50 a.m. this morning Wesel Germany time.  Most of the passengers were still in bed and we could feel the ship engines in full reverse for 3-5 seconds and then a massive crash and the sound of breaking glass in our room.

After things started to settle down, they held a shipwide meeting in the lounge and the Hotel Manager said it was the other ship’s fault, and the Viking ship has video proof of it.

Fortunately, injuries were minimal — except for the pride of the first officer . . . she was overcome with emotion and was applauded by all of the passengers for doing everything she could to minimize and avert the collision. There was very limited visibility and shortly after we collided, we saw the other ship perpendicular to our ship and then it disappeared into the fog.  One crew member was taken to a doctor for burns (the chefs were preparing breakfast service).  Others had minor cuts (mainly from picking up LOTS of broken glassware) including in the state rooms. A couple of passengers had minor injuries because they were standing when the ships collided.

The collision happened about a mile from Viking’s privately owned dock in Wesel.  Damage was above the waterline and no water was taken on.  They removed the tarp that covers the glass roof of the Aquavit terrace and have used it to cover up the damage (as in the earlier accidents this year shown on your site).

Breakfast and lunch services were cancelled. Not sure how much dishware is left. Morning excursions carried on and the ship is being resupplied as scheduled. It appears there is at least one Viking executive on the ship.  He wasn’t a member of the crew and was wearing a suit jacket with a Viking name tag.

There are a few police officers interviewing the First Officer right now, as well as someone from the port authority.  The captain and two land based technicians examining the extent of the damage.”

The last accident involving a Viking river cruise ship (the Viking Hermod) occurred in early July of this year.  There have been at least six accidents involving Viking river ships in the last six years, involving the Viking Aegir, Viking Sigyn, Viking Freya, Viking Idun, and an unidentified river cruise ship (some identified the ship as a Viking longship), as well as a couple of incidents involving river ships operated by other companies, including the M/S Swiss Crystal and Scylla Edelweiss. You can read a summary of these accidents here.

Have a comment or question? Please leave one below or join the discussion on our Facebook page.

Don’t look under the cover! @VikingCruises covers up the damage to the Viking Kvasir #cruise ship on the Rhine this morning: pic.twitter.com/sO2pkaYBCE

Gear Bargains: Save on Jackets, Survival Gear, Tents, and More

Gear Bargains: Save on Jackets, Survival Gear, Tents, and More