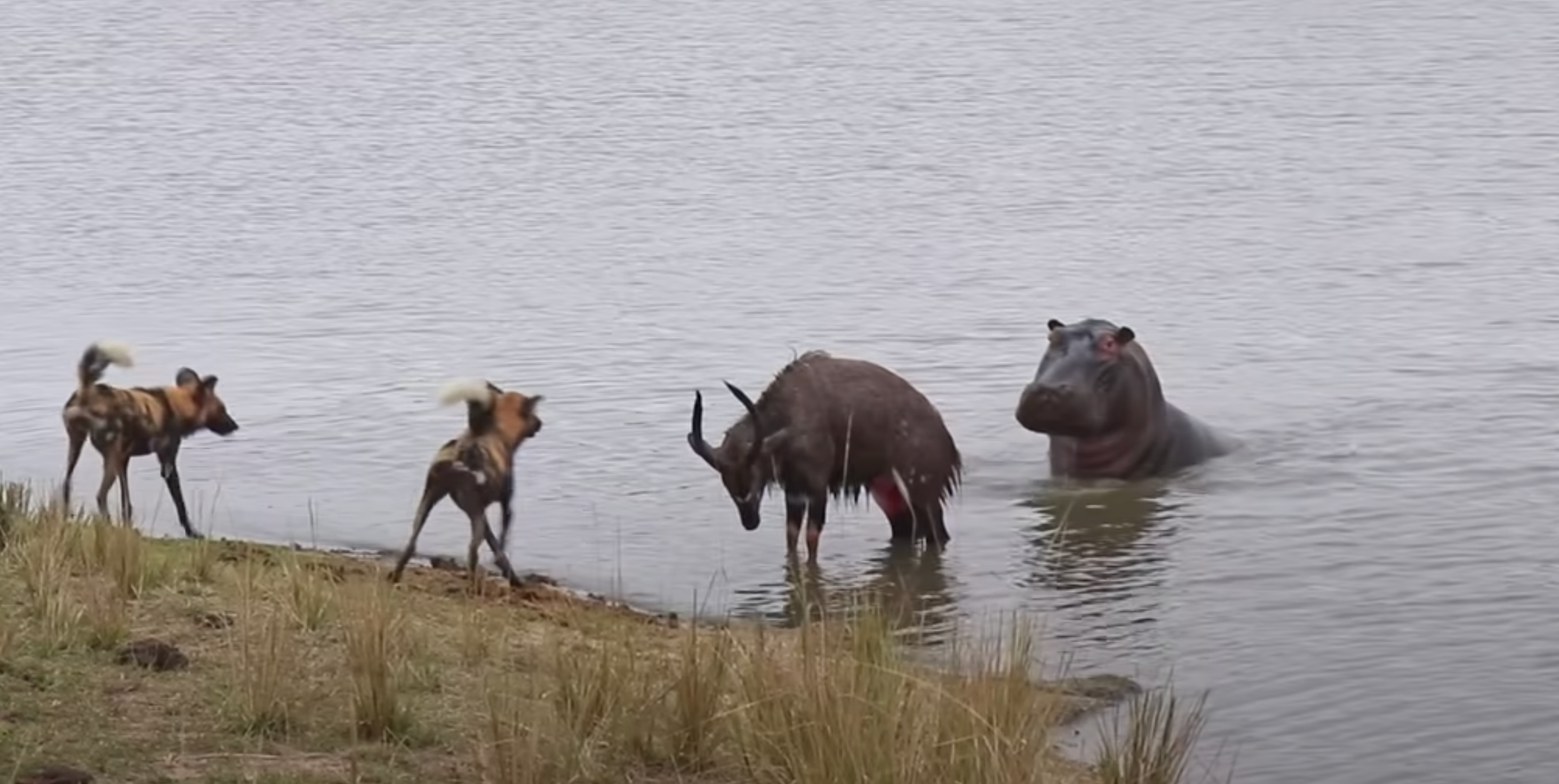 Sometimes the odds are stacked against you, as was the case for this nyala bull that found itself caught between two rocks, a hard place, and a ruthless reptile. A video that was recorded in South Africa’s Kruger National Park last month shows the buck fighting off a pack of wild dogs and a hippo, only to be eaten by a crocodile.

The video begins with the nyala bull facing off against the two wild dogs. The bull’s back right leg is already wounded, and it keeps its attention on the dogs as it steps back defensively into the large watering hole.

But the antelope has another, much larger predator to worry about. Three seconds into the video, you can hear the telltale sound of a hippo clearing water from its nostrils, and as the camera pans out, the hippo is already approaching the bull from behind.

“Wow, look at that hippo. Oh my god,” one of the onlookers says right before the hippo charges. The bull hears it coming and spins around, using its antlers to land a well-placed jab underneath the hippo’s lower jaw.

The hippo then retreats underneath the water as the bull turns back to face the wild dogs still barking from the shore. Two more dogs join the pack, and they keep the nyala’s attention while the hippo lays low and keeps its distance. The bull does an impressive job keeping the dogs at bay while staying clear of the hippo, but as soon as it looks like the antelope might get out this pickle alive, yet another predator moves in for the kill.

As the bull faces the dogs on the shore with its legs submerged, a massive crocodile approaches stealthily from behind—its eyes and snout barely exposed above the water. Catching its prey off-guard, the crocodile lurches forward and sinks its jaws into the bull’s left hindquarter. The antelope lets out a moan as it hits the water, but by this point it’s already caught in a death roll. The game is up.

The video was recorded in August by field guide Wayne Myburgh while on safari in Kruger National Park. Myburgh shared the footage with Latest Sightings and said it was one of the more awesome encounters he’s ever witnessed during his 13 years guiding safaris in the bush.

“It was a usual morning drive and we heard that wild dogs had just chased a nyala bull into Quelea Dam,” Myburgh explained. “Knowing about the presence of a crocodile and about 12 hippos that live there, we knew it could get interesting and made our way there.”