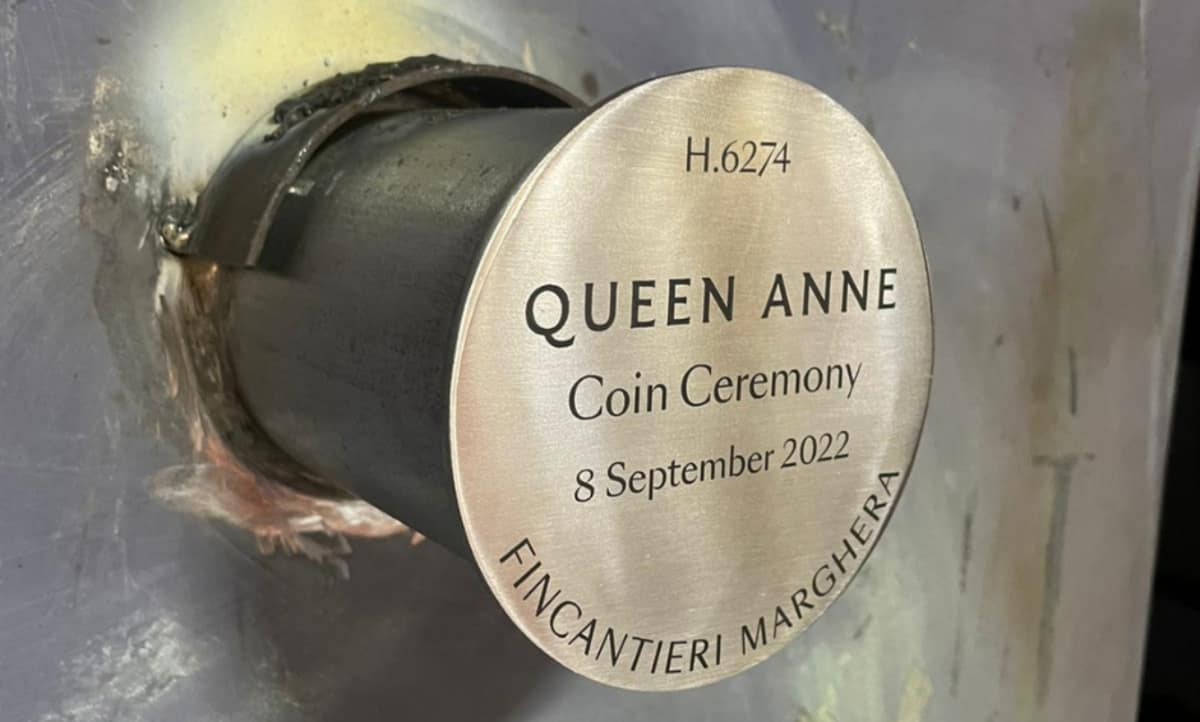 Queen Anne, Cunard’s newest cruise ship, reached another important milestone in her construction as the keel was laid down in a ceremony at the Fincantieri shipyard in Marghera, Italy.

The honor of welding the ceremonial coin to the keel went to Captain Inger Klein Thorhauge before the large section of the ship was placed next to the ship’s superstructure. After cutting the first steel, the keel laying ceremony is the next important step in constructing a cruise ship.

Cunard Line’s newest cruise ship, the 113,000 gross tons, 3000-passenger Pinnacle-class Queen Anne, has reached the next step of her construction as the keel was laid down today.

During an event at the Fincantieri shipyard in Marghera, Italy, cruise line and shipyard officials celebrated the occasion with the traditional coin ceremony.

During the coin ceremony, Captain Inger Klein Thorhauge welded a coin into the keel, which will stay there for the lifetime of the vessel. Besides being an essential step in constructing a new cruise ship, the coin ceremony also has a ceremonial function. The coin will provide the ship and all those who sail on her with good luck.

Cunard said this on its Facebook page: “Our Keel laying ceremony is underway at the Fincantieri Marghera shipyard in Venice! A ceremony steeped in tradition, bringing luck to the ship during construction as well as her Captain and Crew, marking the formal start of construction.”

While the coin ceremony is undoubtedly a step in the right direction, it will be a while still before Queen Anne sails with guests. First announced in 2017, the first cruises onboard Cunard’s newest cruise ship are scheduled to set sail at the start of 2024, with construction completion scheduled for the end of 2023.

Once construction has been completed and the Fincantieri shipyard hands over Queen Anne to Cunard, she will become the fourth cruise ship operational in the Cunard fleet.

Other ships that sail under the iconic cruise company are the Queen Mary 2, Queen Victoria, and Queen Elizabeth. Queen Anne is the 96th passenger ship to sail under the Cunard flag and the 249th ship in total, including cargo ships and others.

Earlier this year, Cunard announced the first set of sailings for Queen Anne; she will sail on her maiden voyage on January 4, 2024, from Southampton in the United Kingdom.

There will be one overnight call in Lisbon, Portugal, and two days at sea before and after the port call so guests can fully explore all that the vessel has to offer. She will be welcomed back to Southampton by her sisters, Queen Mary 2 and Queen Victoria.

On January 27, Queen Anne will embark on a 35-day Caribbean cruise from Southampton. She will set off in the direction of Ponta Delgada in the Azores, followed by her maiden call in the United States on February 7 in Port Canaveral, followed by a call to Fort Lauderdale.

From the US, Queen Anne will set sail to the Caribbean with calls to St Thomas, St. Maarten, St. Kitts, Barbados, St Lucia, Antigua, and the British Virgin Islands. On the return voyage to Southampton, the ship will make calls to Fort Lauderdale and Bermuda.

POTD: A Distant Relation to the Mauser 1914