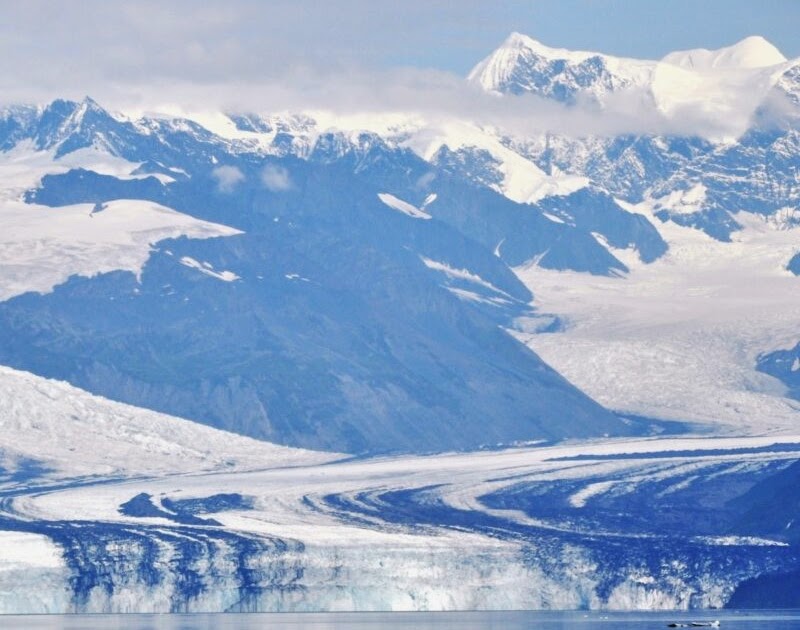 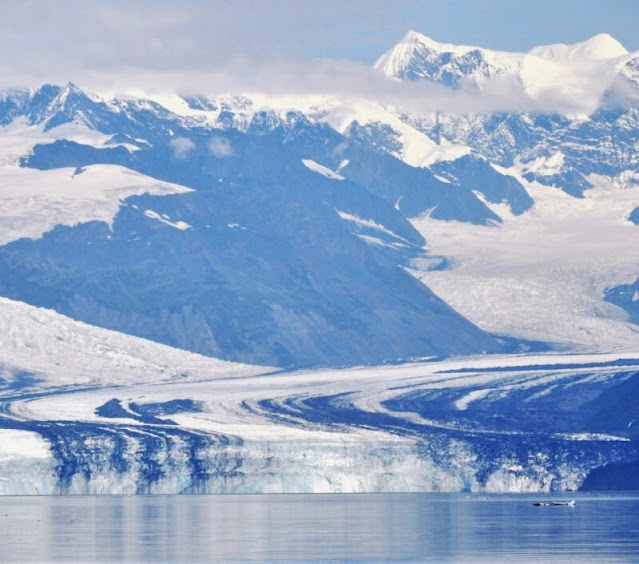 The full
article was published in Travel
Awaits on Dec. 30, 2021

On our first
trip to Alaska, we made a detour to Valdez in the southeastern corner. Then
from Anchorage, we did day trips to the towns of Whittier and Homer. And on the
way back to the Lower 48 through British Columbia, we found the tiny town of
Hyder. The next year we went to the towns of Kenai/Soldotna and Seward. This is
the second of two articles on my favorite small towns in Alaska, covering the
south. The northern towns were featured previously in 6
Quaint Small Towns To Visit North of Anchorage, Alaska.

We completed
navigating the famed Alaska Highway in a week. After a night at a campground in
Tok, Alaska, we woke up to a day covered with smog from the forest fires that
were raging all around. Quickly we postponed seeing my husband’s youngest in
Anchorage for a few days and drove to Valdez in southeastern Alaska first. 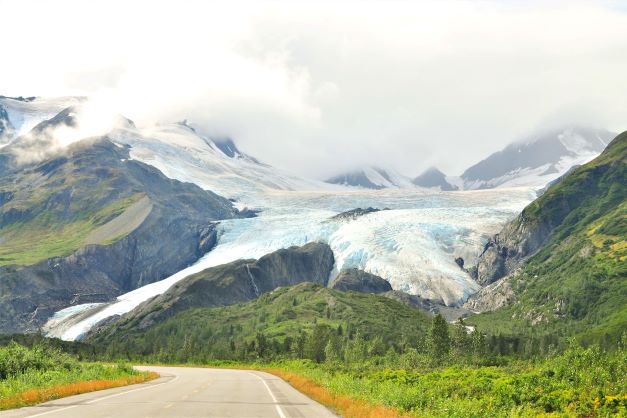 There were a
few showers on the way there; the air was damp and a lot of fog hovered around.
Soon we lost our cell signals and broadband communications. Suddenly, as our RV
negotiated a bend, a large white mountain appeared before us: It was
Worthington Glacier, and one could walk to it from the roadside! My husband was
gone in a jiffy, bringing back a chunk of blue ice that I quickly deposited
into our freezer.

Thirty
minutes from Worthington is the quaint little fishing town of Valdez
(population of almost 4,000). Low-lying clouds encircled the town and the lovely
marina. The “longest boat ramp in the world” reached far out into the waters
teeming with pink salmon spawning nearby. Eager fishermen lined the banks
around Allison Park where we camped.

Up in the
hills where the trails wound, we came across a section of the Alaska gas
pipeline. But more remarkably, we saw three young men in flip-flops hauling a
canoe, heavy with provisions and equipment, up the steep trail to camp in the
mountains. And the hiking trails were filled with berry bushes that the bears
had clearly ravaged earlier.

Pro Tip: On
the way back, if you have time, visit Wrangell-St Elias National Park, which
hosts the Canadian Rockies’ highest point, or, nearer to Anchorage, walk on the
27-mile-long Matanuska Glacier. 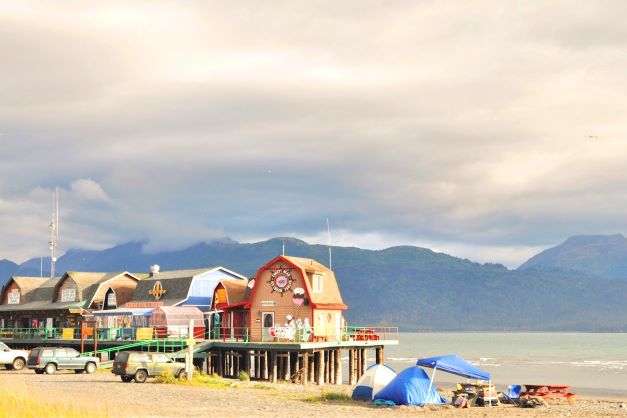 Anchorage
was the neat city we expected it to be. From there, our extended family group
took a trip to Homer, Alaska, the “halibut fishing capital of the world,” at the
southwestern tip of the state, with over 5,000 in population. It has a famous
spit jutting out into the cold blue waters of Kachemak Bay.

There, my
husband and his eldest grandson fished to their hearts’ content. At night we
let a chef serve us a fish fest. The next day we went hunting for souvenirs and
good eats at the quaint shops and restaurants perched in colorful entrancing
huts above the waters along the shore. Afterward, I could not resist having my
photo taken with the largest halibut (almost 200 pounds) caught in a derby that
day.

Pro Tip: On
that second night we had a few drinks at the Salty Dawg Saloon on the spit,
famous for its ceiling and walls covered with currency. I posted my Philippine
peso 100 bill, and my husband and his daughter put up a U.S. dollar.

When the
grandson left to go back to his job in Hawaii, my husband, his daughter, and I
proceeded to experience the famous four-hour Inland Passage. A number of cruise
lines use Whittier, the charming gateway to Prince William Sound nestled
between glacier-draped mountains, as a departure port for these cruises. Only
about 60 miles southeast of Anchorage, Whittier is a very pretty town on the
western edge of south-central Alaska. Its population is about 200 people in the
off-season, which doubles during summer. It is separated from Alaska’s road
system by a 2.5-mile-long tunnel that is shared by alternating one-way auto and
railroad traffic. Quite an experience. 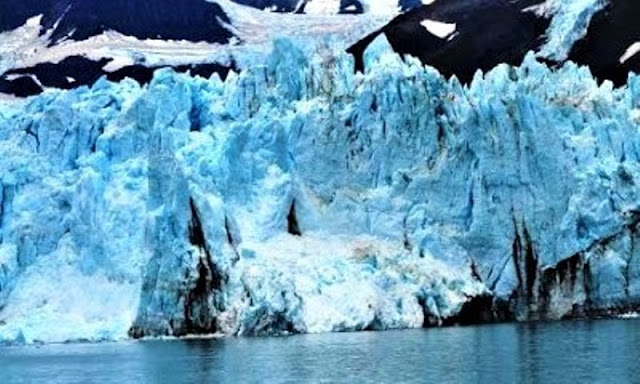 Our cruise
took us to see 26 glaciers up close, some rising to 1,700 feet above sea level.
We rode in a high-speed catamaran with huge picture windows inside two enclosed
decks (there are extensive outside viewing areas, too). The voyage visits
Resurrection Bay and the College Fjords. There were lots of sea otters, seals,
porpoises, sea lions, and whales. We were fittingly surprised as we approached
Surprise Glacier, a very blue tidewater glacier, pieces of which were floating
on the icy waters around the vessel (think shades of Titanic). When the crew
served glacial blue margaritas from ice they harvested, we had a party!

On the way
down to the Lower 48, we took the Stewart-Cassiar Highway through northern
British Columbia. I did not see a glacier-topped mountain until the turn to the
town of Stewart, British Columbia, toward the coast, where there was supposed
to be good fishing.

There was
nothing commercial about the town of Stewart/Hyder. No one wanted to take Bill
out fishing because it was already a day after the season. I was so disappointed
until we found out that, only two miles away, was the intriguing tiny town of
Hyder. The little town of about a hundred people surprised us with two
unplanned and unforgettable experiences: Salmon Glacier and Fish Creek. 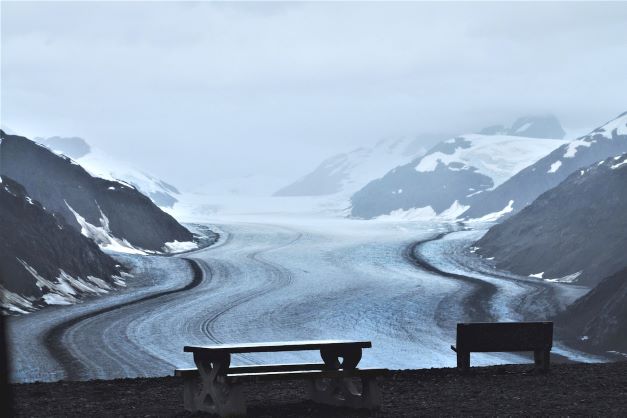 Salmon
Glacier is the fifth largest glacier in North America, and as we went up the
hill (15 miles) from downtown Hyder and Stewart, it slowly made its appearance.
The pictures I took could not capture the entire extent; they could not do it
justice. And the price we paid was high. The road was dirt-gravel all the way;
and since it was also raining, it was muddy dirt/gravel! I can only imagine the
brutal punishment we gave our small Class B motorhome. But there was no other
way to get there.

Fish Creek
Bear Viewing Site, on the other hand, right at the foot of the hill, had a
sideshow waiting for us. A good-sized black bear showed up, and for about 39
minutes hunted for and devoured all the salmon he could find. My husband and I
were clicking our cameras non-stop. At times he was a mere 20 feet away. Good
thing we were hidden; he put on quite a show! 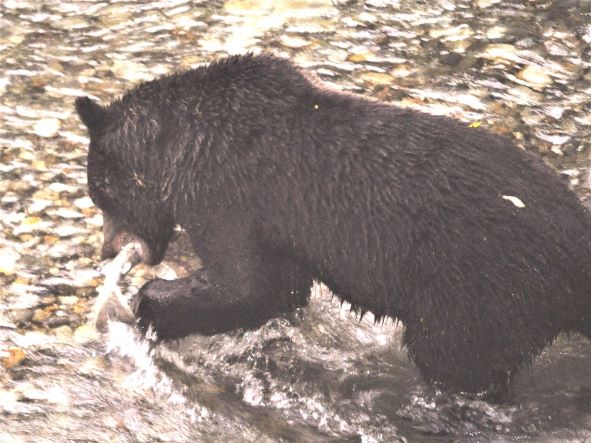 The
following year, we went back to Alaska for the wedding of my husband’s
daughter! When the couple went on their honeymoon, we tried to replicate with
the grandson the fun times we had the previous year. We drove to the twin towns
of Kenai (population 7,000) and Soldotna (population 5,000) at the mouth of the
famous Kenai River on the Kenai Peninsula, just slightly off the same road we
took to Homer the previous year. 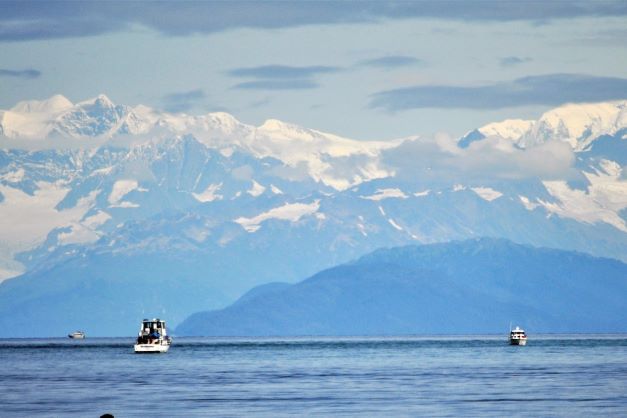 Being late
in the summer, however, it was already colder, wetter, darker, and windier.
There was not much fishing to do in this renowned fishing area of Alaska. Even
the snow-capped mountains seemed farther away, hidden by haze so that the
pictures we took were not as bright. In Soldotna, the only thing that caught
our attention was that the local Fred Meyer, where we camped for the night, had
a complimentary dump and potable water stations.

But we
discovered an entrancing and historic church built at the turn of the 19th
century when the land was still under Russian rule. Alaska only became a state
in 1959 after Russia sold it to the U.S. The Holy Assumption Russian Orthodox
Church in the Old Town of Kenai was so endearing. We even found a set of
wedding crowns we could don for a picture.

Pro Tip: On
the way to Kenai/Soldotna, you can get the best-smoked salmon chowder you will
ever find at the historic Gwin’s Lodge in Cooper Landing.

The next
morning, sensing my disappointment in the weather, my husband headed off to the
other side of the peninsula, to the town of Seward (population 3,000) at the
mouth of the Kenai Fjords National Park instead of going back to Anchorage.
Another lovely cruise ship town nestled between the mountains and the fjords, I
felt that Whittier was prettier though smaller. It was already off-season,
however, so there was hardly a soul on the Seward waterfront. But the boats
were all still moored in the marina, and the shops were still open. And tours
to the Kenai Fjords were still available. 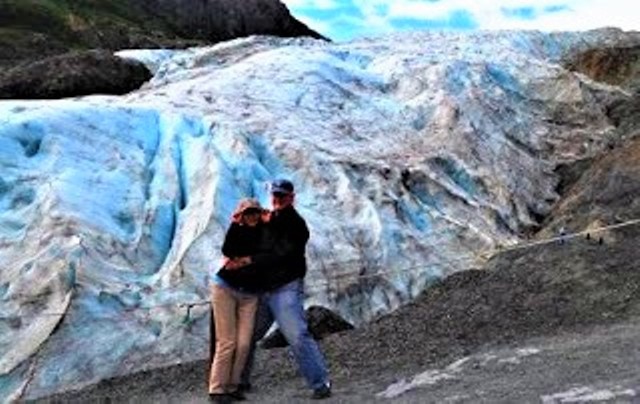 Upon leaving
town, a sign led us to a certain Exit Glacier only eight and a half miles west.
Of course, we took the detour. We found out it is part of the 500-square-mile
Harding Ice Fields and is so named because it has been receding slowly since
the earliest recorded terminus in 1815. There were recordings all along the
way; the last about two miles from the present one. You could imagine the
former size of the glacier from the marshland it was creating at its feet. And
I got a second chance to walk on the glacial ridge. I finally summoned the courage.
But it was so cold; it felt like I was inside the freezer. I turned back after
the quick photo op!

Such are the
charming discoveries we continue to make all over beautiful Alaska. It’s a
place where disappointments don’t last long!

Our Favorite Class B RVs for Van Life Camping World

5 Tips for Selling Your Toy Hauler