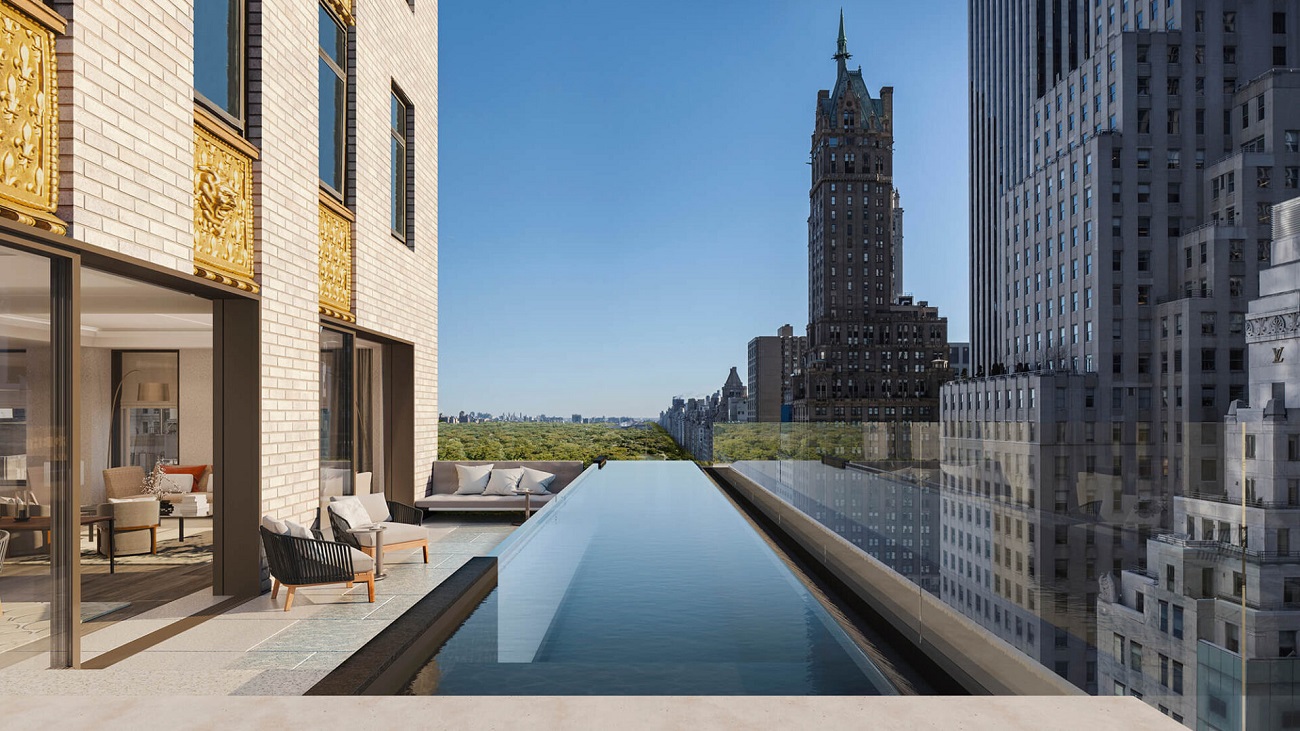 More than 5 years after the prestigious project was announced, Aman New York has finally opened on August 2nd, ushering in a new era for hospitality in one of the world’s greatest cities. With 83 suites and 22 residences, the Aman group brings the peace promised by Aman’s Sanskrit-derived name to the heart of Manhattan. The hotel is the second in a new, pioneering generation of Aman properties in urban settings, following in the footsteps of Aman Tokyo and taking the brand to 34 properties worldwide. Aman New York also joins Amangani in Wyoming and Amangiri in Utah as the brand’s third destination in the United States; the trio will soon be accompanied by Aman Miami (opening in 2024).

Vlad Doronin, Chairman and CEO of Aman says: “Following the success of the multi-award-winning Aman Tokyo, our strategy to bring the coveted Aman lifestyle to urban destinations continues apace. A milestone opening, Aman New York marks our greatest investment into a single destination to date. The hotel introduces an entirely new concept to the city through expansive and unmatched amenities, which propels the brand forward, delivering a guest experience like no other.”

Reservations are open and rooms can be booked online on the official Aman New York website, with only a limited selection of suites is available through the end of the year (with further inventory unveiled on an ongoing basis). Although room rates officially start at $3,200 USD per night, they’re currently going for an insane $4,200 per night for most weeknights and up to $5,500 per night on weekends through the end of 2022, making Aman New York the world’s most expensive city hotel by a long shot (Aman is clearly testing the market here). Nonetheless, the hotel is fully booked for most nights in the coming two months, and the hotel claims to have a waitlist of loyal guests.

Here’s a first look inside the spectacular new hotel.

Aman New York is housed in the iconic Crown Building in Manhattan, which has presided over the midpoint of Manhattan – the corner of Fifth Avenue and 57th Street – since 1921. The building is designed by Warren & Wetmore, architects of some of New York’s most influential buildings, including Grand Central Station and the Helmsley Building. Formerly the first home of the Museum of Modern Art, the 100-year-old building has undergone a monumental transformation, which has seen it fully restored to its original splendor, marking its next chapter as an urban Aman sanctuary.

On entering Aman New York, guests ascend to the hotel’s 14th floor, where a double-height atrium instantly instils a sense of grandeur, featuring some subtle Asian influences in tribute to Aman’s Asian roots. The property’s interior and decor by the world-famous designer Jean Michel Gathy of Denniston. Gathy is the visionary behind some of the most esteemed Aman resorts including Amanyara in Turks and Caicos; Amanwana on the island of Moyo in Indonesia; Aman Sveti Stefan, an island which once acted as a fortified village in Montenegro; and Aman Venice, where his striking designs all feature a unique signature – they focus on the theme of romance and on incorporating water features, as well as local cultural elements and traditions, into the property.

The property features 83 suites, which rank among New York’s largest and are inspired by the airy architecture of Aman’s properties in Southeast Asia. An invitation to switch off from the outside world, every suite offers a functioning fireplace, a first in New York City, while bathrooms are opulent and oversized with oval soaking bathtubs, marble rain showers and double vanities. Large windows offer dynamic views, and the use of organic, natural materials and muted tones brings a sense of balance and harmony reminiscent of that found in Aman resorts of the East.

In a further nod to the brand’s roots, each suite also features a large-scale art mural inspired by the 15th-century masterpiece Pine Trees (Shōrin-zu byōbu) by Hasegawa Tōhaku. One of Japan’s most celebrated works, Pine Trees, owned by the Tokyo National Museum, was designated as a National Treasure in 1952 and is internationally acclaimed. The piece perfectly captures its eminent pre-Edo influence, and is a homage to Tōhaku, printed on delicate rice paper and spanning the walls as a captivating focal point.

On the building’s 11th and 12th floors, 11 Grand Suites can be configured with additional bedrooms to create family-sized spaces, while two Aman Suites offer the pinnacle of urban Aman living with views of 57th Street and Fifth Avenue, living and dining areas with tables for six, kitchenettes with counter seating and large walk-in wardrobes.

Bringing to life the fullest expression of the Aman Wellness concept yet, Aman New York’s Spa is the brand’s new flagship integrative wellness destination in the western hemisphere. Spanning three storeys, the spa offers a full spectrum of wellness-enhancing facilities, centered by a 20 m (65 ft) indoor swimming pool flanked by firepits and daybeds and warmly lit by the glow of magnificent copper light installations.

For those seeking a dedicated wellness experience, two vast Spa Houses comprise double treatment rooms, Banya and Hammam rooms, and private outdoor terraces with hot and cold plunge pools, daybeds and fireplaces. Available for private use, the Spa Houses are comparable to those of Aman’s remotest retreats and introduce a totally new concept to the city.

While the hotel follows in the trailblazing footsteps of Aman Tokyo, the brand’s first urban property which launched in 2014, it also represents the start of a new chapter for Aman, welcoming the very first urban branded residences. A collection of 22 incomparable private homes, including a five-storey penthouse, the fully serviced residences offer an unrivalled address and a complete immersion in the Aman lifestyle, in harmony with the unceasing heartbeat of their surroundings.

Aman was founded in 1988 with the vision of building a collection of intimate retreats with the unassuming, warm hospitality of a gracious private home. The first, Amanpuri (place of peace), in Phuket, Thailand, introduced the concept and, since then, Aman has grown to encompass 34 exquisitely serene hotels and resorts in 20 destinations across the world, with a further nine projects in the pipeline. In such spectacular settings, Aman has honed its offering with its transformative influence on mind, body and spirit through harmoniously designed environments transporting guests out of their everyday lives. Twelve properties also offer private branded Residences: sanctuaries that go beyond commonplace notions of luxury allowing a select few to make the Aman way of life a permanent reality.

In recent years, Aman has grown to offer its coveted lifestyle beyond the parameters of its havens. In 2018, the introduction of Aman Skincare continued the brand’s holistic influence, offering beautiful, scented formulas using powerful all-natural ingredients and inspired by Aman Spas. The introduction of Sva – a range of supplements designed to help maintain optimum health – and Aman Fine Fragrance in 2020 continued this journey, bringing Aman into the comfort of home. This sentiment was echoed in 2021, with the arrival of a new retail collection, The Essentials by Aman, comprising timeless ready-to-wear pieces that answer the needs of every Aman guest.

With innovation a cornerstone of the brand’s philosophy, in 2020 Aman welcomed a new hotel brand, Janu – meaning ‘soul’ in Sanskrit. Janu offers a unique take on hospitality where genuine human interaction, playful expression and social wellness are at the core of the experience. Janu aims to bring balance to the head and heart and rekindle the soul. Three forthcoming Janu hotels are already under construction: Tokyo; AlUla in Saudi Arabia and Montenegro.

Mauritius Hotels to Indulge In

Where to See Baby Whales in Mexico