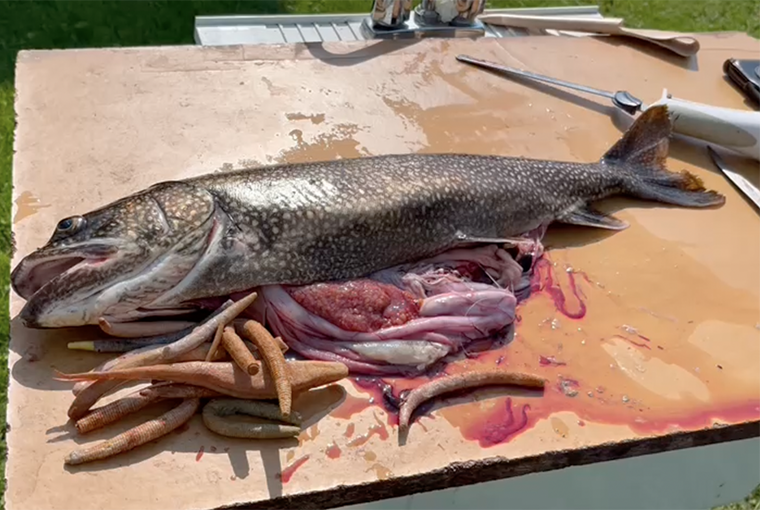 “It was amazing that the lake trout was still hungry enough to bite my Johnny Green lure,” the Williamsburg (South Dundas) resident said via email. “I was completely shocked when I was cleaning the fish and this rubber rolled out of its belly.”

The eight ounces of plastics the 62-year-old found on May 31 was not the first surprise provided by the lake northeast of Kingston, either. Casselman, who has fished Charleston on and off for four decades, found three plastics in two other lakers there six or seven years ago.

Now, the angler – who began fishing at age eight with his dad for St. Lawrence River brown bullhead catfish at Upper Canada Village – is taking the opportunity to raise awareness and remind anglers not to throw plastics or old baits of any kind overboard.

“Remember that more important than live release, is doing your best not to add foreign material that would affect the livelihood of a fish and/or an animal,” Casselman wrote.

The discovery came as less of a surprise to Ontario Federation of Anglers and Hunters (OFAH) Fisheries Biologist Adam Weir, who pointed out lakers are an “integrator species” that recycle energy and nutrients between shallow and deep waters.

“During certain times of the year, they’re likely encountering lures that are traditionally used for bass and gulping them up in shallow waters,” he explained. “Anglers often use set lines for lake trout with a bait positioned on the bottom and, by comparison, a Senko or other soft plastics resemble this sort of presentation.

There’s plenty of literature available on the subject – some research focuses on deposition rates and the fate of soft plastics in the environment and stomach content analyses looking at ingestion rates, for example, has been done on different species of sportfish, Weir said. Other research has explored the biodegradability of soft plastics and the impact on fish health.

“Because of spatial, temporal, and interspecific variation, it’s difficult to apply any sweeping conclusions, but it is clear that soft plastic lures are on the radar of academics, conservation organizations, and government agencies,” he wrote.

The evidence suggests the best practice of using an O-ring to prevent losing soft plastics has mixed results, Weir said.

“Strategies like this are a step in the right direction, but it will take bigger strides from industry and manufacturers to provide more environmentally friendly options for anglers that match the current price point, as well as equal or exceed the performance of traditional soft plastic lures.”

Some jurisdictions have tried to enact bans on soft plastics – a knee-jerk reaction that won’t work or be well-received by the angling community, he added. “Public awareness campaigns for anglers and providing suitable alternatives will go much further in changing behaviour and conservation outcomes in the long run.”