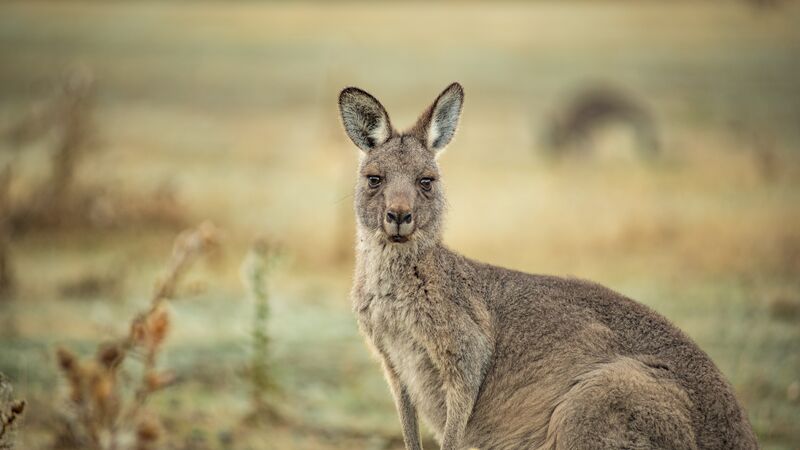 The Red Centre might be famous for its epic outback landscapes and natural wonders like Uluru, but you might also get to meet some of these local residents on your journey.

If you close your eyes and think of Australia’s Red Centre, you might picture Uluru rising majestically from the red earth, plummeting red cliffs, rocky plains and long roads surrounded by, well, a whole lot of nothing. It’s hard to imagine how life could survive in such a harsh environment, let alone thrive. But hidden within the nooks and crannies of some of the most arid places on earth, you’ll find life in many shapes and forms. Nature is awesome, right?

Kings Canyon and Uluru Kata Tjuta National Park are home to diverse ecosystems from lush spring-fed watering holes to secluded gardens enclosed within leafy bush. Not only have these animals who live here found unique ways to survive through their evolution, but they’re highly sacred to First Nations cultures and play an important role in Dreamtime stories.

Here are nine native animals to look out for on your Red Centre adventure.

Never judge a book lizard by how many scary-looking spikes it has on its body. The thorny devil is part of the Dragon Lizard family, and although its appearance might suggest otherwise, it’s a harmless and timid critter that likes to keep to itself. The thorny devil enjoys sunning itself, particularly in winter, so you’re more likely to see it hanging out on rocky outcrops. Coming in at a tiny 20 millimetres in length, you’ll need to look extra hard if you want to see one!

The emu is a sacred animal to First Nations peoples and appears in many Dreamtime and cultural stories. You might even see an ancient emu rock carving on the rock faces during the Uluru base walk. Coming in at a huge 190 centimetres and a mighty 55 kilograms, it’s the second-largest bird on earth (after the ostrich) and has a big, curvaceous body, soft brown feathers and large pointy beak. They can’t fly, but boy can they run – an impressive 50 kilometres per hour (which is faster than Usain Bolt, the world’s fastest man!). Emus roam freely so you’re in with a good chance of seeing them.

For the Traditional Owners of Uluru – the Anangu people – the mala is believed to embody the spirit of ancient Anangu ancestors. Mala used to be one of the most abundant marsupials in the Red Centre, but due to predators (mostly cats and foxes) and the reduction of traditional Aboriginal fire management, the mala is now extinct in the wild.

The good news is that Parks Australia has been working closely with Anangu people from the Mutitjulu community on a mala reintroduction program in Uluru Kata Tjuta National Park program since 2005. There’s now a healthy group of mala living within a feral-proof enclosure within the park, and the long-term survival of the species is looking promising.

Next up we have the red kangaroo. It looks different to other kangaroo species with silky, reddish fur and white fur on their belly and limbs. They’re also Australia’s biggest marsupials. Males can grow up to 2.4 metres tall and weigh 85 kg, while females are a bit smaller weighing in at 35 kg and two metres tall. Keep a lookout for these guys hanging out in the shade as you explore the trails. The red kangaroo is also an important food for Anangu and their leg tendons are traditionally used to bind wooden spears.

The dingo is an Australian icon and has roamed the Red Centre for over 3,500 years. It looks like a mix between a dog and a wolf – and instead of barking, it howls. You’re most likely to see them between dusk and dawn when they’re out hunting for kangaroos, reptiles and birds. Dingos are generally shy around humans, but if you’re camping, make sure you stow away your food as they’re certainly not shy of pinching food if it’s left out!

Similar to a rabbit with long ears and silky blue-grey fur, the bilby is probably one of the cutest marsupials you’ll ever see. They’ve lived in Australia for 15 million years and were once found in over 70% of the country, but this percentage has dropped to just 15% due to non-native predators, drier climates, and habitat loss. As nocturnal critters, they sleep during the day in a sophisticated network of burrows which they build with their strong claws. You’re most likely to see one after dark when they scurry out of their cosy burrows to hunt for termites, grass seeds and small insects.

Black-footed rock wallabies look different to other wallaby species with a silky grey face, a dark stripe running from the spine to the head, and a dark tail and feet.  They’re super agile and can run up to speeds of 20 kilometres per hour. Like bilbies, they’re nocturnal, so you have the best chance of seeing one at dusk and dawn when they’re out foraging for leaves, grass and fruits. They’re also shy, so your best bet is to crouch behind a rock (and make sure you’re quiet!) if you want to catch a glimpse.

If you hadn’t already guessed, the blue-tongue lizard is named after its bright blue tongue which often juts out of its mouth. They don’t move very fast as they have big heads, long bodies and small legs, so their diet mostly consists of insects, vegetation and sometimes other lizards. You’re most likely to see one on a rock as they sun themselves to warm their blood. The blue-tongue lizard is part of the Anangu story of the Lungkata – a greedy and untrustworthy blue-tongue lizard that teaches us what happens when we steal from others. You can learn more about this story on the Lungkata walk.

With bright green skin covered in small white spots, it’s easy to spot a Centralian frog if you’re lucky enough. Despite its name, keep your eyes peeled on any rocky crevices (and not up in the trees), as they enjoy dark, moist and warm environments. You have a good chance of spotting these little guys (and other desert frogs) in the summer months after some decent rainfall – or in the days leading up to it as they have an awesome ability to know when heavy rains are coming.

If you’re curious about these native critters, check out our Uluru and Kings Canyon tours. Or read out

Intrepid Women’s Expeditions are back for 2022

Six years ago today, I was totally broke.

Six years ago today, I was totally broke.