A Quick & Dirty Guide to the Cordillera Blanca Traverse 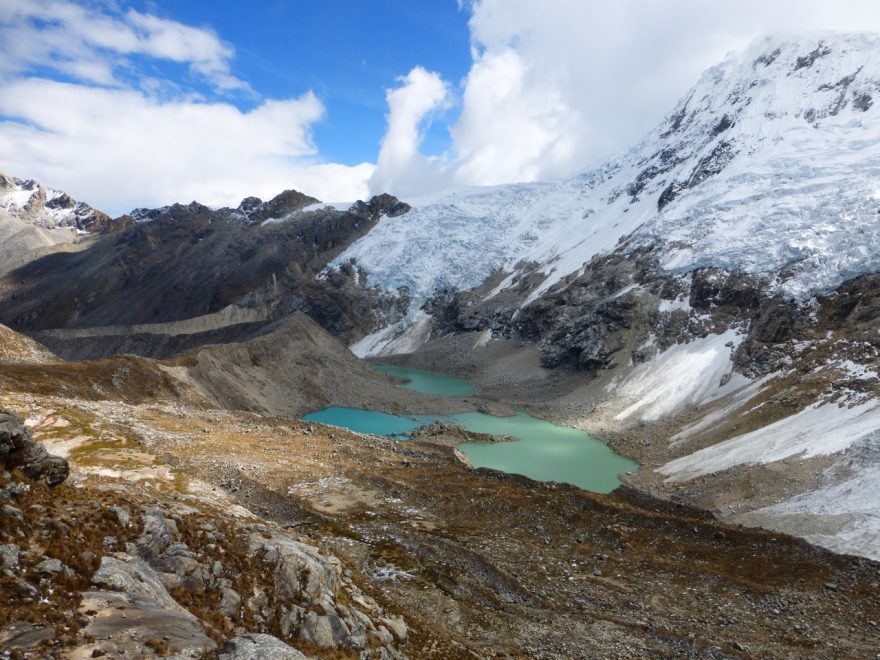 In the summer of 2014, I put together a traverse of Peru’s Cordillera Blanca. One of the world’s highest and most beautiful mountain ranges, to the best of my knowledge, it was the first time that such a trek had been completed.

Beginning at the village of Hualcallan and finishing at Pastoruri Glacier, the route consisted of a combination of established trails, cross-country scrambles, and the occasional stretch along backcountry dirt roads. Measuring approximately 400 km (249 mi) in length, it took 16 days to complete and included more than 20 mountain passes ranging between 4,347 m and 5,201 m (14,262 ft-17,064 ft). After eight years and quite a few requests, I’ve finally put together a “quick & dirty” guide for the route (no point rushing these things 😉 ). The article includes GPS data, logistical tips, alternates, and trekking notes for the route’s four stages.

CBT Shout-outs: Before getting started, I’d like to mention two people in regard to the CBT – Austin Lillywhite and Ryan “Dirtmonger” Sylva. The former completed three of the trek’s four stages in 2017 and was kind enough to provide information on a couple of alternate routes. The latter is an old friend who, along with a pair of mates (Bobcat and Stef), completed the CBT in 2018 and has contributed updated logistical information, photos, and route options from their journey (Note: For more on Austin and DM see online resources below).

Growing up to 10 m (33 ft) high, Puya Raimondii plants are endemic to the high-altitude regions of the Peruvian and Bolivian Andes. They are the world’s largest Bromeliad and are known as the “Queen of the Andes.” (Stage 4)

For the purposes of resupply, I split the CBT into four stages (click on the links below for journal entries from 2014). Each of the stage trailheads is accessible by public transport, meaning that folks that aren’t interested in thru-hiking the CBT could potentially do one or more of the stages as stand-alone hikes (Note: Distances have been updated as of 2022, and will vary depending on route choices):

The CBT takes place in Parque Nacional Huascarán. For any multi-day hike in the park, you’ll need to obtain a trekking permit from their office in Huaraz (-9.53203, -77.52984) before setting out.

Cashan Pass in late August (5,157 m/16,919 ft) – One of the toughest of the CBT’s 21 passes, Cashan may be snowbound early in the hiking season (Note: The southern side of the pass still had quite a bit of ice/snow when this photo was taken) (Note 2: The pass is the little notch in the centre of the photo)(Stage 3)

How Long Will it Take?

After the initial climb out of Hualcallan, almost all of the CBT takes place above 4000 m (13,123 ft). I can’t emphasize strongly enough that this is a hike for which you need to be well-acclimatized before setting out.

In order to avoid possible issues with AMS (Acute Mountain Sickness), plan to spend at the very least two or three days in Huaraz (3640m / 11,942 ft) before beginning the CBT. During your stay in the regional hub, do some short excursions such as the Laguna 69 (-9.01074, -77.61178) and Laguna Churup (-9.48503, -77.42871) trails, both of which are easily accessed via public transport from Huaraz. If you have the time, I’d also suggest hiking the nearby Cordillera Huayhuash Circuit before the CBT. For more information on acclimatization, see Tips for High Altitude Hiking.

The village of Hualcallan is the starting point of the CBT. This photo was taken from the switchbacks above the village.

The rapidly-shrinking Pastoruri glacier, the southern terminus of the CBT.

On the route itself, you can wild camp pretty much wherever you like. That said, I’d avoid setting up too close to villages or shepherd encampments (which may be patrolled by territorial guard dogs).

There’s one full-service mountain hut along the route – Refugio Ishinca. Situated in the shadows of  Toclarraju (6,032m) and Polcaraju (6,110m) peaks, Refugio Ishinca was an unexpected bonus. Half expecting a semi-dilapidated backcountry outpost, what I got instead was comfy beds, good food, helpful staff, and even a solar-powered shower!

In Town: The regional capital of Huaraz has a multitude of options to suit all budgets. During my time in town, I stayed at the Hotel Churup, which I can highly recommend. Juan Quiros Romero and his family were excellent hosts, the breakfasts were first-rate, the rooms comfortable, and they stored my extra luggage when I was out in the boonies. Double thumbs up.

Regarding the other towns along the route, in Chacas, I arrived late and ended up staying at a dodgy place whose only redeeming feature was that it was centrally located. As for Chavin de Huantar, I stayed at the characterful Hostal La Casona on the Plaza de Armas. I’m 99% certain that this was the same place I stayed at in 1996, and for the sake of nostalgia, I couldn’t resist returning 18 years later. On the remote chance that they are reading this post, shout-out to my 1996 traveling/hiking companions, Sylvia, Fleischy, and Dave.

I put together the CBT route in 2014 with the help of the below-listed topo maps, Google Earth, and Jim Bartles’s classic Cordillera Blanca text (see below). When hiking the route, I used said maps and a Suunto M-2 compass for navigation. I also took along a Garmin Foretrex, with which I took waypoints of notable spots along the route.

FWIW, since 2015, Gaia GPS (together with Google Earth) has been my go-to mapping tool when planning these sorts of trips, though I’ve periodically used Caltopo when putting routes together in the States.

The collective crux of the CBT are the passes. Depending on route choices, there are between twenty-one and twenty-three in total, ranging between 4,347 m and 5,201 m. By any criteria, it’s a rollercoaster of a trip, with a lung-busting, knee-wobbling total elevation gain and loss of around 50,000 m (164,000 ft).

When putting the route together, the majority of the passes were marked on the above-mentioned topo maps. However, during the southern half of the trip, there were a handful that weren’t, and some of these represented the most challenging aspect of the planning phase. The passes for which I had no information at the time included Urus/Akilpo (5,040m), Ishinca/Palcaraju (5,201m), Shallap (5,001m), Cashan (5,157m), Rurec (4,350 m), Pucaraju (4,583 m), Maraytaca (4,611 m), Landslide (4,951 m), and Huarapasca (4,930 m). Please note that most of these names simply reflect adjoining peaks, valleys, or in the case of “Landslide”, a relatively recent geological event, and may not be the names used by locals for the same high points.

Here’s the list of passes (from North to South), with their respective elevations in parentheses. Stage 1 passes are in black font, Stage 2 in blue, Stage 3 in red, and Stage 4 in green:

In putting together this Q&D Guide, I plugged all the data I had into Gaia GPS, created a route, and came out with the following updated figures for distance and total elevation. For those doing the hike in the future, depending on route choices, final totals will vary up to 10 percent.

Artesonraju Peak (6025 m/19,767 ft) as seen from Quebrado Huaripampa. This is the peak that’s said to be the inspiration behind the Paramount Pictures logo. I’m not too sure about the veracity of this claim, though, for movie buffs, it makes for a good story.

Walking through the Punta Olimpica Tunnel (4,735 m), which is the highest vehicular tunnel in the world (Photo courtesy of Ryan “Dirtmonger” Sylva).

“Chester” – a local dog that followed me through the enchanted forest of Quebrada Akilpo, which was the longest woodland stretch of the CBT (approx. 8 km long) (Stage 2).

View from the narrow notch of Cashan Pass (5,157 m) (Stage 3) / MLD Exodus pictured (Note: As with MLD’s Burn and Prophet models, the original Exodus is notably smaller than the current iteration).

Outside a shepherd’s hut in Quebrada Rurec (Stage 3)

Looking back towards Quebrada Rurec from the slopes of Rurec Pass.

Overnighting in a shepherd’s hut during a stormy night (Stage 4) (Note: The quilt in the photo is my trusty Katatabatic Sawatch, which I’ve had since the 12 Long Walks trip of 2011/12, and which is still going strong more than a decade later).

Yours truly at Pastoruri Glacier (5,033 m) – the southern terminus of the Cordillera Blanca Traverse. The End.