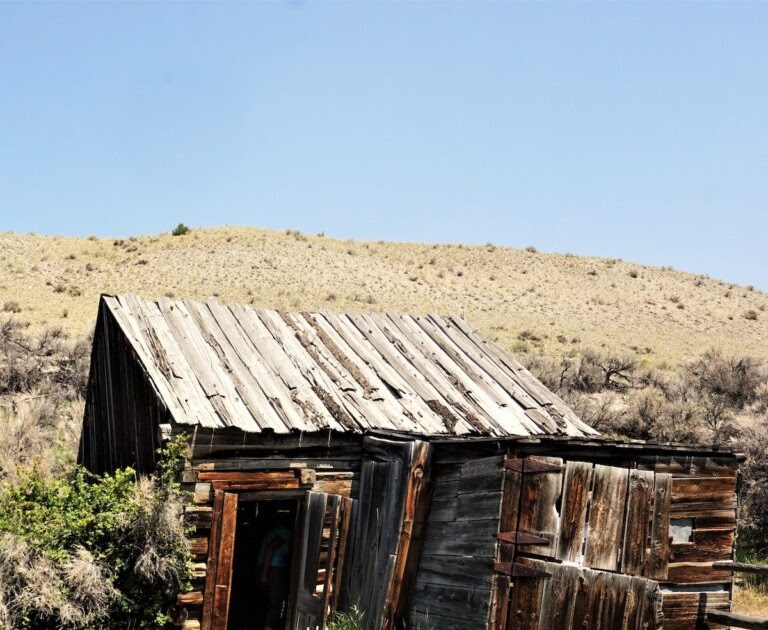 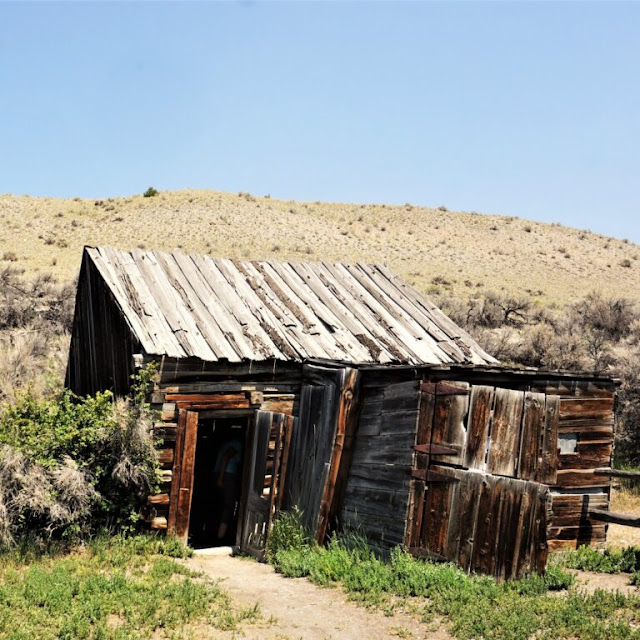 The complete
article
was published in Travel Awaits on Sept.
25, 2021

We have dear
friends who keep a mountain cabin in Essex, an unincorporated community of
about a hundred families between the park entrances called East and West
Glacier of Glacier National Park. Here are eight cool Montana towns we explored
during our visit with them. 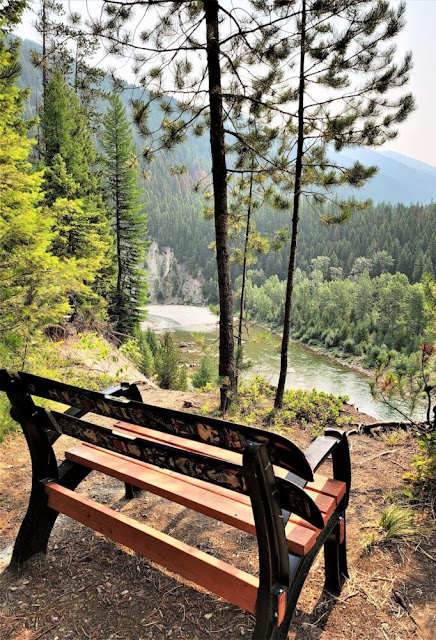 The first
thing we did was to pick huckleberries, “those more flavorful relatives of
blueberries that can only grow wild, not capable of being farmed, and costly to
bring to market…(on her) ATV we trekked up the hills, settling on a patch that
had not been picked. The bushes were thick with the prized fruit and we both came
home with little ziplock bags full of berries that eventually found their way into
delicious pancakes for breakfast.” Around the neighborhood, there were great A-frame
cabins, “a unique neighborhood “lending” library hanging from a tree, the
vistas of the Middle Fork of the Flathead River nearby, and a makeshift welcoming
center for visiting hunters.”

Hungry Horse, a little bigger census-designated
unincorporated community of about 600, is just 40 minutes northwest. The name
comes from the dam which serves the area’s water needs and is the hidden gem of a recreational
area the town hosts. We loved the Montana Fur Trading Company, a favorite
mountain arts store. We also found a unique camp of Jesus Is The Lord Church. The
catchment area of businesses in Hungry Horse includes the 400+ residents three
minutes north in the little town of Coram, Montana. That is where our other friends from Viewpoint camp on land
they own on a smartly laid-out RV lot. 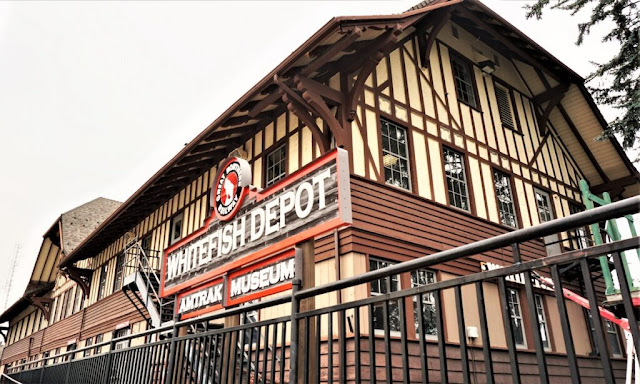 The popular
ski resort and tourist town of Whitefish where almost 8,000 live is just 20 minutes
northwest of Hungry Horse and 15 minutes away is its partner mountain city of
25,000, Kalispell.

In downtown
Whitefish, we spent some time in the Great Northern Railway Depot, the historic site of the still
operating Amtrak Station through which the following pass: the train rides of the Canadian Rockies and the
oil transported from the areas around Cut Bank. The Whitefish Museum is also
housed on-site with lots of memorabilia. Including “the historic Bruck
(bus+truck), a one-coach train that used to ferry people from the station to
local spurs. “

We also went
to the Whitefish City Beach. “Bushes thick with yellow flowers
created a pretty natural boundary for the parking lot. A pretty little cottage
housed a small visitor center and a nice stone sign marks the entry. Imagine
our pleasant surprise to come across and photograph a pair of whitetail Bambies
traipsing down the grassy area! “

Our friends
led us to the city of Kalispell, Montana for a place to have lunch since all
the restaurants were full in Whitefish. It has “all the conveniences of a good-sized
US city so if you cannot find it in Whitefish, go to Kalispell.” They also took
us to the most popular breakfast place in the area called NIckel Charles’ Restaurant and Casino. “Marvel at its transportation-themed décor hanging
from the ceiling and feast on the heartiest day-opener you will ever have.” 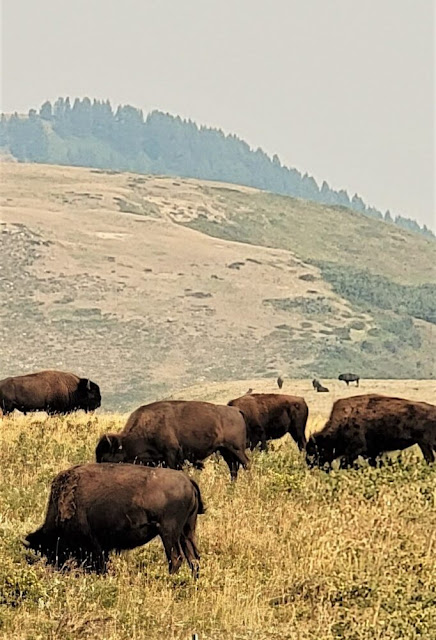 The
landscape changed when we drove east of Essex on the way to Calgary. “There appeared
hundreds of cattle grazing on great fields of grass. Soon, however, they
changed into herds of big bison! When you get to the town of Browning (population of about 1,000), you are sure to have reached a different
territory. It is the headquarters and the only incorporated town on the
Blackfeet Indian Reservation. There are the usual casinos and Native-American
shops.”

Cut Bank, with a bigger population of 3,000, is just 50 minutes east. The area’s oil
and gas industry started here in the 1920s.  A 27-ft. tall concrete penguin erected in 1989
proclaims it as the “Coldest Spot in the Nation” even if the record has been
surpassed by Alaska and Roger’s pass
north of Helena, Montana. The cool town of Cut Bank is a shortcut to the Sweetgrass-Coutts
border crossing just 50 minutes away. 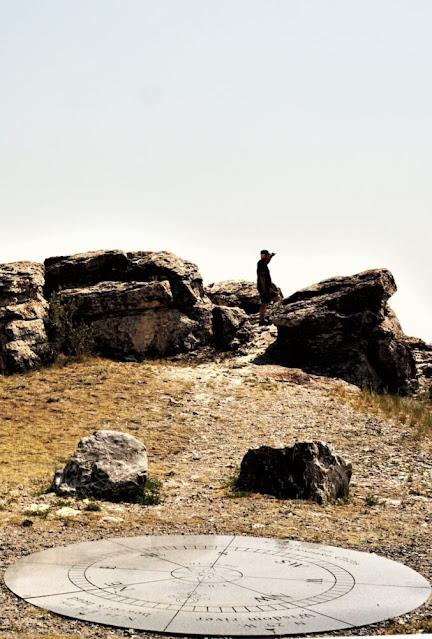 Dillon was
our overnight stop on the way from Boise, Idaho to Essex, Montana, and also on
the way down from Calgary after crossing the border.  We found the time to visit three cool places in
Dillon.

The Bannack
State Park is a
different kind of ghost town. “It is 1,600 acres at over 5,000 ft. elevation, complete
with all the deserted buildings of a town: a restaurant/saloon, a hotel, a
church, a school, the governor’s house, and many fine examples of mountain cabins
of the time. Here, you can really imagine Bannack’s bustling life during its
heyday.”

The Clark’s Lookout State Park sits atop a hill where William Clark
of the Lewis and Clark fame stood on August 13, 1805, and took compass readings
of three distant landmarks. In fact, there is an engraved compass face to mark
the spot.

The Atomic 79 Boots & Western Gear is a popular boot repair shop that
has turned into a huge outlet for all kinds of cowboy boots and other western
gear, like clothes, hats, mountain home décor, knives, etc. The store ships items
all over America.

On both
nights we stayed, we discovered great places to get a bite and feel the vibe. Old
folks congregated at Sparky’s Garage, while the younger ones frequented Mac’s Last Cast.